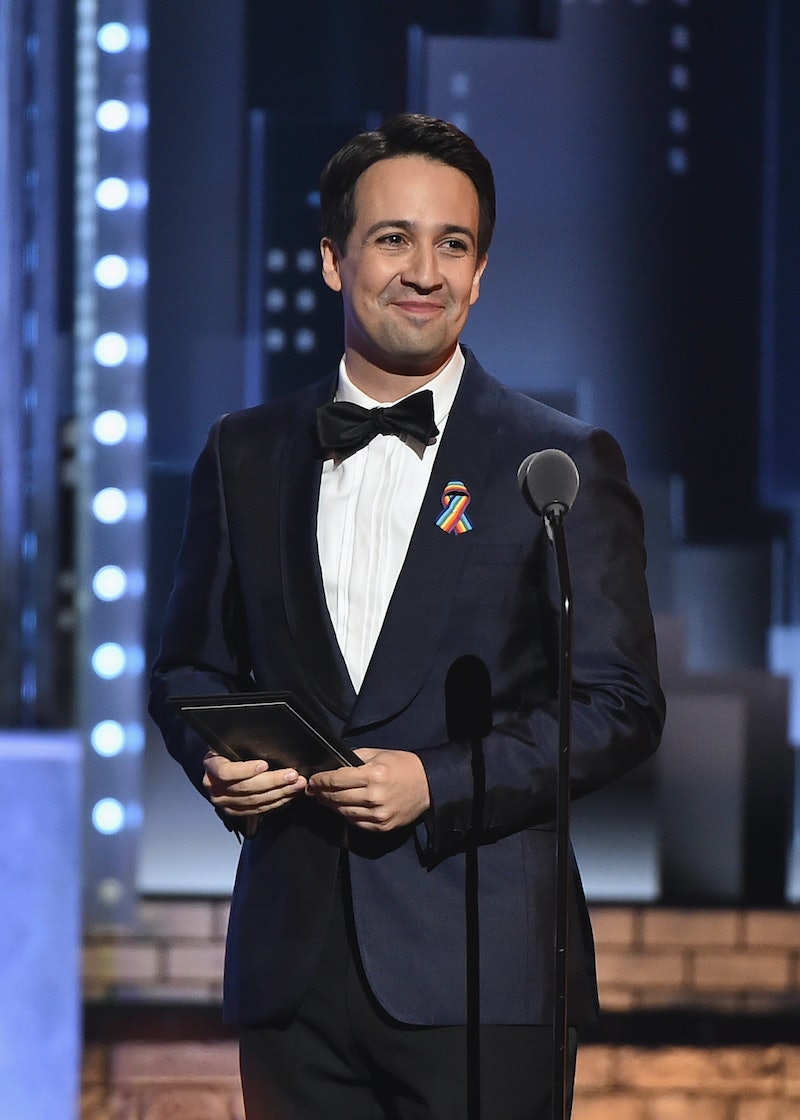 As the island of Puerto Rico continues to suffer from the devastation left behind byHurricane Maria, a new song can provide hope, strength, unity, and support to those affected by the tragedy. With just one listen, it's easy to discern that the lyrics of Lin-Manuel Miranda's "Almost Like Praying" reflect the resilient spirit of Puerto Rico.

In an effort to provide relief to the island, Miranda enlisted the help of notable entertainers such as Rita Moreno, Gloria Estefan, Jennifer Lopez, Marc Anthony, John Leguizamo, Luis Fonsi, Fat Joe, Gina Rodriguez, and Camila Cabello (just to name a few) as a means to exemplify the pride and essence of Puerto Rico. According to an Atlantic Records press release, all proceeds from the song will be donated to The Hispanic Federation's Unidos Disaster Relief Fund.

In terms of content, the upbeat tune offers a unique rhyming sequence which lists all 78 of Puerto Rico's municipalities. The song, which was written by Miranda, notably adapts its title and hook from the Leonard Bernstein and Stephen Sondheim’s “Maria” — a classic composition from the original Broadway musical, West Side Story which also happens to be a personal favorite of Miranda's, according to the press release.

With "Maria" at its backdrop, "Almost Like Praying" proves to be deep-rooted in terms of its origin. Not only is Maria, unforgettably, the name designated to the Category 4 disaster that ravaged the island, but the inference also borrows from the fact that the tale of West Side Story was one that incorporated a largely Puerto Rican cast.

The lyrics of "Almost Like Praying" immediately kick off with lines from the West Side Story tune with Hamilton creator Miranda belting out,

The song moves on as a bevy of notable artist join in to recite the names of all 78 of the territory's towns. "Despacito" crooner Luis Fonsi dives right in with:

The melody continues as Blades and Guerra demand that the song carries on as they sing out — "Otra vez!" Ortiz, Leguizamo, and Miranda agree in unison: "Yes!"

Blades and Guerra then get back on the track by continuing to list the names of the municipalities:

Miranda then revisits the hook, singing, "It's almost like praying." Soon after, Blades and J. Lo spread love for the land, harmonizing:

Then, Miranda returns with the hook:

Paying homage to the third largest underground cave system in the world, Dessa and Fat Joe shout out both the Camuy caves and the thermal springs of Coamo:

Then, Gina Rodriguez enters the declaration of love:

Ortiz adds, "Yauco," while Rodriguez mentions, "Cidra." Right after, Ortiz chimes in with "Añasco" and Rodriguez follows up with "Patillas." Together, the pair sings,

Ortiz, Anthony, and Fonzi all give the island shoutouts by singing, "Puerto Rico," and Rosa notes the facts that Puerto Rico is 100 miles long by 35 miles wide while speaking of the unity they share. He sings,

Anthony and Fonsi add another, "Puerto Rico," and so does Estefan. Moreno's "Así es" is followed by Estefan and Blades singing the island's name yet again. Fat Joe adds, "Puerto Rico! Ho! Ho!"

Blades throws in another round of:

Nazario gives a shoutout to Puerto Rico's beauty while professing her love for the island.

From there, there's a medley of Cabello, Anthony, and Lopez singing Puerto Rico's name. Ramos adds, "Viva." The song wraps as the Hamilton creator returns to the hook:

Recorded in several studios around New York City, Los Angeles, Miami, and Puerto Rico, Miranda reportedly traveled to each location to work one-on-one with collaborators of his "love letter" to Puerto Rico, according to Variety. The collective dedication put into the production of the song is a remarkable effort that's easily transmitted through the symbolic lyrics

As celebs jump in to lend a helping hand amidst the destruction left behind in Hurricane Maria's aftermath, "Almost Like Praying" does more than its part in adding a positive spin on such a tragic event.

More like this
Dan Levy Appears In The Latest Teaser For The Weeknd's HBO Series, 'The Idol'
By Jake Viswanath
Everything To Know About Taylor Swift’s 10th Studio Album, 'Midnights'
By Grace Wehniainen and Jake Viswanath
Tove Lo Is Still Crying On The Dance Floor
By Ivana Rihter
Everything You Need To Know About ‘Black Panther: Wakanda Forever’
By Bustle Editors
Get Even More From Bustle — Sign Up For The Newsletter