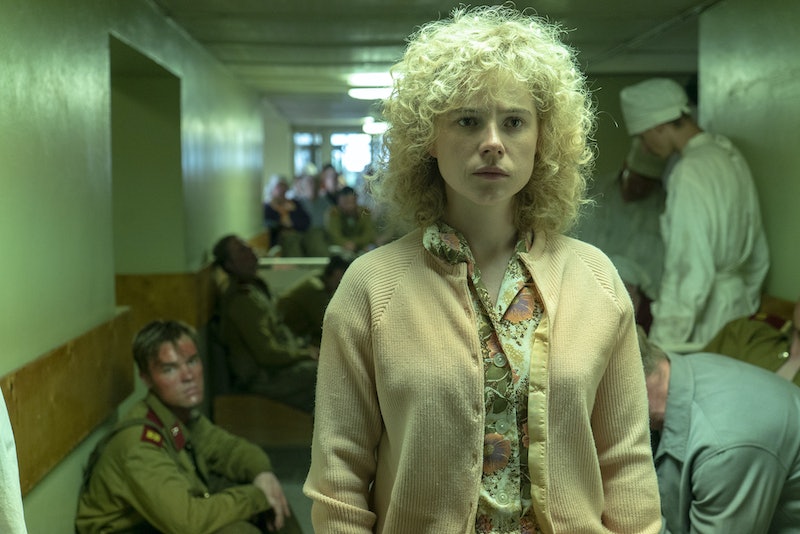 While the Chernobyl nuclear power plant disaster is a real-life event from history that still has repercussions today, watching the HBO miniseries may make you feel like it's too unbelievable to be true. But one character's story that is all-too-real is Lyudmilla Ignatenko's story from Voices from Chernobyl. The wife of the firefighter Vasily Ignatenko was introduced in the premiere episode of the miniseries as her husband was one of the first responders to the accident. Ignatenko is a real person who described her experience to journalist Svetlana Alexievich for her book Voices from Chernobyl: The Oral History of the Nuclear Disaster. And the creator of miniseries was so moved by Ignatenko's story that he had to feature it in Chernobyl.

Alexievich is a Nobel Prize winner in Literature for her "documentary novels," including Voices from Chernobyl. As Alexievich explained in an interview with the publisher Dalkey Archive Press, her book tells the stories of how individuals were impacted and less about the science behind the disaster. She interviewed more than 500 witnesses (only 107 are featured in the book) and it took her more than 10 years to complete.

The Guardian reported how the book was released in English in 2005 and Ignatenko's harrowing story of losing her firefighter husband due to radiation poisoning was included. You can hear part of Ignatenko's story read by an English-speaking actor in the NPR "All Things Considered" feature from 2006. And you can read her more complete account of the absolutely devastating effects the radiation poisoning had on her husband Vasily's body in The Paris Review.

Ignatenko and her husband were newlyweds when he died in 1986. She was only 23 years old and pregnant and, as Ignatenko tells it, she wasn't there when he finally passed away after being by his side almost constantly for the two weeks it took him to die. So while it's heartbreaking, it's understandable that Chernobyl creator Craig Mazin wanted to feature this story on the series to show the real human cost of the accident.

In the Chernobyl podcast, Mazin breaks down the fact and fiction of each episode of the miniseries. After the second episode, he explained what drew him to Ignatenko's story from Voices from Chernobyl and how he felt no need to alter it. "The actions that occurred that night are very much inspired by a story that she tells in the book," Mazin said. "I tried to tell it as accurately as I could because it is just incredibly moving and beautiful. I didn't really do anything to embellish it or change facts. I really just took what was there that she reported. And I found her story to be the most heart-wrenching of all the stories that I read because it was so much about love."

The actress who portrays Ignatenko in Chernobyl is Irish singer and actress Jessie Buckley. Buckley told the BBC how she didn't speak to the real Ignatenko before portraying her since Ignatenko "wants to get on with her life." But Buckley said she still did her best to do the true story justice. "I felt a huge responsibility playing Lyudmilla, I wanted to tell her story as honestly as I could," Buckley said. "I can't even imagine what it must have been like but I really hope I have managed to be as honest and truthful as I can so everyone can realize that lives were lost because of lies."

Mazin said in the Chernobyl podcast how there is a Swedish documentary about Ignatenko's story. He noted how it may be difficult for people to find, but it's something to look for if you've also been drawn in by her brave retelling of these events. As Ignatenko wrote in Voices from Chernobyl, "It's impossible to talk about. It's impossible to write about. And even to live through." But by sharing her story, she has helped people who weren't there understand what was lost in Chernobyl.