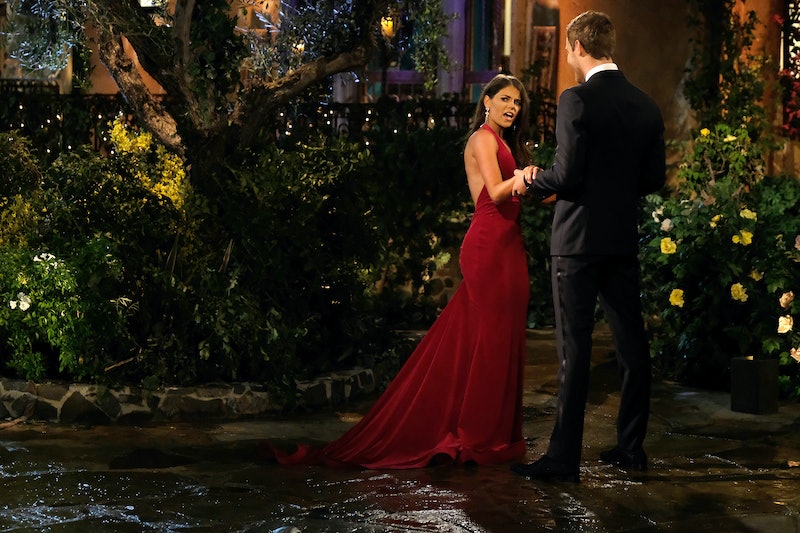 Peter seemed to have had the strongest connection with Madison throughout his Bachelor season, but Madison's fantasy suite date may have marked the end of their relationship. Madison has struggled all season to tell Peter that she's abstaining from sex before marriage, and though she did mange to express it to him eventually, she also so that she'd find it "hard to move forward" if he slept with Hannah Ann or Victoria F. (to which he admitted he'd been intimate). It was a tough spot to be in: Though Madison said she didn't want to give Peter an ultimatum or tell him what he can or cannot do, she was, at the same time, doing just that.

"I'm torn because of what I expect and what I need, versus what I feel for you," she told Peter after walking away from their dinner. "I don't want to walk away." Ultimately, though, she did walk away — although it's unclear whether she's leaving the show or if she and Peter will manage to work through this.

While Madison's breaking point occurred during the dinner portion of their date, the cracks in the foundation of her relationship with Peter began long before, during their date in Chile. Madison told him how important her faith was to her, and while Peter respected it, he clearly had a much different relationship with his own religion, which means that — bottom line — they may just have different values.

At this point, Peter isn't even sure they're on the same page feelings-wise. "Madi means so much to me, but I definitely was thrown a curveball right now," he told the cameras, adding that while Hannah Ann and Victoria admitted they were falling in love with him, "With Madison, I haven't heard that. It's definitely frustrating because I need to feel like she's on that same level that I'm at." (For the record, Madison did later admit to being in love with Peter.)

It's unclear where things will go from here — after all, there is a very popular theory among Bachelor Nation that suggests Madison quits The Bachelor, and that Peter then chases after her, a la Colton and Cassie. Whether or not that comes to fruition all depends on whether or not Madison decides to show up to the rose ceremony next week — which, if the promos are to be believed, she does not.