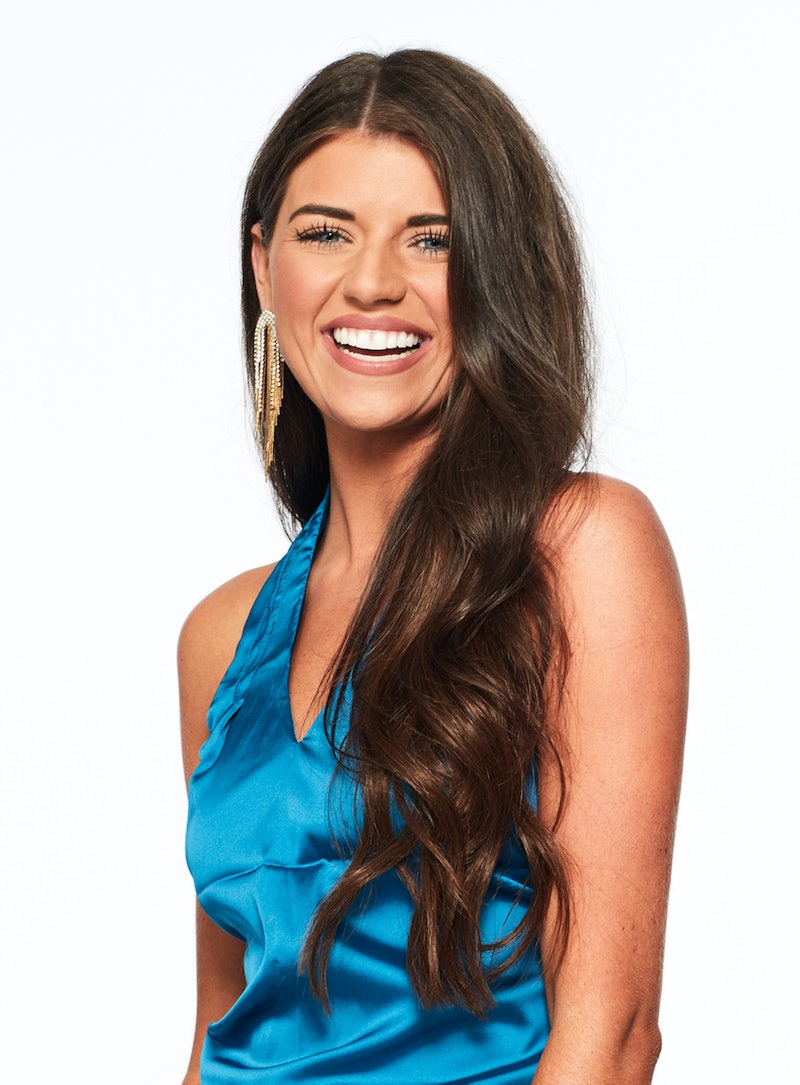 This season of The Bachelor has been a wild ride. Between the contestants' drama and Peter Weber's insistence that the show won't be spoiled, it may actually be the most dramatic season ever. While the answer to who wins Weber's heart is still up in the air (pun, intended), Madison's looks from The Bachelor were the real winner of the show.

Madison, one of the top two contestants from Weber's season, has been a front-runner since he brought her home to help officiate his parents' vow renewal in the beginning. For that occasion, she donned a fitted, midi-length fuchsia sheath dress that immediately captured the attention of viewers. Ever since, the Alabama native has been wowing fans with her sparkling and vibrant style.

From her impressive collection of jumpsuits to her beaded, halter mini dress and door knocker earrings, Madison's Bachelor style was the highlight of the season. With her journey coming to an end in ABC's two-night finale airing Mar. 9 and 10, it's only fitting to look back at the finalist's ensembles leading up to the final rose ceremony.

From sneakers and denim to beaded mini dresses, even if Madison doesn't receive the final rose, she definitely deserves accolades for her winning looks.

On night one, Madison was one of several women who opted to wear red (like a rose, get it?). However, her velvet, halter neck gown with a plunging neckline and fitted silhouette was certainly a standout.

For their first one-on-one, Peter took Madison to his parents' vow renewal where she chose a fitted, bright fuchsia midi length dress with a one-shoulder design and ruching at the waist.

For the evening portion, Madison changed into one of her signature jumpsuits. This crimson hued piece featured an off-the-shoulder neckline, gathering at the bust, and a trouser-style pant leg.

While she already had a rose, Madison still got one-on-one time at the second rose ceremony where she wore a hot pink mini dress with romantic off-the-shoulder sleeves and dangling statement earrings.

During a pool party with Peter and the other women, Madison opted for a minimalist, red two-piece and a white sarong tied around her waist.

Madison's next meeting with Peter was in Cleveland where they went to train with the Browns on a group date. For this athletic event, the contestant went with navy leggings, a charcoal gray crop top, and white sneakers.

For the rose ceremony in Cleveland, Madison opted for another colorful jumpsuit. This time, she picked a strapless hot pink piece with a ruffle detailed top that wrapped around to the back of the design. Cleveland was also the first city where fans saw the frontrunner rock the geometric earrings she and the rest of the women wore on repeat during filming.

For a photoshoot date in Costa Rica, the women were able to pick out their own bikinis, and Madison chose a cheetah print patterned two-piece with a bandeau top and high rise bottom.

The jumpsuits just kept coming in Costa Rica as well. For this week, Madison's look was a bold red one-piece with spaghetti straps and an open and dramatic strappy back.

During the day portion of the Chilean group date, Madison and the other women had to star in a telenovela. For the occasion, she wore a '90s-inspired snake skin, spaghetti strap top paired with a simple pair of black skinny jeans.

During the evening, Madison changed out of her casual denim and into a chic black lace jumpsuit.

Madison was already the proud owner of a rose during this ceremony, but her look was serving serious wedding vibes with its tea length and shimmering cream fabric.

Madison went ultra casual for her daytime one-on-one date with Peter in Peru. Her tie-strip ruffle red top, light wash distressed skinny jeans, and white trainers look was one of her most casual outfits of the season.

While she has a plethora of clothing options, it seems the contestant may have rocked a re-wear while in the South American country. Her red jumpsuit with spaghetti straps looks identical to the one she wore at the Costa Rica rose ceremony.

Madison had two outfits during her hometown date with Peter, but up first was a ruffled, lace crop top and dark skinny jeans paired with sneakers.

Later in their date, the couple hit the court at the Auburn basketball arena where she slipped on an official jersey for the college team.

Madison's glittering Rachel Allen jumpsuit was one of the most-talked-about looks of the season, and it's not hard to see why.

In one of more awkward moments, the final three women were forced to stay together during overnight dates, but fans did get to see more of Madison's casual style as a result. Upon entering her suite, the contestant donned a gray leopard print top, black jeans, and black wedges.

Following Hannah Ann's return from her overnight date, all the women gathered in their suite to chat and Madison donned a white racerback tank top and distressed denim shorts.

Just before she was picked up for her own date, she chose to rock a silk tie-strap top with a cinched waist, black jeans, and wedges.

Finally, it was Madison's turn for an overnight date. For the day portion, she wore the same white Nike sneakers fans saw during her hometown date, but paired them with white denim shorts and a cropped peasant style top with a ruched waist.

Madison's final look before the show's season finale was a red spaghetti strap mini dress that featured a ruffle neckline.

More like this
Harry Styles’ Red Carpet Looks Have One Thing In Common
By El Hunt
Ruffles, Velvet, Puff Sleeves, And More Plus-size Trends At The 2022 Emmys
By Dominique Norman
All The Great Looks From The Bloomingdale's 150 x Bazaar Icons Party
By Allie Fasanella
I Can’t Stop Thinking About Emily Ratajkowski's Exposed Thong Look
By Allie Fasanella
Get Even More From Bustle — Sign Up For The Newsletter