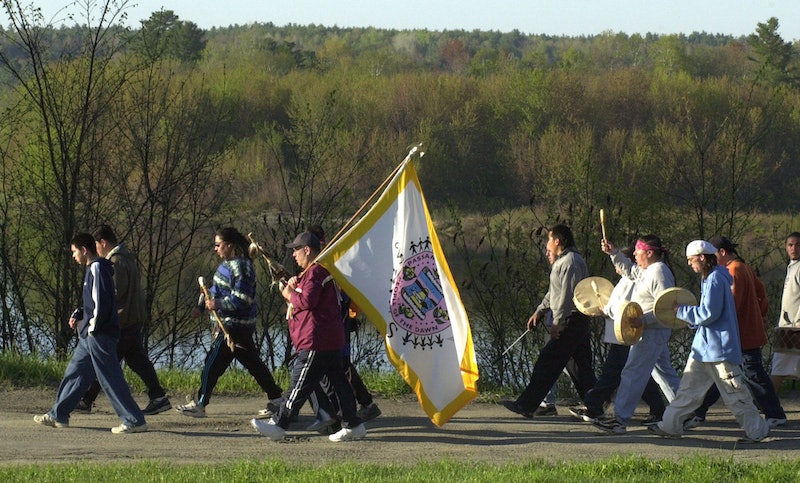 If Maine Gov. Janet Mills signs a recent bill passed by both the state House and Senate — as she is expected to do — Maine will replace Columbus Day with Indigenous Peoples' Day, per The Hill. On Thursday, the Maine state Senate voted 19 to 14 to pass the bill to rename the federal holiday in honor of Native American and indigenous people.

Earlier this year, Democratic state Rep. Benjamin Collings sponsored legislation to rename the holiday Indigenous Peoples' Day, in order to do away with celebrations of Christopher Columbus. By the time Collings introduced the legislation in February, a few communities in Maine — including Bangor and Portland — had already adopted Indigenous Peoples' Day, CBS Boston reported. Last month, Maine's state House voted 88 to 51 to pass the bill, and with the Senate's approval this week, it is on its way to Mills' desk. The governor has previously said that she intends to sign the bill into law, per The Hill.

Before the House and Senate voted to move the bill forward, state Rep. Rachel Talbot-Ross read a statement by Maulian Dana, tribal ambassador for Penobscot Nation, on the House floor. In the statement, Dana called on Maine lawmakers to officially adopt Indigenous Peoples' Day, arguing that Columbus was a "war criminal" who did not deserve a celebration, despite "making an important impact on history."

“Columbus ... is the symbolic genesis of the idea that indigenous people of the Americas were a savage and inferior race that should be exterminated in order for progress and colonization," Talbot-Ross read.

Oami Amarasingham, the policy director for the ACLU's Maine branch, applauded the Senate for voting to pass the bill.

"It’s time to stop celebrating a man whose arrival brought death, disease and slavery to hundreds of thousands, and start honoring the people who lived here long before," Amarasingham told the Bangor Daily News.

Columbus Day is still a federal holiday, but if Mills signs the bill into law, Maine would become the eighth state to replace Columbus Day with Indigenous Peoples' Day on the state level. Earlier this month, New Mexico passed similar legislation to scrap Columbus Day, per CBS News, and over the years, Alaska, Hawaii, Minnesota,︎ Oregon,︎ South Dakota, and Vermont have all called for the adoption of Indigenous Peoples' Day. In fact, Vermont is also on the verge of renaming Columbus Day; its governor, Phil Scott, said Thursday that he is likely to sign this change into law.

Maine lawmakers' effort to officially adopt Indigenous Peoples' Day is the latest step the state has taken to honor Native American and indigenous communities. Earlier this month, the Bangor Daily News reported that a bill to ban the use of Native American mascots in Maine's public schools won approval from a divided Education and Cultural Affairs Committee. This bill — which was also introduced by Collings — would eliminate the use of Native American mascots after years of debate and protest, per the Bangor Daily News.