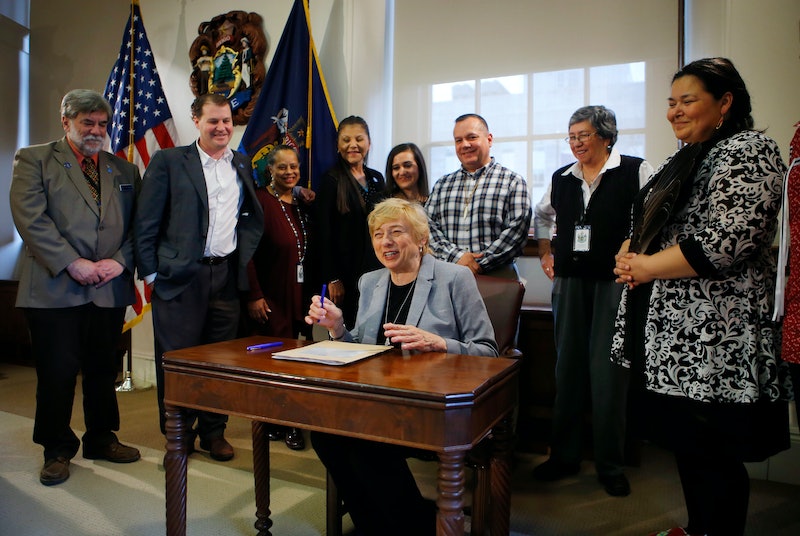 "Our history is by no means perfect," Gov. Janet Mills said in a statement released by her office late last week. "But, for too long, it has been written and presented in a way that fails to acknowledge our shortcomings."

Legislation entitled An Act To Change the Name of Columbus Day to Indigenous Peoples' Day had passed through the state's legislature earlier in the year with hefty bipartisan support. In signing the legislation Friday, Mills said "there is power in a name and in who we choose to honor." The governor went on to characterize the holiday turnover as an effort to promote healing. "Today, we take another step in healing the divisions of the past, in fostering inclusiveness, in telling a fuller, deeper history, and in bringing the State and Maine's tribal communities together to build a future shaped by mutual trust and respect," she said.

While hundreds of cities and towns across the country have opted to officially replace Columbus Day with Indigenous Peoples' Day, Maine is only the eighth state to make the change, according to Mills' office.

But the switch from Columbus Day to Indigenous Peoples' Day reportedly wasn't made easy. According to CBS News, similar legislation failed to pass the state's legislature twice before. In fact, Penobscot Nation Tribal Ambassador Maulian Dana told CBS affiliate WGME that she didn't think the latest bill would pass. "I honestly didn't see it happening," WGME reported Dana said. "It's hard in a state like Maine where we do have a lot of racial tensions, we do have a lot of misunderstandings and a lot of gaps between groups, I think."

In a statement released by Gov. Mills' office, Dana said the state's move from Columbus Day to Indigenous Peoples' Day "shows true intent to honor" Maine's Indigenous Nations and would bring all citizens to an elevated understanding and reconciliation of our shared history." She thanked those whose continued efforts eventually brought discussions regarding the controversial nature of Columbus Day to the ears' of Maine lawmakers.

"As the original stewards of these lands and waters we are happy that our ancestral ties and contributions are validated and celebrated instead of silenced and ignored by the previous holiday that glorified the attempted genocide of our Nations," Dana said in a statement, adding that the legislation reflects a "more welcoming and inclusive" Maine. "Our past can be painful but our present and future can be brighter with acts of unity and honesty."

Activists and critics of Columbus have long argued that celebrating the Italian explorer disregarded his role in the violent history of colonization, specifically as it relates to Indigenous People in North America.

Maine is expected to celebrate its first official Indigenous Peoples' Day later this year on October 14. Recently, lawmakers in the state's House have also moved to bar public schools in the state from using Native American insignia as mascots or logos.