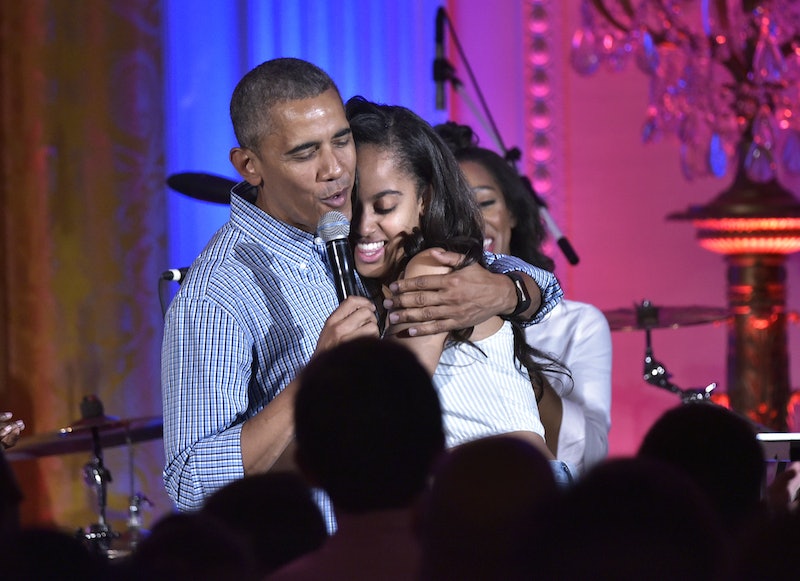 In one of the most emotional moments of President Barack Obama's farewell address, the camera cut to Malia Obama crying during her dad's speech, causing dozens of Twitter users and viewers at home to cry along with her. The emotional moment was caught on multiple live feeds of the highly-anticipated address, and will likely go down in history as one of the most poignant moments at the end of Obama's history-making presidency.

This touching moment came as Obama delivered one of his now-customary references to his beloved wife Michelle — and as the camera cut to his wife and daughter, audiences were treated to a shot of a stoic and smiling Michelle alongside a quietly crying Malia. Said Obama:

..that faith I placed all those years ago, not far from here, in the power of ordinary Americans to bring about change – that faith has been rewarded in ways I couldn't possibly have imagined. I hope yours has, too. Some of you here tonight or watching at home were there with us in 2004, in 2008, in 2012 – and maybe you still can't believe we pulled this whole thing off.

You're not the only ones. Michelle ... for the past twenty-five years, you've been not only my wife and mother of my children, but my best friend. You took on a role you didn't ask for and made it your own with grace and grit and style and good humor. You made the White House a place that belongs to everybody. And the new generation sets its sights higher because it has you as a role model. So you have made me proud. And you have made the country proud.

The moment clearly touched the hearts of people watching at home, with some hyperbolically joking that those who aren't crying with the eldest Obama daughter should go see a doctor.

Malia Struggling To Hold Back The Tears

Somebody give the cameraperson who captured those shots a medal of honor, quick.

Sharing A Sweet Moment With Michelle

Crying with her mother by her side, Malia and Michelle cut a striking figure of the beloved first family that will soon vacate the East Wing.

Malia Wasn't The Only One Crying

And in that moment, we were all Malia Obama.

There wasn't a dry eye in the house, or on Twitter for that matter.

There's no surprise that both the Obama family and the millions of Americans who helped put them in the White House were emotional during the president's final address. Many of us have been there from the beginning — some since before we were old enough to vote. Seeing the young woman who, as a girl, sat in a crowd in Chicago in 2008 and watch her father claim victory as the first Black president of the United States hold back tears on live television is symbolic of how much America has grown since that fateful night eight years ago. We will soon have a new president and a new first family, but I doubt there will come a time that those of us who cried with Malia tonight won't look back fondly at the Obamas.