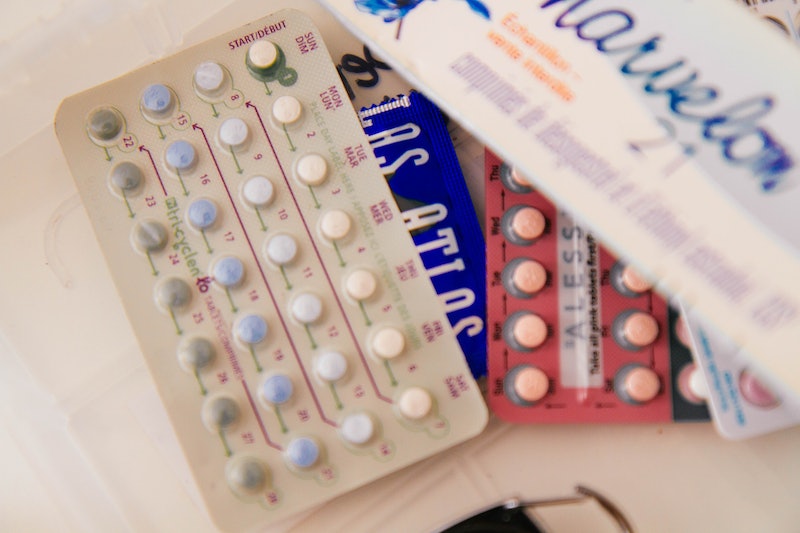 Courtesy of The Unmentionables

It’s World Contraception Day and now, more than ever, it's men who need to take notice. As the confirmation vote of Supreme Court nominee Brett Kavanaugh nears, it's worth remembering that he uttered the words "birth control" and "abortion-inducing" in the same sentence (though the jury’s still out on whether he meant it or was quoting someone else). This recent comment joins dozens of similar misconceptions about birth control — and female reproductivity — men in power have spread.

Six years ago, American radio host Rush Limbaugh suggested that women who wanted access to subsidized or insurance-covered birth control were ... promiscuous. Around the same time, Missouri state senate nominee Todd Akin was under the impression that the female body would biologically "block" an egg from being fertilized through non-consensual sex. Essentially, he suggested that the body knew if it had experienced "legitimate rape" and the need for an abortion would be unnecessary — because the body would have sorted it itself. And just days after Kavanaugh's comment, the president of Tanzania suggested that birth control was for "lazy" people, a year after declaring that pregnant girls could no longer attend school.

Men around the world haven’t received the education they need on contraception. Young men consistently score far lower on knowledge questionnaires about birth control than their female counterparts, according to the Guttmacher Institute, and less than half report receiving information on how to access contraceptives, a study published in the Journal of Adolescent Health found.

Informed men are better for women: When they know more about birth control, unintended pregnancies decrease. Plus, they are able to be more active in family planning, sharing the responsibility with women.

I've seen this for myself. My work with The Unmentionables takes me to Greece and Uganda to train forcibly displaced men and women in sexual health. In both countries, I have been met with vast misunderstandings of contraception from both men and women. One male doctor told me that The Pill would make a woman’s stomach turn green, while several other men had never seen or heard of a condom. In many of the countries that these men come from, access to contraceptive education — let alone access to contraceptives at all — is limited. In this instance, and in my experience, once these men have access to the information, they listen and ask questions. And then they participate in the conversation.

My husband, who is a British-educated, intelligent man, just proved this to me.

So what concerns me most is the hushed agreement that men don’t need to be part of the contraceptives conversation that clearly transcends borders. Because birth control is often seen as a woman’s issue, men haven’t had to engage. But look at where that’s got us: Birth control is so misunderstood by half of the baby-making equation that untruths about family planning dominate the news.

My husband, who is a British-educated, intelligent man, just proved this to me. I asked him about his own knowledge, and he admitted he only knew of The Pill and the IUS (intrauterine system — known as an IUD in the United States). He also knows about the ring, seeing as mine sit in the fridge next to our milk, but he lacked confidence when I pushed him further. When I asked him where the IUS went, he confused it with the implant. While they are both hormonal methods of birth control, one goes in the arm and the other, the cervix. Ironically, I’ve made my whole life about contraceptive and reproductive rights education and yet I have not ever really discussed birth control options with my own husband — with whom I have no children. On purpose.

The problem is not just that men have suggested these things publicly, it is that they believe them privately.

On one level, I am overjoyed that two men stood up this month and made entirely incorrect statements about contraception, because it has drawn attention to the knowledge crises that exist within sexual health education and engagement. On the other, I am frustrated that this is the 11th time World Contraception Day has been on the international calendar, and this is where we’re at. I don’t claim to know everything, but I do know about contraceptives, and others should, too. The decision to have a child or not is huge and in every case of fertilization, two people need to be involved.

Birth control does not induce abortions. It does not inherently make women lazy or promiscuous. Our bodies don’t care whether we’re financially or emotionally prepared to parent, and they don’t know under what circumstances they became pregnant or impregnated. The problem is not just that men have suggested these things publicly, it is that they believe them privately. All that can be done about this is a greater commitment to contraceptive education and engaging men in one of the most important conversations they’ll have.

On this World Contraception Day, I urge anyone whose body creates eggs or sperm and doesn’t want to have a child (yet or ever) to seek out information and challenge those who refuse to do so. Because by the time I do have children — which, if my NuvaRing serves me right, isn’t soon — I don’t want them exposed to this nonsense.

Genevieve Westrope is the managing director of The Unmentionables, a non-profit organization that provides forcibly displaced individuals and communities around the world with safe and consistent access to sexual and reproductive health education, services, protection, and empowerment programs.