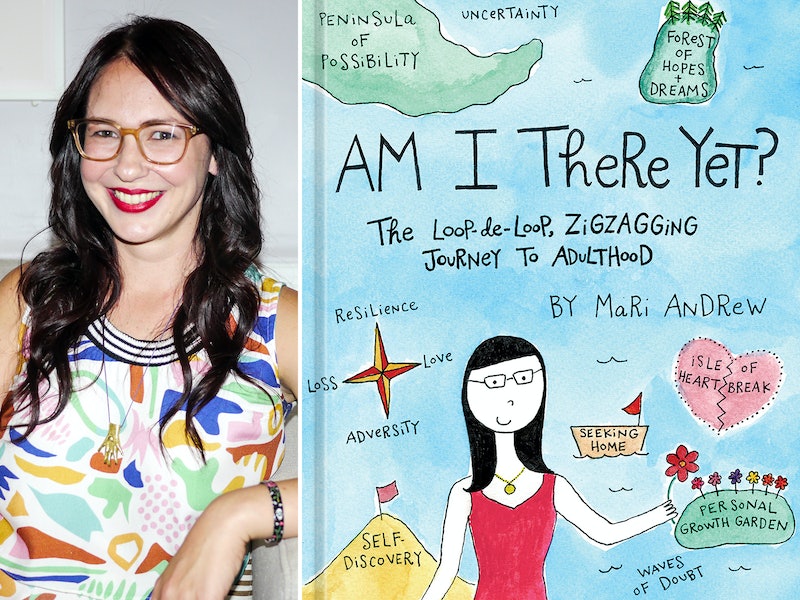 In her debut graphic memoir Am I There Yet?, out now, Mari Andrew traces her winding path to adulthood through a series first person essays peppered with tiny revelations about life, heartbreaks, and travel. Her words sit side-by-side with heartfelt illustrations, including drawers of Andrews herself. (She appears with dark hair and wide eyes.) Throughout the book, she draws and writes about the experiences — good and bad — that have shaped her life, including the death of her father and her struggles with Guillain-Barré Syndrome, an illness that left her briefly paralyzed while on a trip to Spain. But she also peppers the bitter with the sweet, sand offers up reflections on tiny, Amelie-like pleasures, such as buying a new coat and or walking down the street of a new city.

The relatable, slice-of-life adventures began as an extension Andrew’s extremely popular Instagram. The artist-turned-author originally joined the app as a way to keep herself accountable during a doodle-a-day challenge. But as her drawings grew from observations about fall-friendly beverages and favorite cities to stories of about grief, happiness, and attempting to date as a 20-something in the big city, so did her audience. Now with over 700,000 followers to her name, Andrew has transformed her drawing from passion project into full-time career.

“It’s still a passion project, but one that gives me money, which is amazing,” Andrew tells Bustle, calling from her home in New York city where she recently relocated. “That’s the dream, right? It’s really great when you see creative work being valued by anyone—publishers, corporations, anybody. It’s a rare story.”

Perhaps rare isn’t a strong enough word. Now 30, Andrew didn’t being illustrating until she was 28 years old, when she began drawing as a way of challenging herself to find happiness after the passing of her father. She dreamed of finding job security in a creative career, but she never imagined that her audience would identify so readily to her honest observations about awkward moments (like an early cartoon where she decides how long she has to stay in a store if she’s not going to buy anything), love, and staying creatively open with internet trolls hovering over her shoulder. Just having a place to express herself felt like enough.

“There wasn’t a lot of pressure and it wasn’t hard for me to be vulnerable about things that happened to me,” she says. “I would be very honest about dates, jobs, interviews, whatever. I think that’s when they started resonating with other people. The more specific and honest I was about my own experiences, the more universal they seemed to other people. I got a couple hundred followers I didn’t know, and I realized ‘Oh! Somebody’s getting this.’”

Slowly the dream of working as a full-time artist and writing grew together. Even though she had written many of Am I There Yet?’s stories, it wasn’t until her Instagram account snowballed that she realized art might be her "in" to the publishing world. Suddenly Andrew was a professional artist.

“Getting the book deal was the first time I had gotten paid for anything,” she says. “I sold prints on commission for $10. I wouldn’t call that getting paid, even though it seemed really amazing at the time that people were willing to spend money. But after I got the book advance, I wondered if there were other ways that maybe I could start making money through art since I was actually getting people interested in paying me.”

Although Andrew’s story, moving from amateur to author in two years, seems improbable, she doesn’t see her case as particularly special.

“If you have impulse to say something or share, if you have that burning desire to express, it’s probably for a reason,” she says. “It probably haves an unusual perspective that’s needed in the world. What’s marketable is a pretty watered-down version of that. A generic voice that’s easily accessible clickbait. That’s what we prize in the creative landscape. Whenever I’ve tried to be a generic voice, it’s terrible. I’ve been rejected every time. When I’m my most authentic self, that’s when people take note.”