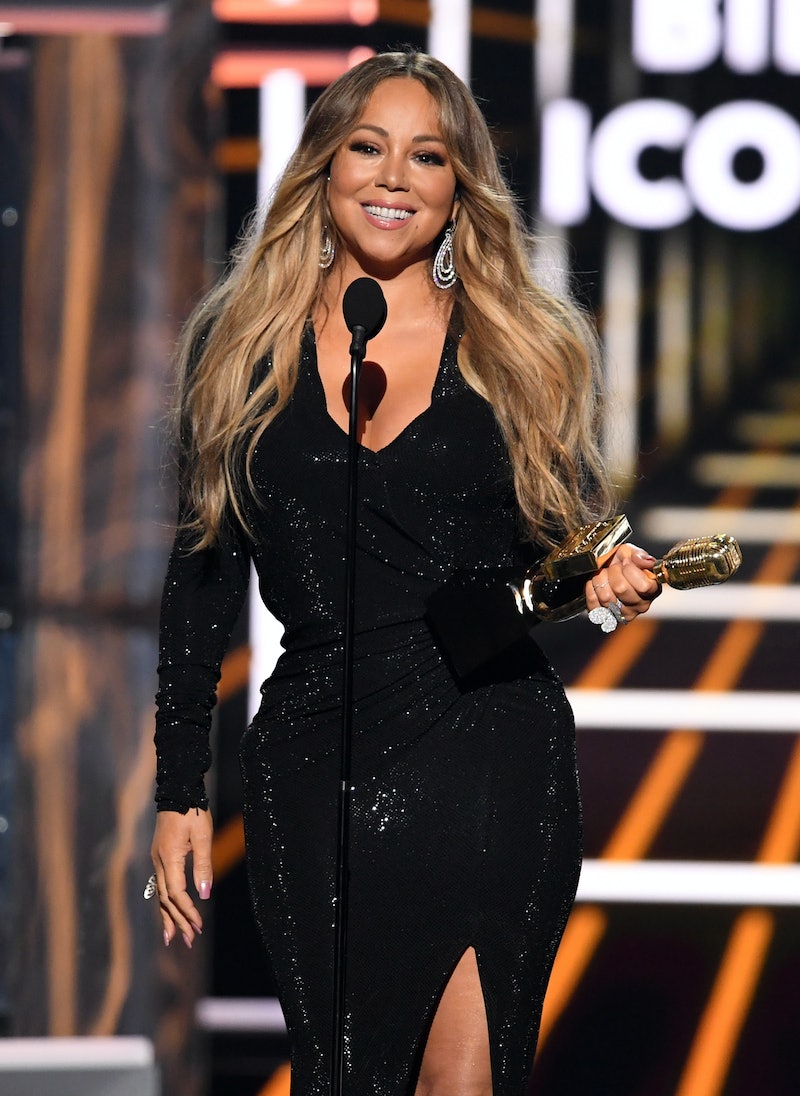 While receiving the Icon Award on Wednesday night, Mariah Carey gave a 2019 Billboard Music Awards speech offering hope to others who, like herself, have felt like an outsider. It was an inspiring, emotional moment that had Twitter in tears. And it followed an amazing performance during which Carey performed a myriad of her greatest hits including "We Belong Together" and "Hero." It was truly a powerful few minutes of television.

True to her diva self, Carey pulled out all the stops for the BBMAs and even had her 8-year-old twins, Moroccan and Monroe aka "dem babies," in the audience adorably cheering her on as she performed. The moment was obviously a celebratory one for both the singer and her loving "Lambily" fanbase. But things later turned a bit more serious as Carey addressed the crowd with a touching speech that provided both insight and inspiration on how to get through some of the more difficult times in life.

After gloriously tossing the tissue she used to wipe away her sweat into the crowd, Carey first gave her twins a shoutout, pointing out that it was recently their birthday. She then addressed the importance of receiving the night's Icon Award and shed light on her journey to stardom, explaining:

"Icon — I really don't think of myself in that way. I started making music out of a necessity to survive and express myself and I just wanted to create something so I could feel worthy of existing."

Adding a bit of comedic relief to her speech, Carey poked fun at herself a bit and went on to joke, "Without getting into all the drama, all the ups and downs of my career. We've all seen them we all make mistakes. Uhm, there's been a few memes."

The speech was quite a departure from the singer's reputation of being a fabulous diva, which has become a large reason behind why fans love her so much. The moment allowed viewers to see a much softer, vulnerable side of her that she doesn't often show off. During the speech, Carey went deep into how she learned to survive in this world:

"I guess I've alway felt like an outsider, someone who doesn't quite belong anywhere. And I still feel like that little interracial child who had a lot of nerve to believe I could succeed at anything at all in this world. But I did believe, because I had to."

Closing with a thank you to her adoring fanbase, she added,

"To anybody who doesn't allow themselves to be broken, and keeps up getting up, and keeps holding on, and keeps standing tall, and keeps on believing, and keeps rising, I celebrate you tonight. And to anyone who's ever told me that a song I wrote helped save your life, I thank you, because you saved mine. And I'll be eternally grateful for that. Thank you, I love you so much."

With a nearly three decade career under her belt, there's certainly no one more deserving of being pegged an icon than Mariah Carey, and her latest speech proves that her influence goes far beyond her work in music.

More like this
Dan Levy Appears In The Latest Teaser For The Weeknd's HBO Series, 'The Idol'
By Jake Viswanath
Everything To Know About Taylor Swift’s 10th Studio Album, 'Midnights'
By Grace Wehniainen and Jake Viswanath
Is Dua Lipa Dating Trevor Noah? New Photos Show Them Kissing & Hugging
By Brian Anthony Hernandez and Martha Sorren
Twitter Is Freaking Out Over Rihanna’s 2023 Super Bowl Halftime Show Announcement
By Stephanie Topacio Long
Get Even More From Bustle — Sign Up For The Newsletter