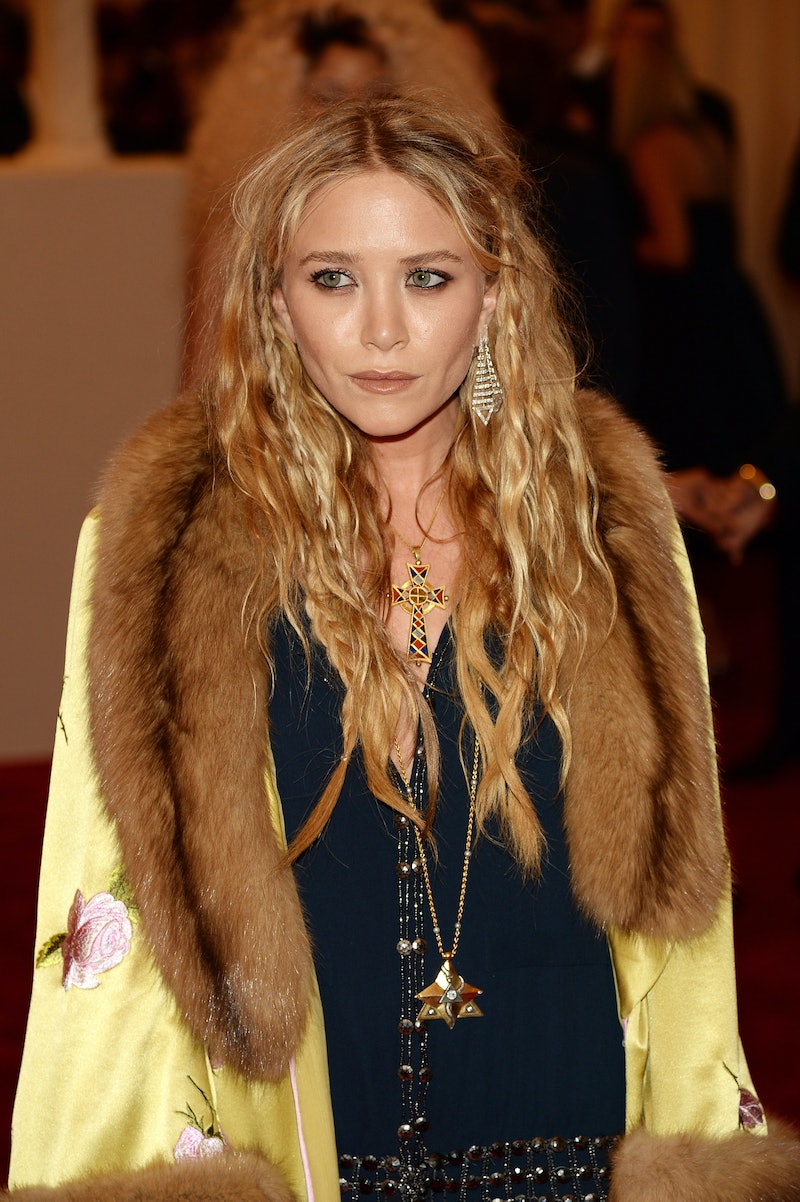 It isn't often that Mary-Kate Olsen is spotted in public, but recently, she got out to participate in one of her favorite hobbies. Late last week, Olsen competed at an equestrian event in Madrid, Spain, as husband Olivier Sarkozy cheered her on, and so many photos have surfaced of the couple at the event already, as well as photos of Olsen riding her horses in the competition.

The competition was held at Madrid-Longines Champions at the International Global Champions Tour at the Club de Campo Villa, and according to Page Six, Olsen rode horses Fatum and Naomi. Although she was disqualified in her race with Fatum because of an "error of course," Olsen and Naomi placed sixth in her class. Not too shabby.

On her HITS rider profile, Olsen said she fell in love with horses at 6 years old on the set of To Grandmother's House We Go, when she met a pony named 4x4. She competed on the equestrian team in high school, but had to take a break from riding while she attended college at NYU. Now, she rides whenever she gets the chance.

"[Riding] allows me to practice being accepting, patient, disciplined, compassionate, competitive, and all of those other emotions that are very important to have in your everyday life,” Olsen said in her profile. “Horses teach you a lot about yourself.”

It does seem like Olsen takes riding very seriously, especially in the photos from the event that were captured of her riding the horses and during the competition — and her focus definitely paid off, since she and Naomi placed.

If seeing Olsen on a horse in 2019 is giving you Full House flashbacks, you're not the only one. Who could forget Michelle Tanner's love of horses on Full House? And more importantly than that, who could forget that in the show's series finale, Michelle fell off a horse, getting amnesia, and incidentally giving both Mary-Kate and Ashley the chance to be on camera together? It was the absolute height of television drama at the time, after all.

The state of Michelle's memory was a bit touch and go for awhile there — not even a serenade from Danny, Joey, and Uncle Jesse could bring it back at first — but eventually, it did return. Michelle made a full recovery, and Olsen grew up to ride again.

Despite the fact that Olsen works as a fashion designer by day, she still finds time to ride competitively. In fact, last September Olsen and Fatum competed in the American Gold Cup jumping competition, so it seems like she's able to do what she loves pretty regularly.

It's good to see that Olsen is finding the time to pursue her passions outside of work, and that this competition ended a lot better for her than the way Michelle Tanner's riding career turned out. There have been plenty of Fuller House episodes since then, but real fans will never forget. Wear a helmet out there, everyone.