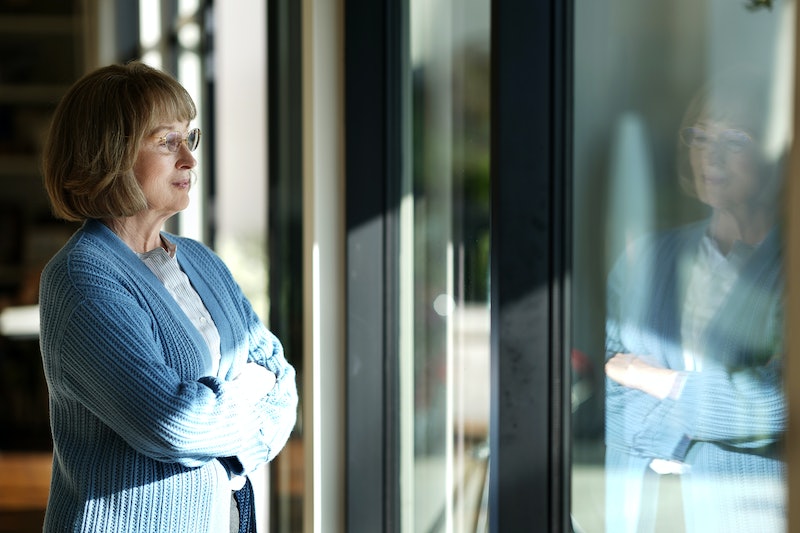 Spoilers ahead for Episode 3 of Big Little Lies Season 2. Last week on Big Little Lies, Celeste revealed to Mary Louise that Perry physically assaulted her throughout their marriage, raped Jane and fathered Ziggy, and was overall not the perfect, adoring man Mary Louise believed he was. In the June 23 episode, we see Mary Louise attempt to — and largely fail — to grapple with this. In her words, she can't just "surrender to the notion that he was evil." Perry was her son, after all. She loved him. She nurtured him. How could he be capable of such awful and violent things?

As Mary Louise tries to reconcile her perception of Perry with the man he was in reality, she makes many missteps. First, she asks Ziggy to submit to a paternity test. Jane refuses without hesitation, explaining Perry is the only man she's been with, but Mary Louise dismissively snaps, "That you remember." She then suggests Jane somehow provoked Perry to assault her, or that he perhaps misread the signs, given the nature of he and Celeste's sex life. "I know how devoted he was to Celeste," she tells Jane over coffee. "And I just can't conceive how he — unless he was tempted, as men can be in a moment of weakness. Did you initiate, Jane?"

Later, she applies the same skepticism to Celeste. After rummaging through her daughter-in-law's drawers, reading the labels on prescription bottles, she tells Celeste disapprovingly that she has "quite an impressive array" of medicine, specifically noting the Vicodin. She doesn't say it directly, but the subtext is clear: if Celeste has been abusing drugs, then how could she be a reliable witness for Perry's behavior?

Essentially, Mary Louise does everything she can think of to explain away, re-direct, and minimize Perry's behavior. In these conversations, she is the embodiment of victim-blaming. Every aspect of her phrasing is designed to absolve Perry — and by extension, any man in his position — from blame. If the woman "initiated" any kind of encounter or somehow "tempted" the man in question, she's to blame for whatever comes after. Boys will be boys, and if those boys go on to assault or abuse someone — well, the woman shouldn't have put herself in that position.

We've seen this type of reaction play out many times in recent years. As the #MeToo movement has continued to reverberate through Hollywood, there have been just as many people dismissing victims as there have been uplifting them. Since then, men like Perry, the women they hurt, and the damaging ways society often responds to them has been examined numerous times on television. But Big Little Lies offers a glimpse into a messier, even more complicated side of it: what do you do when someone you know and care about is the accused? Can you still love them and also acknowledge the harm they've inflicted on others? If you do still love them, what does that say about you?

Big Little Lies doesn't suggest that Mary Louise is right to question Jane and Celeste like this, but it does honor the grief and confusion she's inevitably experiencing. It includes the ugliness of her denial, but it also features sympathetic moments in which she drops her armor and admits how lost and pained she feels. "I'm presented with the idea that my son was both an adulterer and a rapist," she tells Jane. "And I am desperate to squash that idea."

We don't need to have sympathy for the problematic questioning that follows, but we can have sympathy for what Mary Louise is going through. In the wake of #MeToo, we've (rightfully) focused on supporting victims of assault and their families, but it's important to note that abusers hurt everyone around them. In showing Mary Louise's struggle to accept who her son was, Big Little Lies doesn't detract from the idea that you should always believe accusers. It just makes room for understanding that doing so isn't always easy.

More like this
Pamela Anderson's Sons Brandon & Dylan Have Their Own Hollywood Careers
By Arya Roshanian
Ashton Kutcher Wants Danny Masterson “To Be Found Innocent” In Rape Retrial
By Jake Viswanath
Linda Ronstadt’s “Long Long Time” Plays A Pivotal Role In The Last Of Us
By Brad Witter
'The Queen’s Gambit' Season 2 Tweet Wasn’t From Anya Taylor-Joy
By Mary Kate McGrath, Jack Irvin and Grace Wehniainen
Get Even More From Bustle — Sign Up For The Newsletter
From hair trends to relationship advice, our daily newsletter has everything you need to sound like a person who’s on TikTok, even if you aren’t.