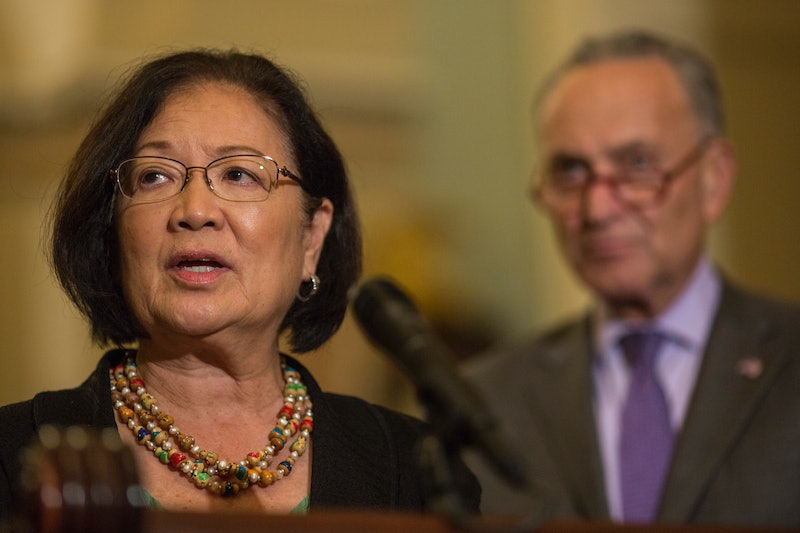 With confirmation hearings on the latest SCOTUS pick underway, Democratic senators are taking the opportunity to pinpoint the nominee's constitutional interpretation. On Wednesday afternoon, Hawaii's Sen. Mazie Hirono asked Brett Kavanaugh if he believes immigrants, regardless of legal status, have a constitutional right to an abortion. His response was short, and didn't give up much.

"Do you think that that is an open question as to whether or not alien minors, or in fact aliens in our country, have... a constitutional right to an abortion?" Hirono asked.

"The Supreme Court has recognized that persons in the United States have constitutional rights," Kavanaugh replied. Hirono waited several seconds in the silence that followed for him to continue his thought, but Kavanaugh was done with his answer.

The case Hirono was referencing is Garza v. Hargan, in which a 17-year-old migrant in Texas attempted to obtain an abortion, but was prevented from doing so by the Trump administration. She did eventually receive one, a little over a month after she was first denied. The ACLU is currently suing the administration for initially withholding her right to the procedure. Garza is the only abortion case which Kavanaugh, a D.C. circuit judge, has evaluated. His dissent in the case expressed an opinion that the immigrant's abortion should have been delayed further, approaching the 20-week cutoff mandated by Texas law.

According to court documents, because she was a minor, and had entered the country illegally and unaccompanied by her parents, she obtained a judicial bypass from a Texas court. The bypass served as a stand-in for the parental consent normally required to obtain an abortion under the age of 18. Even so, the federal government stepped in and instead of granting the abortion, continued to hold her in custody while it looked for an immigration sponsor for her.

"The government is arguing that placing her with an immigration sponsor would allow her, if she wished, to consult with someone about the decision," Kavanaugh told Sen. Dick Durbin earlier in the hearing. "That is not the purpose of the state bypass procedure."

In his dissent, Kavanaugh wrote that the constitutional principle of his circuit court colleagues' decision was "as novel as it is wrong." He argued that granting undocumented minors the right to an abortion delays the government in quickly placing them with sponsors, and would even "impose an undue burden" on the abortion right, presumably because the minor would not have a sponsor with which to discuss their decision.

When Kavanaugh reiterated his reasoning at Wednesday's hearing, emphasizing that the woman was both underage and alone, Hirono pushed back, arguing that she didn't need parental consent — or a sponsor, for that matter. She had already obtained the judicial waiver. "There is no issue of parental consent," she said. "That's not even an issue."

Continuing in the theme of the last two days of hearings, Kavanaugh repeatedly remarked to Hirono that his decision in Garza was based on precedent. "I made clear that I was following as carefully as I could, the precedent." Speaking about the case earlier, in his interview with Durbin, Kavanaugh referenced Planned Parenthood v. Casey as precedent, because it supported a parental consent requirement for abortion.

Both Kavanaugh's opinion in Garza and his statements on the matter during the hearing left senators without a clear answer about his beliefs on immigrants' abortion rights. Maybe the upcoming hearings can provide some clarity.