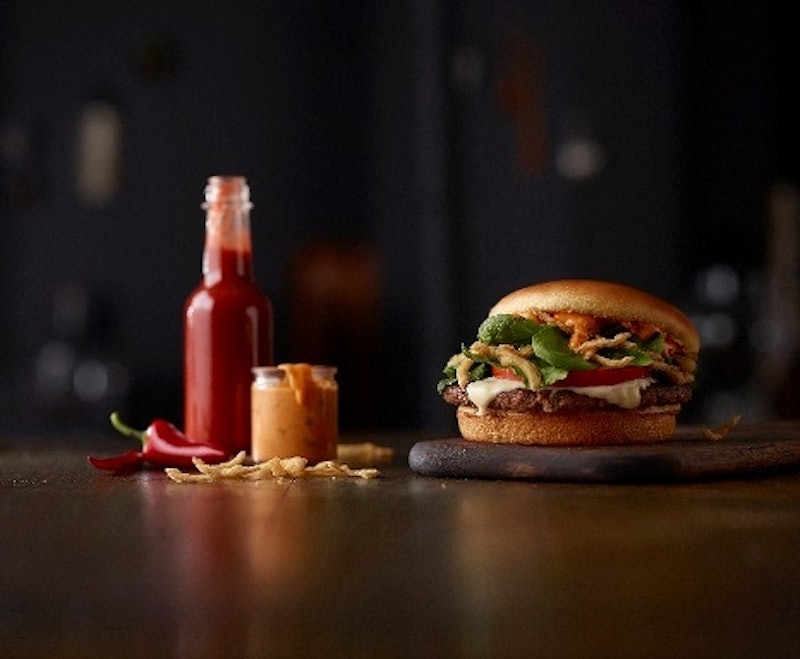 As you may have heard, McDonald’s announced recently that its newest burger will include two “it” ingredients: Kale and Sriracha. Sriracha, of course, is one thing (that is, delicious), but if Twitter’s reactions to McDonald’s kale burger are anything to go by, kale is… something else. Many seem to be having kind of a hard time dealing with the words “kale” and “burger” in the same sentence — although perhaps that’s understandable. It's... a somewhat incongruous pairing.

According to Nation’s Restaurant News, the Signature Sriracha sandwich will join McDonald’s Signature Crafted Recipes line by the end of July. Featuring crispy onions, cheddar cheese, a tomato slice, Sriracha Mac sauce, and baby spinach and kale, the sandwich marks the first extension of the Signature Crafted Recipes line, which originally launched in May of 2017. I’d argue that the inclusion of Sriracha and kale isn’t really all that surprising; this particular line of McD’s burgers and sandwiches has also featured things like guacamole, pico de gallo, and maple bacon, so clearly these menu items are all about the hype train. And, I mean, they’re all delicious, so I’ll admit that I’m not totally sure what the problem with them seems to be.

Still, though, folks seem to be having a hard time reconciling the idea of kale and a McD’s burger living in harmony together — which, of course, has led to some spectacularly hilarious tweets. Come with me now. We shall explore them together. Because honestly, this is exactly what your Wednesday needs.

More like this
TikTok's Butter Board Might Be The New Cheese Plate
By Emma Carey
On TikTok, Tinned Fish Date Night Is The Latest Viral Food Obsession
By Emma Carey
8 Completely Unserious Tips To Make Your Cuffing Season A Success
By Ginny Hogan
Why TikTok Is Flooded With Controversial Videos About "Pick Me Girls"
By Courtney Young
Get Even More From Bustle — Sign Up For The Newsletter