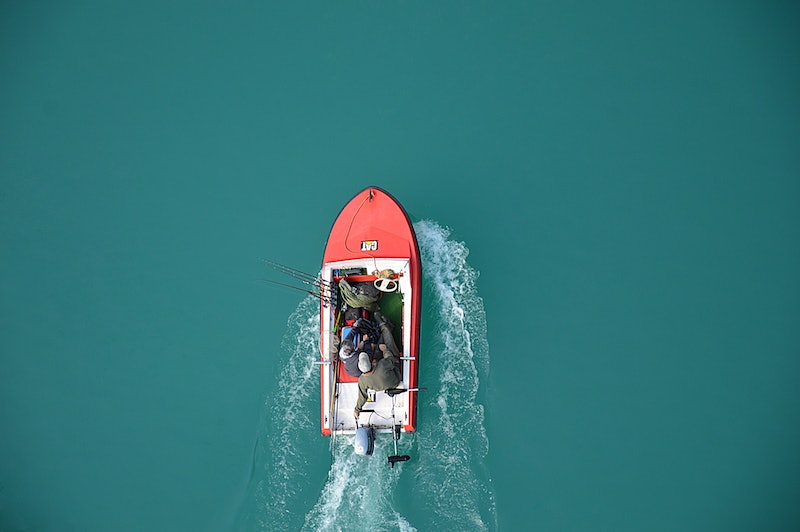 It's official: The Internet functions just like a toxic boyfriend. At the very moment you decide to break up, some brilliant meme comes along to reel you right back in. Today, that meme is #GayBoat, which has quickly joined the Babadook in the pantheon of unexpected LGBTQ icons. Honestly, 2017 has involved so many plot twists, it feels like living in an M. Night Shyamalan screenplay.

As you can imagine, the saga of our nautical homosexual takes a little explaining. Our story begins with Ken Ham, the fundamentalist Christian founder of Kentucky's Creation Museum. The Biblical theme park's sister attraction is a life-size Noah's Ark "built according to the dimensions given in the Bible." In true queer tradition, it's already a little over the top, but things recently took a more colorful turn — and I mean that literally, of course.

On Tuesday, Ham tweeted several photos of the gigantic ark lit up with a rainbow. As he explained, however, this is no mere decorating choice, but an attempt to "remind the world that God owns the rainbow & is a sign of His covenant." In case that didn't get the point across, he added, "Christians need to take back the rainbow... God owns it."

Although Ham didn't specify who stole it in the first place, the rainbow is an internationally-accepted symbol for the LGBTQ community. Naturally, when the LGBTQ people of Twitter noticed his tweets, they weren't fans of the implication. Within a few hours, they took the most mature, reasonable course of action available: trolling the ship out of the rainbow ark.

After all, we queer people are born with the ability to automatically recognize one of our own, even when they're a gigantic, inanimate object.

And so the ark was christened with a new name: Gay Boat. That being said, some speculated that our seaworthy hero falls under a different part of the LGBTQ acronym.

Either way, Gay Boat has been welcomed into the community with open arms.

So... party on the Gay Boat this summer? I'll see you there — look for the chick hanging out the corner with the Babadook.

More like this
The 19 Best Tweets & Memes About Bisexual Awareness Week
By Lexi Inks
Why TikTok Is Obsessed With Caesar Salads Right Now
By Alexis Morillo
Behind The Hilarity Of The "POV: You Walk Into My Room" TikTok Trend
By Lexi Inks
Why TikTok Is Flooded With Controversial Videos About "Pick Me Girls"
By Courtney Young
Get Even More From Bustle — Sign Up For The Newsletter