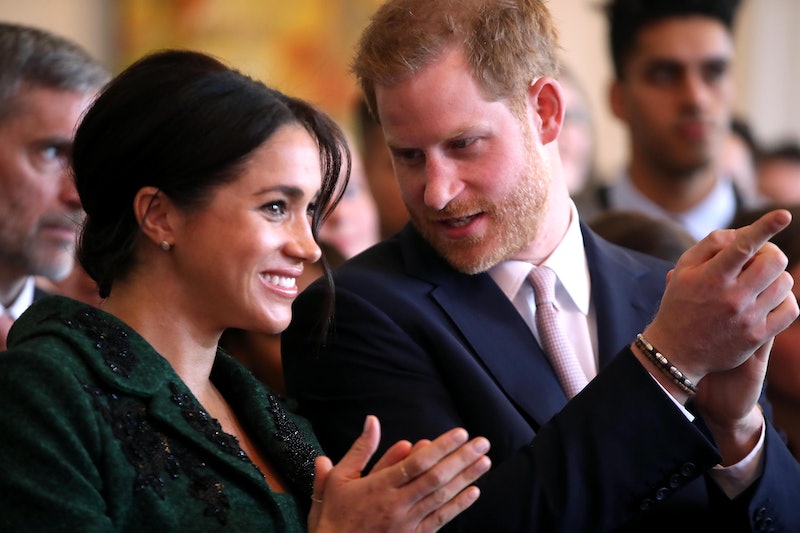 When you finally make the big leap and move into your first home, sharing that milestone with family and friends is priceless. And even though Prince Harry and Meghan Markle are, y'know, part of the royal family, that doesn't mean the experience of moving into their first home is any different. And according to The Sun, this occasion was made even more special as the Queen was the first royal to visit Frogmore Cottage after the Duke and Duchess of Sussex moved in.

"Her Majesty wanted to formally welcome the Sussexes to their new home so she was their first visitor," a royal source told the newspaper. "After all, they've practically moved into her back garden. She visited with other family members and Harry and Meghan were delighted to show them round." The visit reportedly took place at Easter, which seemed to coincide with Prince William and Kate Middleton's alleged visit after the Easter church services at St. George's Chapel, according to People, which Markle did not attend due to the Duchess being in the last stages of her pregnancy. According to People, Markle's mother Doria Ragland had also arrived at the cottage to make sure "she was nearby as the Duchess of Sussex's due date grows closer."

If the Cambridge's visit is true, then hopefully this will quell the continuous rumours that there's a rift between the two royal couples. This supposed estrangement recently rekindled in March after Kensington Palace issued a statement regarding the creation of a new Household for the Sussex's, which was described as a "long-planned move" by the Palace.

"The Queen has agreed to the creation of a new Household for The Duke and Duchess of Sussex, following their marriage in May last year. The Household, which will be created with the support of The Queen and The Prince of Wales, will be established in the Spring [...] This long-planned move will ensure that permanent arrangements for the Duke and Duchess's work are in place as they start a family and move their official residence to Frogmore Cottage. The Queen has given permission for the Duke and Duchess of Sussex to base their Household Office at Buckingham Palace".

As historian and author of blog Royal Musings Marlene Koenig told Town & Country, "[t]his is very normal. This is what happens when royals get married. Harry is a full-time working royal and he has a full-time working royal wife. It makes perfect sense." Royal commentator Victoria Arbiter also explained how this divide was inevitable as Harry and William "have very different roles" and "[i]t would have been too much for them to stay together." She added:

"Charles and Andrew don't share an office. Edward and Anne don't share an office. It was always going to happen. Because it happened upon Harry getting married, people looked for something to blame, which is bizarre. I don't know why we need to blame anybody. It just speaks to the level and volume of work that these couples are going to be carrying out." Amen to that.