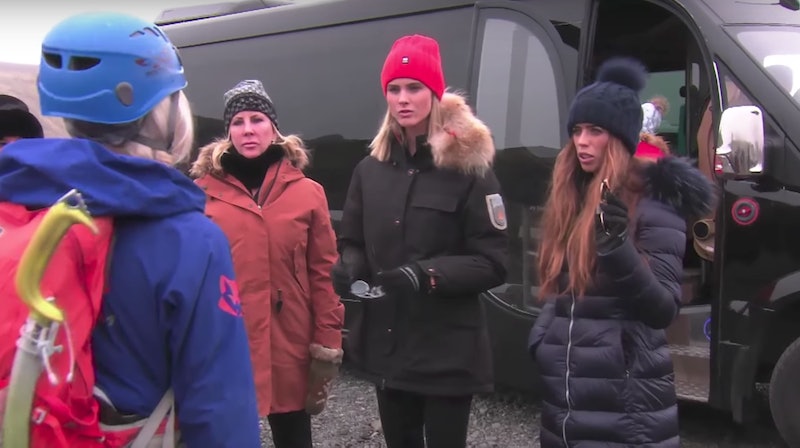 On last Monday’s episode of The Real Housewives of Orange County, the two factions of Season 12’s cast packed their bags, put their differences aside, and boarded an Iceland-bound plane together. You know that preview that aired at the end of last week’s episode? The one that made it seem like almost everyone made up and became best friends again? In a recent interview with Entertainment Tonight, Meghan King Edmonds confirmed that while nearly everybody clicks during the trip, plenty of drama happens after the RHOC cast returns from Iceland. Like an aurora borealis light show, the newfound peace among the O.C. Housewives doesn’t stick around forever.

Per Real Housewives tradition, the cast didn’t embark on this journey on some spontaneous whim. Like Bethenny Frankel’s tasting trip to Jalisco, Meghan’s ancestry adventure to Ireland, and Kyle Richards’ husband’s real estate party in Punta Mita, there was a specific purpose for the Season 12 outing: Lydia McLaughlin’s magazine sent the Housewives to Iceland for some magazine-related reasons. The show, er, Nobleman magazine has made it so the incredibly splintered cast has to interact for an extended amount of time, a move Season 12 has really needed.

Just as the preview for this week’s episode teased, it sounds as though Vicki Gunvalson gets along with just about everyone. Yes, She Who Has Been Ostracized From Half Of The Cast even buddies up with former best friend-turned-enemy Tamra Judge.

However, don’t expect this reunion to last too long. Judging from what Meghan told Entertainment Tonight, it appears as though Vicki and Tamra’s latest attempt at friendship was done before the jet lag could wear off.

“I think people will see [the cast getting along] in Iceland. I think everybody gets along with with Vicki. Well, actually don’t quote me on that. I might have spoken too soon. Everybody has fun with Vicki, and that’s so much fun, but it can’t last. It’s not sustainable.”

It can't last. It's not sustainable. Zoinks.

When asked who she’d oust from the cast, Meghan unsurprisingly replied, “Probably Vicki. ‘You’re out. Bye. No more lies. See ya.’” ET’s Brice Sander pointed out that a true reconciliation between Vicki and some of the other O.C. Housewives seems unlikely, and she said, “I feel the same way.” It sure seems like the rest of the season won’t be lacking in the friction department.

Who among the O.C. Housewives might not get along with the O.G. of the O.C. while they’re in Iceland? Here’s a wild guess: Her name probably rhymes with “Flannon Fleador.” Back in September, Shannon told ET,

“It’s different. It’s like [the cast is divided into] two islands. I’m sorry, I don't want to be friends with Vicki.”

The lemon-loving Bravolebrity really doesn’t seem willing to budge on this, either. She went on to add that Tamra is a “much nicer person” and more open to making peace with Vicki. How, oh how does this sit with Shannon? Can't wait to find out.

As far as the group dynamic during the Iceland vacation goes, Shannon said,

“Tamra and I, of course, had a conversation about it. We didn't want to have a lot of tension. So, as we entered into a different country, we entered a different mindset of, we're not going to make this trip stressful and make everyone tense. So, we were more open to having a conversation or, you know, doing things together. We did everything together.”

Alas, as Meghan put it, it couldn't last.

The cast’s post-Iceland falling-out isn’t exactly a twist; the O.C. Housewives’ Bravo blogs have been pretty straightforward about where everyone stands nowadays, and their social media posts rarely mince words. Vicki recently shared a picture she took with Kelly Dodd, Peggy Sulahian, and Lydia, writing, “For the #RHOC reunion I know which couch I’m sitting on." In Real Housewives speak, that’s her not-so-cryptic way of saying Kelly, Peggy, and Lydia are her allies, whereas Shannon, Tamra, and Meghan are not. Again, given everything that's happened on the show and on social media, that Instagram caption didn't come out of left field.

The short-lived reconciliation that apparently happened in Iceland, on the other hand? You can watch that preview a thousand times, and that tearful hug between Tamra and Vicki will still be as surprising as ordering a ride to the airport that could accommodate six people and a dozen bags and the car service sending "a family van.”