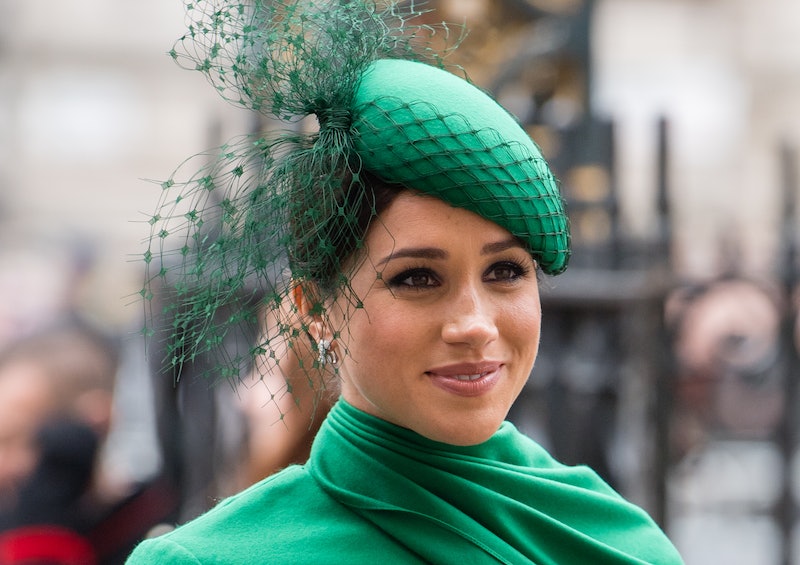 Meghan Markle's final royal appearance is now officially behind her. The Duchess of Sussex stepped out in London on Commonwealth Day to complete her royal duties as she transitions out of her role. Though she did not walk in the traditional processional to Westminster Abbey like in years past, there was plenty of time for the crowd to catch a glimpse of her look. For the event, Markle chose a bright green monochrome look from Emilia Wickstead. It was an apt choice as she has been known to support British designers in the past and especially during her latest London visit.

Her dress was mid-calf in length, with long sleeves and a pencil silhouette. On top, a cape billowed out behind her in the wind. Markle had a matching green William Chambers hat with a giant tulle knot and slipped into understated nude pumps from Aquazzura. In her left hand was a tiny hunter green bag, designed by Gabriela Hearst, and in her right, of course, was Prince Harry.

Many are making the comparison to Princess Diana, as she chose a similar look for Trooping the Colour in 1982. For that event, she wore the same color green, by way of a button-front shirt dress, and donned a very similar looking hat as well, complete with a tulle bow.

As the couple will no longer be using their royal titles after April 1, this was the final public event for Prince Harry and Meghan Markle. That said, Markle is sure to be making headlines with her elegant and youthful style choices for decades to come.

More like this
Harry Styles’ Red Carpet Looks Have One Thing In Common
By El Hunt
15% Pledge Director LaToya Williams-Belfort On The Impact Of Supporting Black Business
By Dominique Norman
Why Princess Anne Will Remain Princess Royal For Years To Come
By Sophie McEvoy
Bella Hadid's Best Runway Looks Of All Time From Paris, Milan, & More
By Allie Fasanella
Get Even More From Bustle — Sign Up For The Newsletter