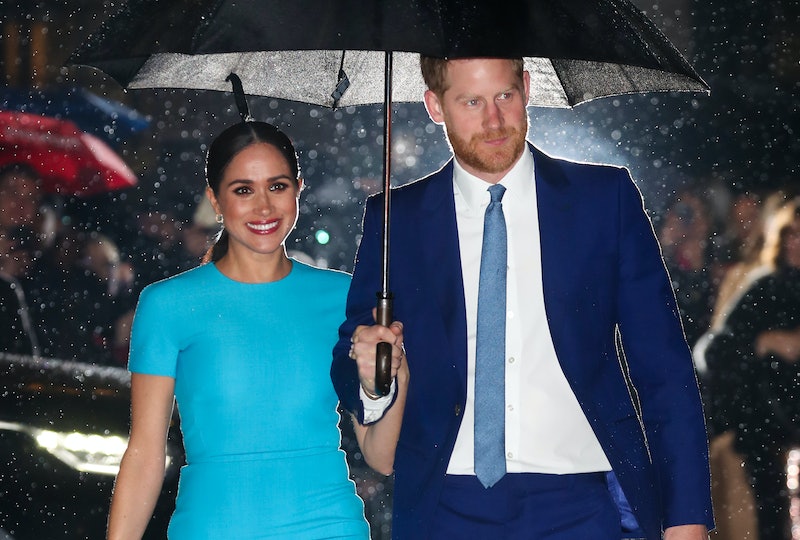 Meghan Markle accompanied Prince Harry to the annual Endeavour Fund Awards in London on Thursday. It marked the couple’s first joint public appearance together in the UK since they announced they’re stepping down from their royal duties and relocating to Canada.

For the affair, Markle stepped out in a fitted teal sheath dress by British designer Victoria Beckham. Accessory-wise, she opted for navy suede Manolo Blahnik heels, a Stella McCartney clutch, and small diamond hoop earrings. Her hair was styled in a low ponytail, and she sported a bright red lip to complete the chic ensemble.

It's notable that Markle chose a British designer for the occasion. While it could simply be a coincidence, the Duchess is usually very intentional about her fashion choices. With this being her final round of official duties in London as a working royal, she may be using her outfit to pay homage to the UK.

Ever since becoming a royal, the Duchess of Sussex has worked to show her support for British designers through her wardrobe. At Commonwealth Day in March 2019, for example, she wore a printed white dress, which was also designed by Victoria Beckham. That same month, she was spotted in a brocade Amanda Wakeley dress for an event at Buckingham Palace.

While there’s some speculation that Markle could return to acting, the former Suits star has kept a relatively low profile ever since the infamous announcement heard ‘round the world. She’s mostly been spending quality time with friends and family (including Baby Archie) in her and Prince Harry’s new home base of Vancouver.

The Duchess’s attendance at the Endeavour Awards, which took place at London’s Mansion House, will likely be one of her final public appearances since the Sussexes are slated to wrap up their official royal duties on March 31. The awards are a celebration for wounded British servicemen and women who have participated in sporting and adventure challenges in the last year.