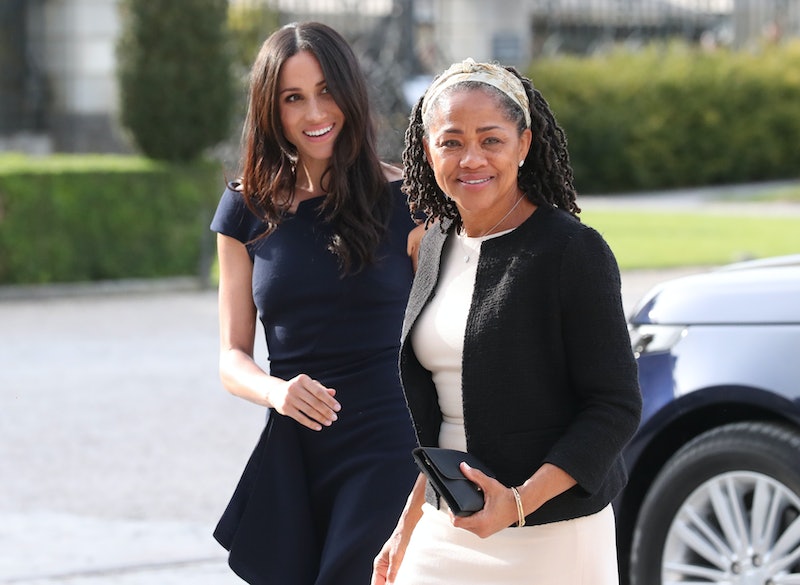 Monday has barely begun, and the week is already off to an amazing start. That's because Meghan Markle and Prince Harry's baby has officially arrived. The news was revealed via the royal family's social media, including the Duchess and Duke of Sussex's own Instagram account. Part of these announcements included sharing Markle's mother Doria Ragland's reaction to the royal baby, and yes, it's just as sweet as you'd hope.

"The Duchess’s mother, Doria Ragland, who is overjoyed by the arrival of her first grandchild, is with Their Royal Highnesses at Frogmore Cottage. Her Royal Highness and the baby are both doing well."

Of course, Ragland was by Markle's side through it all. This mother-daughter duo is incredibly close, as proven by reports breaking a few weeks ago that she had arrived in London to be close to her daughter as she prepared for the baby's birth.

Back when Markle's pregnancy was first announced, royal commentator Omid Scobie shared that Ragland was "very happy about this lovely news and looking forward to welcoming her first grandchild." And based on the royal family's new Twitter update, Ragland couldn't be happier that the moment has finally arrived.

Unsurprisingly, Ragland isn't the only one thrilled about the news. New dad Prince Harry made a brief speech about the baby's arrival on Monday. He told reporters,

"I’m very excited to announce that Meghan and myself had a baby boy early this morning, a very healthy boy. Mother and baby are doing incredibly well. It’s been the most amazing experience I can ever possibly imagine. How any woman does what they do is beyond comprehension."

Harry continued, "We’re both absolutely thrilled and so grateful to all the love and support from everybody out there. It's been amazing, so we just wanted to share this with everybody."

It's been a whirlwind Monday morning, not only for the new parents (understandably), but also any royal watchers. First, Buckingham Palace confirmed that Markle had gone into labor, and soon after that, they revealed the baby boy had actually arrived that same morning.

Currently, the royal baby's name has not been announced, but there's a very good reason for that. On Monday, Harry told reporters they're "still thinking about names," while also mentioning he planned to see reporters as a family in a few days' time — likely when they do their small photoshoot.

Until then, the guessing game for the name continues, but royals fans can at least take comfort knowing that Markle and Harry are surrounded by loved ones at this time, including the supportive and "overjoyed" Ragland.