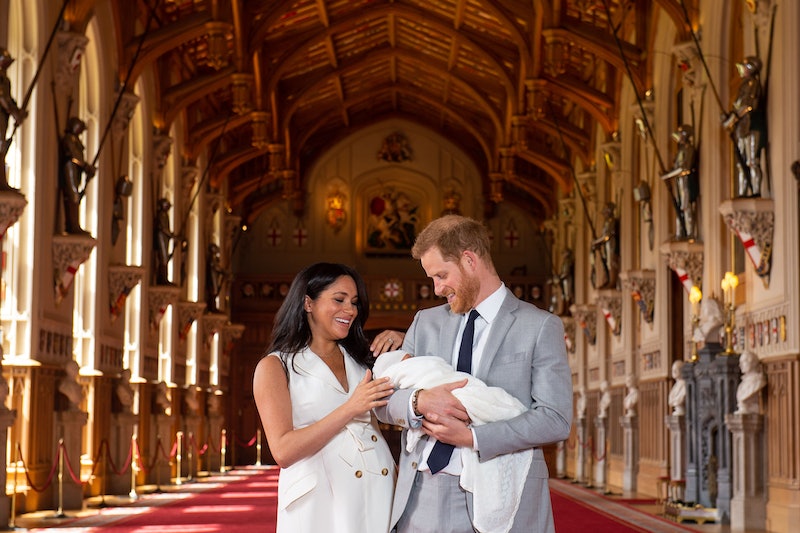 On Wednesday, May 8, the Duke and Duchess of Sussex unveiled their newborn son to the entire world. The photocall — which only lasted for a few minutes — took place inside a grand room at Windsor Castle. The couple answered a few questions about their first child and Meghan Markle's royal baby comments proved just how excited she is to be a mother.

In a brief interview, Meghan said the entire experience had been "magic." She continued: "It's pretty amazing, I have the two best guys in the world so I'm really happy." The couple's newborn son was also described as "the dream" by his mother. "He has the sweetest temperament, he's really calm," Meghan said. Harry showed off his humorous side, adding: "I don't know who he gets that from."

The couple were then asked if the baby looked like anyone in the family. Meghan replied: "We're still trying to figure that out." But Harry noted that "his looks are changing every single day. Everyone says that babies change so much over two weeks. We're basically monitoring how the changing process happens over this next month."

Baby Sussex remained asleep and pretty covered up throughout the entire photocall. Photographers asked to see a little more of the newborn's face, to which Harry joked: "He's already got a little bit of facial hair as well. Wonderful." The Duke also called parenting "amazing. It's only been two-and-a-half days, three days, but we're just so thrilled to have our own little bundle of joy."

Harry and Meghan finished their interview by thanking everyone "for all the well wishes and kindness." The pair said that they were off to show the Queen and Prince Philip their eighth great-grandchild. After this meeting, it is expected that a name for the royal baby will be announced.

It's not surprising that the couple remained relatively tight-lipped at the photocall. As a royal family statement declared in April, Harry and Meghan decided to keep details of the birth private. Now that the baby is here, a similar level of privacy is expected.

The Duke and Duchess of Sussex's son was born on Monday, May 6, at 5:26 a.m. The media was not alerted until the afternoon, reports the Telegraph.

It's still unclear where Meghan gave birth. According to a recent report from the Daily Mail, the Duchess had planned to have a home birth. But being a week overdue, she was reportedly taken to a London hospital on Sunday. As Hello! magazine reports, Buckingham Palace have not revealed any more, stating: "Details of the birth are private."

Even the photocall was in some way secretive. Only one media photographer, one reporter, and three cameramen were allowed into the room, reports the Telegraph. This small group was joined by the couple's personal photographer and a household photographer.

Speculation over the name of the newborn is mounting. Bookmakers have declared that Alexander and Spencer (a tribute to Harry's late mother, Diana) are the current favourites, reports the Independent. While you wait for the impending announcement, you'll just have to keep rewatching that super cute video.

More like this
Camilla Paid Tribute To The Queen In A Heartfelt Video Message
By El Hunt and Sam Ramsden
King Charles Ensured These Subtle Tributes Were Included In Queen Elizabeth’s Funeral Wreath
By Sophie McEvoy
Will Archie & Lilibet Attend The Queen's Funeral?
By Sam Ramsden
Why Princess Anne Will Remain Princess Royal For Years To Come
By Sophie McEvoy
Get The Very Best Of Bustle/UK