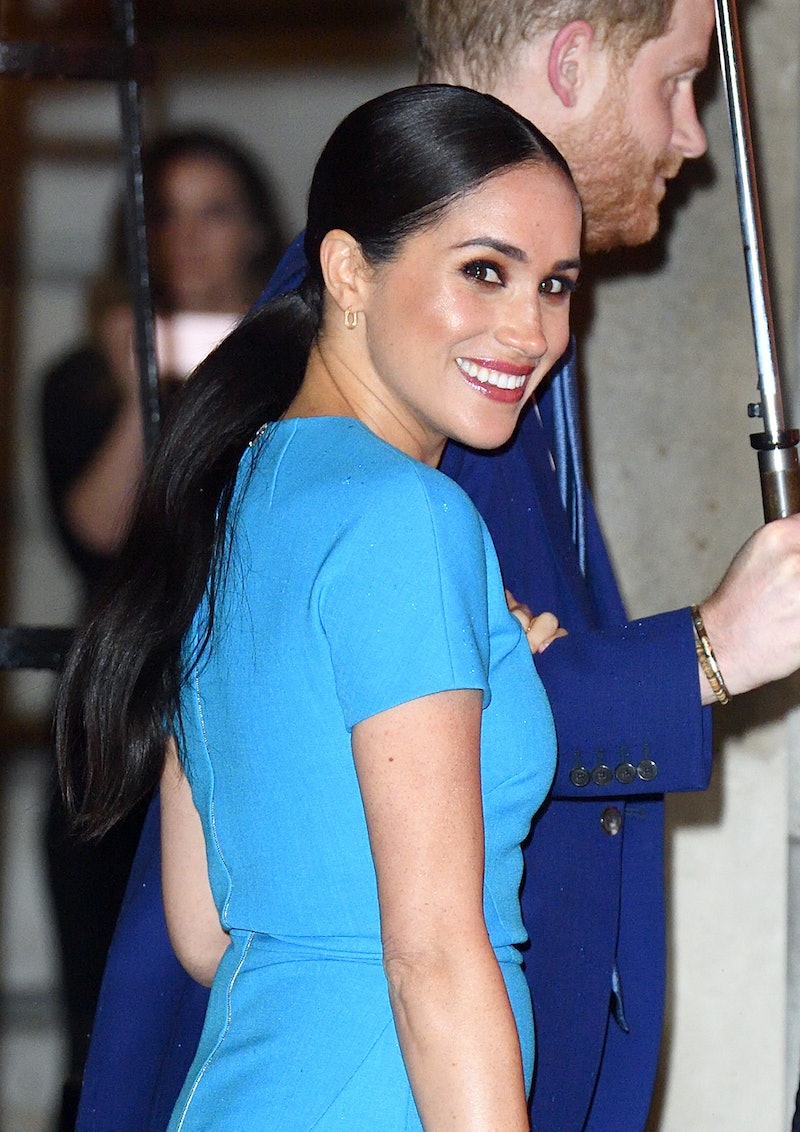 Meghan Markle's time as an official working member of the royal family is coming to an end. She seems to be saying so long to the monarchy with a style bang. Her last appearances have been punctuated with a return to her pre-royal style which means Meghan Markle's smoky eye has been back and better than ever.

Not only did Markle appear at the Endeavor Awards wearing more makeup than she's ever worn before — including a deeper, more chocolate eye look — but at Commonwealth Day services, the Duchess also wore a navy smoky eye. Yes, Meghan Markle donned blue eyeshadow for her last public event. What a way to say goodbye!

For those who have been admiring her looks over the past few days, there's good news. You can get Markle's smoky eye for yourself, and it isn't even that difficult.

Markle's longtime friend and makeup artist Daniel Martin was responsible for the amped up looks during her time in London, and while the artist can't comment on exactly what he uses on Markle, he has discussed techniques to get her look in the past — specifically the similar smoky style he created for her wedding day.

Couple Martin's tips with interviews Markle did as a working actor, and you've got all you need to piece together your very own Meghan Markle makeup look.

In an interview with Glamour following Markle's wedding to Prince Harry, Martin discussed how he gave the Duchess her glowing skin and stand out eye. To get the look, he cited a use of warm tones, like rust and copper, to tight line and add definition to the lashes.

Back in 2014, Markle spoke with Allure about her favorite beauty products and specifically called out MAC's Teddy liner. The bronzed copper shade may not be exactly what Martin uses on the royal, but it certainly fits the warm-toned description needed to give you that perfect tight line.

Martin also explained in his Glamour interview that he used both a cream and powder eyeshadow to create a look that, "melds and break downs naturally over time, creating a depth that appears smudgy and smoky in pictures."

While there are many options on the market, Laura Mercier's Caviar Sticks are the best-selling cream shadow at Sephora and shade Burnished Bronze is the perfect warm-toned hue to use as a base. Plus, if you want to rock her navy eye from Commonwealth Day, there's even a shade for it — Indigo.

As for the powder shadow, Martin explained in Refinery29's Beauty with Mi that he typically only uses two shadows on Markle and reached for this exact Dior palette to recreate one of her looks for the video. Plus, Martin used to be a brand ambassador for the luxury brand and has likely used their products on Markle.

While sure, Martin is a Dior brand ambassador and has used this mascara in the past to finish Markle's look, she also has her own connection to it. In the same 2014 interview with Allure, she cited the mascara as one of her own personal favorites as well.

While Markle's time as a working member of the royal family may be coming to an end, she certainly went out with a beauty bang, and the best part is that her look is one you can get on your own.