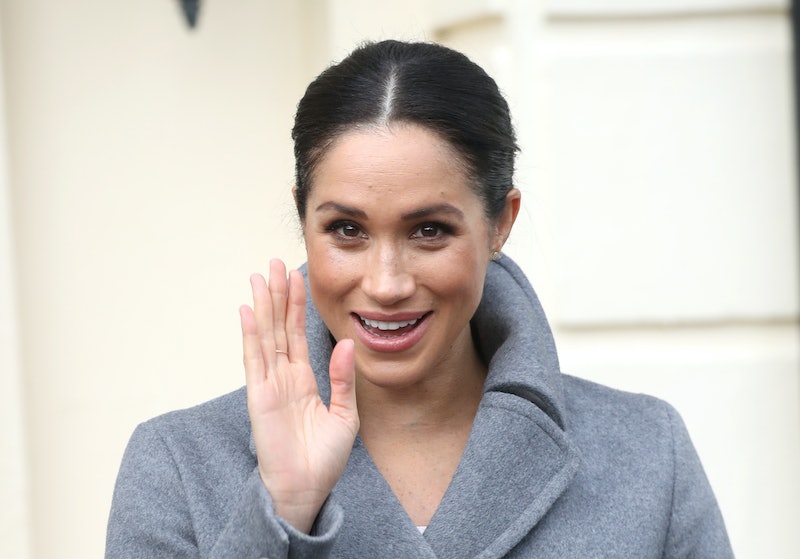 When it comes to royals signature styles, Meghan Markle may just take the cake for memorable looks. From her belted coats to her freckles, there are things you can expect to see from the Duchess of Sussex, but is Meghan Markle's messy bun getting a makeover? Lately, her signature hairstyle has been looking a bit more sleek than usual, and it may just be undergoing an evolution.

While the duchess's long waves are another of her famous looks, it's her messy bun that may just garner most of the attention. Markle has been wearing the style since before she and Prince Harry even officially tied the knot. The perfectly imperfect 'do is different from what fans see of Markle's sister-in-law Kate Middleton who typically wears her hair perfectly blown out (like drool worthy, hair perfection kind of blow out) or back in a way that's secure and leaves not a hair out of place. For Markle, though, it's all about the done, undone look.

Markle's messy bun may have become her most obvious signature when she bucked tradition and wore it for her wedding day. While some may have expected more of a polished look, Markle let pieces of her hair fall into her face and wore the signature style.

Now, however, it seems as though the duchess is switching things up.

On Tuesday, Markle visited a nursing home for former British entertainers where her bun was looking a bit more pulled back than normal. While the bun itself was still a bit on the messy side, Markle was no longer allowing pieces of hair to frame her face, a marked difference from how she usually wears the look.

Before her royal visit to the nursing home, Markle gave a surprise appearance at the British Fashion Awards. At the show, the duchess presented Givenchy designer and creator of her wedding gown, Clare Waight Keller, with the award for designer of the year. Markle was basically glowing in a black Givenchy dress, but her hair is also notable. Unlike her typical style, the bun is pulled tightly back.

While in Australia, Markle chose to wear her hair in its messy style for the vast majority of the trip. However, it was during her visit the more sleek style she's rocking now started to appear. The duchess not only wore her hair half up during an Invictus Games award ceremony but it was certainly more sleek as well.

Markle's bun isn't the only hairstyle that has begun to look a bit more neatly swept back, though. While in Tonga, she wore a ponytail several times, but unlike her formerly loose style, it was a much more pulled back look, mirroring the look that the bun seems to now be taking.

Is Meghan Markle's signature messy bun getting an update? Maybe. With several events with a more sleek style, it seems she may be trying something new. However, that's also kind of the key. The new style could just be a fun experiment. Either way, though, Markle's hair game is amazing. From blow outs to messy buns to yes, even slick looks, she's got some serious royal hair game.