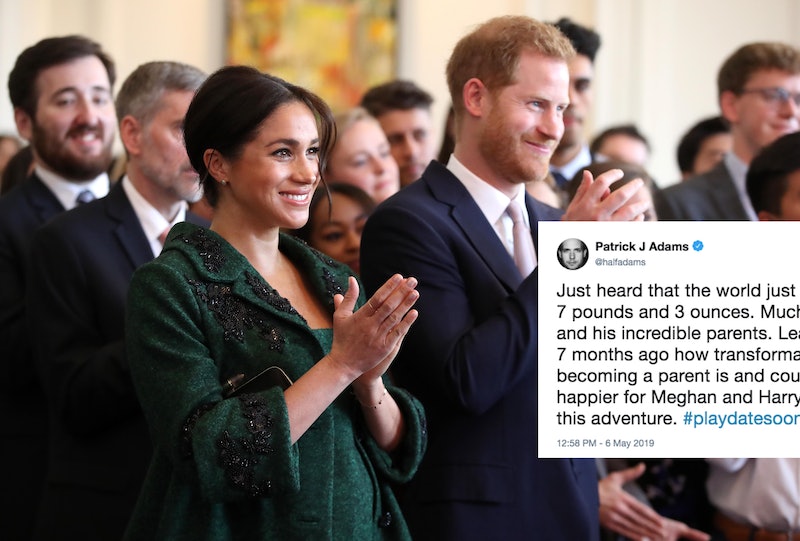 In light of the exciting royal baby news, well wishers from around the world have sent positive messages to the Duke and Duchess of Sussex. Of course, those closest to the couple have also expressed their joy about hearing the news. As E! News reported, Meghan Markle's Suits costars congratulated her on giving birth to Baby Sussex by writing messages on Twitter that are filled with nothing but love.

As fans are now well aware, Markle and Prince Harry welcomed a baby boy on Monday, May 6. The happy news was confirmed via an official statement on the royal family's website, in which they detailed that the new mom and her baby were doing well and that the couple's family members, including the Prince of Wales and the Duke and Duchess of Cambridge, had been notified about Baby Sussex's birth.

Prince Harry even spoke out about the news himself and explained to the press that he was over the moon about the new arrival, saying, in part,

"We’re both absolutely thrilled and so grateful to all the love and support from everybody out there. It's been amazing so we just wanted to share this with everybody."

Naturally, royal fans everywhere expressed their excitement over the Duke and Duchess of Sussex's major news, including those closest to Markle, who took to Twitter to share some incredibly sweet messages.

Her Suits costar, Patrick J. Adams, even joked around about having a playdate with his child and Baby Sussex. He wrote:

"Just heard that the world just got heavier by 7 pounds and 3 ounces. Much love to him and his incredible parents. Learned first hand 7 months ago how transformational becoming a parent is and couldn’t be happier for Meghan and Harry as they begin this adventure. #playdatesoon"

"Hearts are leaping for a beautiful, wondrous and healthy baby boy! Sending much love and wishes for every blessing across the pond today and everyday!"

In case those two tributes weren't enough, the show's official Twitter account also took a moment to share well wishes on behalf of the whole team behind the USA Network show. The Suits account posted:

"The entire #Suits family sends their congratulations to The Duke and Duchess of Sussex, Prince Harry and Meghan Markle, on the birth of their baby boy!"

While Markle may not be acting anymore, it's clear that her castmates still think the world of her. And considering the baby news just broke earlier on Monday morning, plenty more congratulatory messages will likely continue to come in from fellow celebs and fans alike.

Based on Adams' message, fans can cross their fingers for lots of future playdate photos of Markle's baby having a blast with his kid. They'll be able to keep their Suits legacy alive through the next generation — and really, what more could fans want?

More like this
Camilla Paid Tribute To The Queen In A Heartfelt Video Message
By El Hunt and Sam Ramsden
The Queen’s Beloved Corgis Played A Special Role At Her Windsor Service
By El Hunt
King Charles Ensured These Subtle Tributes Were Included In Queen Elizabeth’s Funeral Wreath
By Sophie McEvoy
Will Archie & Lilibet Attend The Queen's Funeral?
By Sam Ramsden
Get Even More From Bustle — Sign Up For The Newsletter