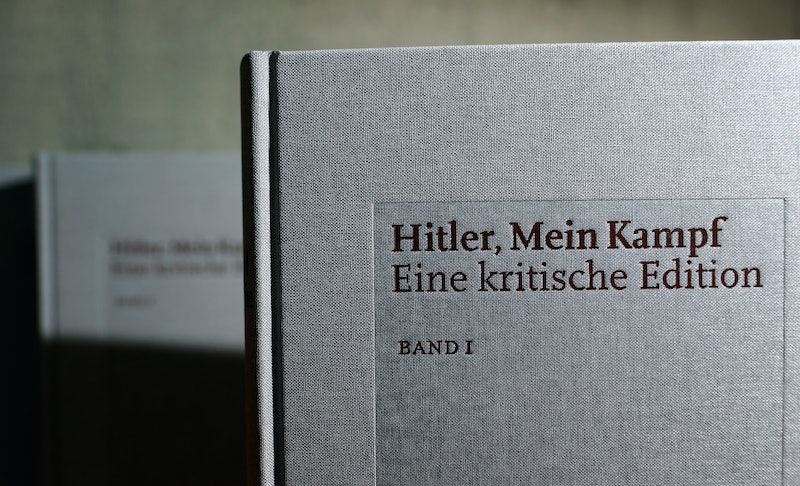 Before the beginning of 2016, it had been a long time since Adolf Hitler's infamous manifesto Mein Kampf was readily available on German bookshelves. A year later, Mein Kampf is a bestseller in Germany — and that's actually a very, very good thing.

I know what you're thinking: Crazy right-wingers and neo-Nazis are rushing out to buy the anti-Semitic document in frightening numbers, fueled by the craziness that was 2016. However, the situation basically couldn't be any more different than that. The German state of Bavaria held the rights to Mein Kampf after the Second World War, and they decided not to publish it in order to stop its ideology from spreading.

Texts pass into the public domain 70 years after their author's death, though, so Mein Kampf was set to cross that line at the end of 2015. Instead of leaving it open to interpretation from any side, the Institute of Contemporary History of Munich (IfZ) decided to head things off with a critical, annotated edition of Hitler's words.

What they ended up releasing was a far cry from the yellowed, antique copies of the book that have been turning up at used book stores around the world since the end of the war. Instead, it was a three-year project resulting in a 2,000-page book with over 3,500 critical annotations from a team of historians and scholars. Rather than a picture of the Führer's face on the cover, it's simple and white; instead of letting readers interpret the text for themselves, the annotations point out all of Hitler's lies, anti-scientific statements, and usage of stereotypes.

Unsurprisingly, the new release of Mein Kampf did not come without controversy, especially as xenophobic right-wing parties gained strength across Europe. However, as it hurtled through several new print runs in the year since its initial publication, most groups have come to strongly support it. Even many Jewish groups are supportive of the new release, which has found most of its readership in teachers of history and politics and others interested in those subjects rather than people who actually subscribe to the beliefs in the book.

As IfZ Director Andreas Wirsching says, "discussions about Hitler’s worldview and dealing with his propaganda presented an opportunity — at a time when authoritarian political beliefs and far-right slogans are again gaining in popularity — to re-examine the ominous roots and results of such totalitarian ideologies."

Thousands of people with a desire to look critically at racism and to study the history of how Hitler gained his following are exactly what the world needs right now, and Wirsching and his institute have proved that those people exist. In the past decades, Germany has been upfront about facing its dark past, and this is a continuation of that pattern in a time when antisemitism is just one of a litany of negative sentiments making big splashes in politics.

Critical thinking doesn't come naturally — it's a skill that needs to be taught, practiced, and maintained. Readers of this critical edition of Mein Kampf don't have to do it themselves, but with all of the annotations, they see critical thinking in action. Everyone who reads a segment of this book will come away with an example of how they should approach other texts in the future, whether it's news, Twitter, or political speeches.

Instead of worrying about a rise in neo-Nazism caused by this book, you should celebrate its success in the market, and hope that the English edition will be met with the same success when it comes out. It's rare that you get the chance to see racism so bluntly and painstakingly confronted head-on, but Germany is currently enjoying the chance to do exactly that.