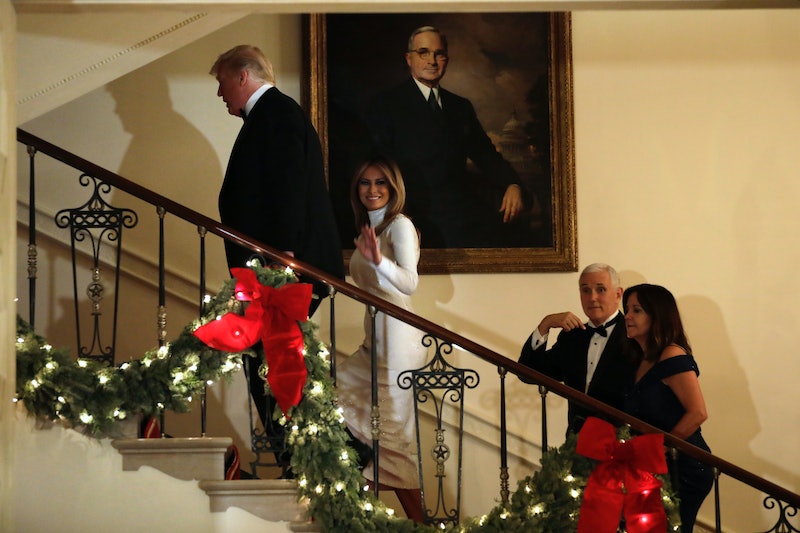 The next presidential election is over a year away, but at an event Monday, Melania Trump and Karen Pence said that it would be a privilege to spend four more years in the White House. Trump and Pence made the comments during a Q&A with students at Albritton Middle School at Fort Bragg, North Carolina, the Associated Press reports.

“I think our husbands are doing [a] fantastic job and I will support my husband if he decided to run again,” Trump said, according to the Associated Press. "And yes, it’s a privilege, a great honor to serve and I will be here.”

Pence echoed the sentiment, telling students that it's "a privilege and honor to be able to go on this journey and it would be a privilege to continue as well."

Donald Trump has already declared his intention to run for reelection, and in fact filed his papers to do so the day he was inaugurated. According to Vanity Fair, the president has held talks with his advisers on the topic of whether he should replace the vice president on the ticket when he runs for reelection in 2020. Publicly, the president has never suggested that this is the case and said in November that the vice president is "100% loyal," CNN reported at the time.

Trump's comments come amid numerous reports that she isn't happy in the White House. A March 2018 Us Weekly report, for example, claimed the first lady just wanted to "get away from Donald." And journalist Michael Wolff reported in his book Fire and Fury that Trump didn't want her husband to run for president in the first place and that the president and his wife sleep in different beds. Additionally, a source told Vanity Fair in November 2011 that the two live separate lives.

"I didn’t bother to read whatever it is that you say US Weekly reported - because Mrs. Trump has consistently stated how honored she is to be First Lady of the United States, and her focus in helping children across our country and the world. That has not changed," the first lady's spokeswoman Stephanie Grisham told Bustle via email on Tuesday.

Both Grisham and Trump have denied those reports in the past as well. "'It is sad when people try to further their own agenda by commenting on me and my family, especially when they don't know me," Trump, through Grisham, told the Daily Mail in response to the US Weekly piece. Then, Trump told ABC News in October 2018 that she and her husband are "fine." A few months later, in January 2018, Grisham told Bustle that Wolff's book is "clearly going to be sold in the bargain fiction section."

"Mrs. Trump supported her husband's decision to run for President and in fact, encouraged him to do so," Grisham said to Bustle at the time. "She was confident he would win and was very happy when he did."

According to the Associated Press, Trump said on Monday that, although becoming first lady significantly changed her life, she "would not change [it] for anything."

"I love what I do," Trump told the students, according the Associated Press. "I will always shine a light on children and [the] next generation."

This report has been updated.