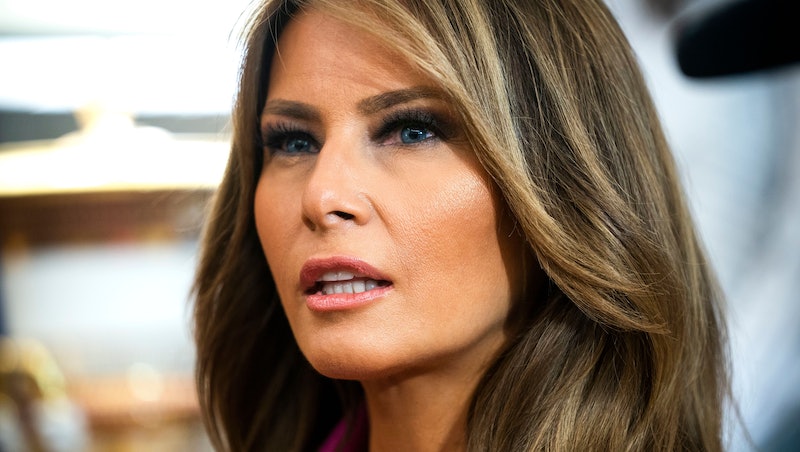 Whenever a First Lady is conducting a state visit, no matter which First Lady is it, people across the world become excited about the endless possibilities of what designers they'll be repping and whether they'll be linked to the country in question. Air Force Once hadn't even left the tarmac in Maryland, and Melania Trump's British-inspired Gucci dress had already captured the attention of those across the pond. Adorned with British landmarks like the Houses of Parliament and Tower Bridge, Melania's city print dress was her outfit of choice as she boarded the presidential plane bound for the UK.

The First Lady paired the dress with "a green snakeskin belt" and "pointed nude stiletto pumps," Yahoo Style notes. And if you've got an extra £2,650 to spare, you too can rock this dress like the First Lady thanks to luxury designer site Farfetch.

The dress is described on the site as "an unmistakable example of [Gucci's] superior craftsmanship, expert tailoring [with] a charming print," this midi dress is made from 100 per cent "purely soft cream silk", adorned with "antique effect gold-tone GC buttons, and "completed by a spread collar, long sleeves, button cuffs, two chest patch pockets and side pockets."

Speaking to The Express about the dress, journalist Katie Betts said:

"The best choice of outfit, in terms of diplomacy, would be to wear the work of an English designer or a young American designer. The first family should represent our country with dignity and pride, but it would also be gracious gesture if they acknowledge the British fashion industry in some way."

Seeing as Melania wore six different outfits during the Trump's recent four-day state visit to Japan (by designers such as Calvin Klein and Loro Piana), as the Daily Mail reports, it's possible she'll rep some more British designers if her outfit changes follow a similar pattern during their UK visit.

And it seems she's already getting a head start on that front, as Melania had an outfit change aboard Air Force One during the trip from the States to the UK. While the First Lady stepped onto the plane in Gucci, once the family had landed at Stansted Airport, Melania emerged off the plane in a "navy skirt suit" with a Burberry silk shirt, as the Daily Mail reports. Similar in design to the dress, the publication noted that the shirt is "printed with military medals" which could be seen as "an apparent nod to the upcoming D-Day anniversary." The Burberry shirt is priced on their website at £650, and is described as "a sleeveless pussy-bow blouse in soft silk, accented with time-honoured archive scarf prints."

The Trump's first day in the UK is pretty jam-packed with multiple events to attend, including a state dinner at Buckingham Palace, where the president and the Queen are expected to both make speeches. The crowd will include "prominent Americans living in Britain," the BBC reports. With a busy schedule, there will be plenty more outfit changes to come for Melania.