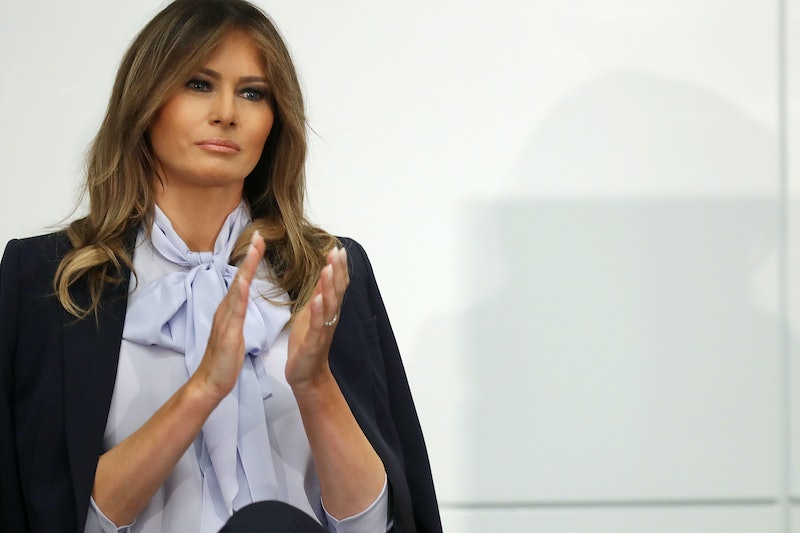 For promoting President Donald Trump's famous #MAGA slogan, a July tweet from Melania Trump's spokeswoman has gotten a Hatch Act violation warning, according to The Hill. On Thursday, the U.S. Office of the Special Counsel acknowledged that it gave Stephanie Grisham a warning for posting partisan content.

Grisham's July 11 tweet drew the attention of many at the time, including the watchdog group Citizens for Responsibility and Ethics in Washington and Sen. Tom Carper (D-Delaware), who publicly shared a letter on the subject from the Special Counsel's office on Thursday. In the memo, the office told Carper that it had "concluded that Ms. Grisham's tweet violated the Hatch Act." Bustle has reached out to Grisham for comment.

Grisham's tweet appears to have been deleted, but the letter quotes it: "Three years ago today I listened to my gut & joined the Trump team in #PHX...& life has never been the same. So proud to work for both ⁦@POTUS⁩ ⁦@realDonaldTrump⁩ & ⁦@FLOTUS⁩ #MAGA"

The Hatch Act prohibits public officials from using their platforms for "political activity," or promoting partisan goals. At issue is the fact that she included the "MAGA" slogan: As the office notes in its letter, "Tweeting a campaign slogan of a current candidate for political office constitutes political activity."

Trump is running for reelection in 2020 and already conducting campaign rallies. In March, the Special Counsel's office published "updated guidance" on the Hatch Act (which has been around since 1939) that specifically addressed his reelection campaign. The office noted that the prohibition against political activity is "broad":

For example, while on duty or in the workplace, employees may not: wear, display, or distribute items with the slogan "Make America Great Again" or any other materials from President Trump's 2016 or 2020 campaigns; use hashtags such as #MAGA or #ResistTrump in social media posts or other forums; or display non-official pictures of President Trump.

The penalty for those who violate the Hatch Act can include suspension, firing, or a fine of up to $1,000, according to The Hill. But although the Special Counsel's office is the body that declares that a Hatch violation has occurred, the authority for actually taking disciplinary action rests with the White House, per The Hill — and the Trump administration seems to have opted not to deal out punishment in other cases.

Many administration officials have violated the Hatch Act since Trump entered office. White House aide Kellyanne Conway was found to have done so in March, for instance: The Special Counsel's office declared that Conway conducted two TV interviews in which she "impermissibly mixed official government business with political views about candidates in the Alabama special election." Other violations from the Trump administration have come from White House Social Media Director Dan Scavino and U.S. Ambassador to the United Nations Nikki Haley.

"We have laws in this country for a reason," Sen. Carper tweeted in July. "The Hatch Act ensures government officials don't use their positions to unfairly influence political activity, like elections. But the Trump Administration continues to completely disregard this law."