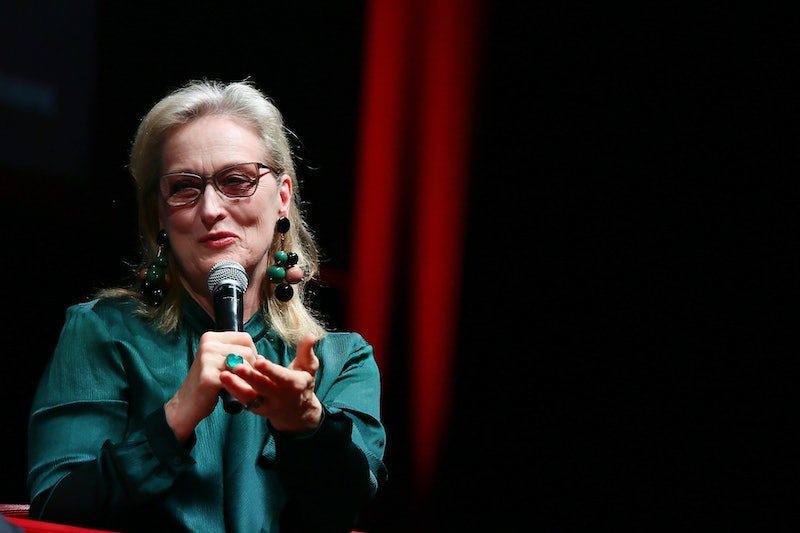 It should come as no surprise that Meryl Streep's Golden Globes speech irritated Donald Trump supporters. As the critically beloved actress accepted the Cecil B. DeMille Lifetime Achievement Award on Sunday night, she dedicated the last two and a half minutes of her time on stage to recalling the moment Trump mocked a disabled reporter and expressing her devastation at such a performance effectively having led to his presidential victory. Her words instantly became the subject of headlines and posts all over social media.

One of the most common criticisms against Streep's speech has been that as a Hollywood celebrity, she should stay in her lane and not talk politics. It's almost as if these critics have forgotten that Donald Trump was himself a celebrity before winning the election.

Blaze host Tomi Lahren took to Twitter to say, "These Hollywood elites wouldn't know average, every day hard-working Americans if we bit them in the a**." Another user on the site wrote, "Like all celebrities, #MerylStreep has no right to comment on politics or any other human issue. Rich, out of touch people can shut up." Meghan McCain, who strongly opposed Trump during the election, posted that things like Meryl's speech are "why Trump won," and subsequently retweeted comments from other accounts referring to the actress as "out of touch."

While one would expect Streep's opponents to perhaps repeat Trump's insistence that he was not mocking the reporter for his disability, it's hilarious to see her status as a celebrity be used against her, considering President-elect Trump's pride in his own fame. This is a man who just three months ago was revealed to have used his status to make passes at women. “When you’re a star they let you do it. You can do anything.” Have Streep's detractors forgotten?

Bragging about his ability to draw high television ratings — to the point of refusing to a debate during the Republican primaries to stop making Fox "rich" with his participation — displays an obsession with popularity.

Not only that, but attacking Streep for being wealthy and out of touch is bizarre, considering Trump's frequent habit of boasting about how rich he is. He himself is also amazed by the fact that he represents the working class. “What amazes a lot of people is that I’m sitting in an apartment the likes of which nobody’s ever seen,” he told TIME magazine. “And yet I represent the workers of the world.” He brags about not paying taxes. He's been accused by hundreds of workers for not having paid them for their services. His knowledge about how the economy functions is highly flawed.

Streep's critics are going to need a new argument.

More like this
Camilla Paid Tribute To The Queen In A Heartfelt Video Message
By El Hunt and Sam Ramsden
Here’s Everything You Need To Know About Operation London Bridge
By Bustle UK
Confusion Reigns After Kanye Changes His Instagram Profile Pic To Kris Jenner
By Jake Viswanath
The Try Guys Cheating Scandal, Explained
By Grace Wehniainen
Get Even More From Bustle — Sign Up For The Newsletter