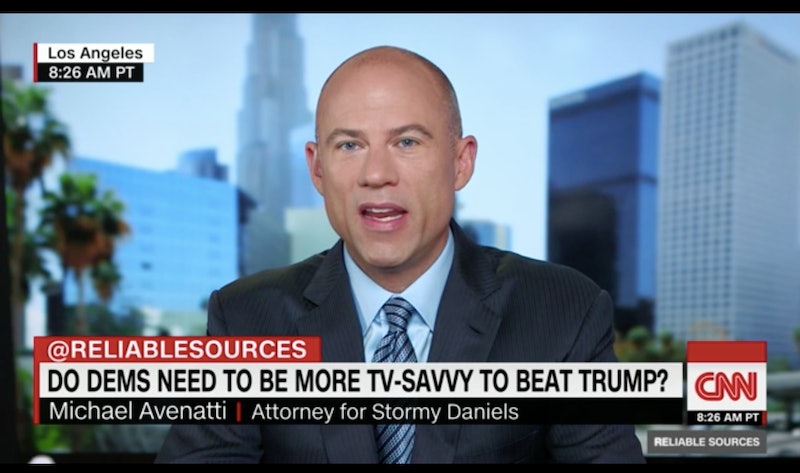 Amidst talk that he is considering a presidential run in 2020, Michael Avenatti had an interview with CNN on Sunday — and actually offered a rare compliment to President Trump. During the interview, Avenatti suggested that Trump has mastered a skill that the lawyer believes is essential to being a successful modern-day president.

On CNN's Reliable Sources, Avenatti told host Brian Stelter that, while he does not believe Trump is fit to lead the United States, the lawyer does think that the president has one skill in particular that helps him garner support. This skill is Trump's ability to navigate the media. As Avenatti noted:

We live in a different media age, a different realm if you will. And whoever is going to aspire to the presidency is going to need to understand what that realm entails and how to navigate it ... And Donald Trump, you can say a lot of negative things about him, and I do, and I think he's completely unprepared for the office and he lacks the fabric to lead this nation, but if there's one thing that he understands, it's branding and how to navigate the media.

Stelter indicated that he concurred that "star power" and "TV savvy" are probably required skills for the job of president — and told Avenatti that he is taking him seriously as a presidential contender because of Avenatti's "presence on cable news." In July of this year, Avenatti suggested that he is considering a presidential bid and has recently given even stronger indications that he is planning to run against Trump in 2020, as Bloomberg reported. Indeed, when Stelter asked Avenatti how serious he is about challenging Trump in two years, the lawyer replied, "I'm very serious, Brian ... People are encouraging me to do it."

Avenatti has received much public attention because of his role as Stephanie Clifford's (otherwise known as Stormy Daniels') lawyer. Avenatti is representing Daniels in her lawsuit against Trump and his former attorney, Michael Cohen. As Bloomberg reported, in the lawsuit Daniels is seeking release from a non-disclosure agreement, which has prohibited her from discussing an alleged affair she had with Trump.

As USA Today reported, Trump has always denied having an affair with Daniels. He also alleged on Twitter in May that the non-disclosure agreement was used to "stop the false and extortionist accusations made by her [Daniels] about an affair." Trump further claimed that " ... money from the [presidential] campaign, or campaign contributions, played no roll in this transaction."

Avenatti has become well-known for his outspoken criticisms of Trump since he took on Daniels' lawsuit. Thus, the lawyer's recent compliment about Trump's media abilities may come as a surprise to some. However, in complimenting Trump, Avenatti is likely touting his abilities as well, indicating that his own savviness with the media is exactly what is needed to counter Trump in 2020. Time will soon tell whether Avenatti intends to take his presidential ambitions to the next level.