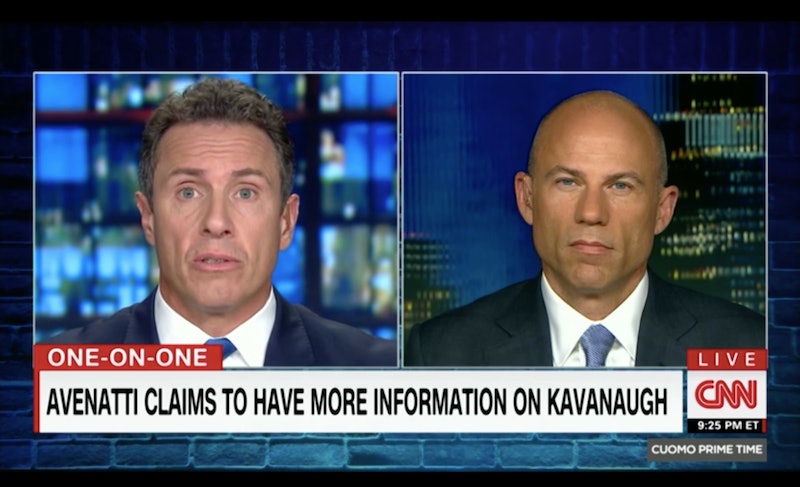 On Cuomo Prime Time on Monday, Michael Avenatti warned Donald Trump and Brett Kavanaugh that a third accuser will soon come forward — and cautioned that they should avoid attacking her in any way. Kavanaugh has previously denied sexual misconduct allegations alluded to by Avenatti, calling them "outrageous." The SCOTUS nominee has also denied two previous sexual misconduct allegations against him. Bustle reached out to the White House for comment regarding Avenatti's claims, but has not yet received a response.

Avenatti suggested that new sexual misconduct allegations against Kavanaugh will be made public within 48 hours, telling host Chris Cuomo, "We're going to make a public disclosure in the next 48 hours of detailed allegations as well as the identity of at least one of my clients." In an interview with Fox News on Monday, Kavanaugh vehemently denied the sexual misconduct allegations to which Avenatti has previously alluded, saying:

During his CNN interview, Avenatti told Cuomo that he considers the accuser who is planning to come forward to be highly credible, particularly because she reportedly possesses a variety of federal security clearances. Avenatti also warned others to not engage in a "smear campaign" against this accuser.

As Avenatti said on Cuomo's show:

So, let this be a warning to Donald Trump, Brett Kavanaugh, and other surrogates, including those on the Senate Judiciary Committee. I will caution you, be very very careful if you launch some smear campaign against my client, because you will be ultimately shown to be a fraud.

Avenatti's warning perhaps comes as a result of Trump (and others) pushing back against Kavanaugh's other accusers. Indeed, on Sept. 21, Trump appeared to downplay the allegations of one of Kavanaugh's accusers, Dr. Christine Blasey Ford. The president wrote:

Ford has accused Kavanaugh of physically and sexually assaulting her at a high school party in the early 1980s, which she detailed in a letter to California Senator Dianne Feinstein in July. Kavanaugh has staunchly denied Ford's allegations, saying (as reported by The Washington Post ), "I categorically and unequivocally deny this allegation. I did not do this back in high school or at any time.”

On Sunday, another woman, Deborah Ramirez, accused Kavanaugh, her Yale University classmate, of sexual misconduct. Ronan Farrow and Jane Mayer of The New Yorker wrote that Ramirez claims that during the 1983-84 school year, Kavanaugh "exposed himself at a drunken dormitory party, thrust his penis in her face, and caused her to touch it without her consent as she pushed him away." Kavanaugh also firmly denied Ramirez's allegations, saying in a statement to The New Yorker, "This alleged event from 35 years ago did not happen. The people who knew me then know that this did not happen, and have said so. This is a smear, plain and simple."

On Monday, CNBC reported that, following Avenatti's assertions that another accuser is imminently coming forward, the Senate Judiciary Committee reached out to Avenatti for further information. The outlet also reported that Avenatti said his client will make these claims public in an interview in the next couple days, though Avenatti does not yet know through which outlet the interview will be conducted. Again, Kavanaugh denies all allegations of sexual misconduct.