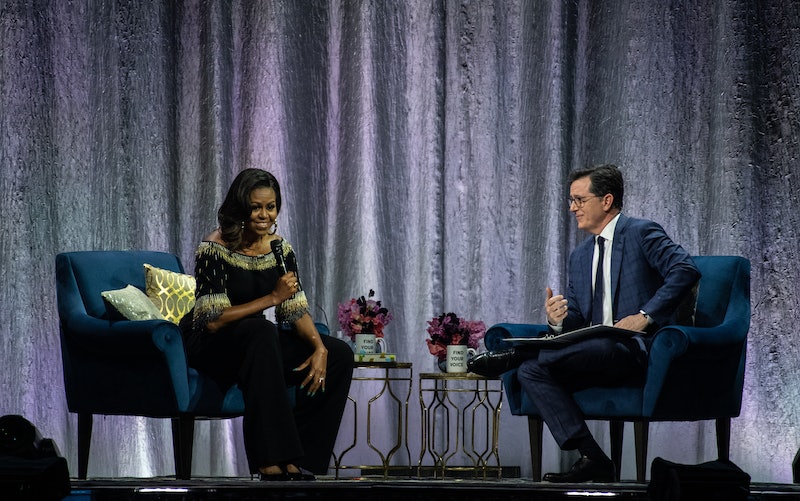 While promoting her book abroad in London over the weekend, Michelle Obama likened Donald Trump to a "divorced dad" who ultimately makes his kids sick in a denunciation of the president's leadership. But although the former first lady made a series of jabs at her husband's successor, she never directly named Trump in her scathing critiques.

"We come from a broken family, we're a teenager, we're a little unsettled," the first lady said of America while speaking Sunday in on-stage interview with Stephen Colbert at the O2 arena in London. "Having good parents is tough. Sometimes you spend weekends with divorced dad — that feels like it's fun but then you get sick. That's what America is going through. We're kind of living with divorced dad right now."

Yet that reportedly wasn't the only Trump-centered criticism the former first lady served up during the event. "Let's just stop and think about — for anybody who had problems with Barack Obama — what we were troubled by," The Guardian reported she said at one point during the evening. "There were never any indictments."

But while America may be going through what Obama called "a dark chapter" right now, she stressed that there is always hope for those willing to show up and work for the change they desire. "It's time for us to roll up our sleeves and if we are not happy with the state of things then, in democracies, we have votes," The Guardian reported she said. "We have to pay attention and we have to be engaged and we can't take our rights and liberties for granted. Because if we don't vote, somebody will."

She went on to characterize the country's current situation as just "one of many chapters."

"It may feel like a dark chapter but any story has its highs and lows, but it continues," the paper reported she said Sunday. "Yeah, we're in a low, but we've been lower." The former first lady claimed America and the world had lived through "tougher times" when there had been even more to fear. "We've lived through slavery and the Holocaust and segregation and we've always come out on the other end, better and stronger," she said.

Of course, not everyone appreciated Obama's divorced dad analogy. On Twitter, a number of users who self-identified as either divorced dads or the co-parent of a divorced dad rebuked the former first lady for playing into negative stereotypes about dad who just so happen to be divorced.

Interestingly, Obama doesn't appear to be the first person to use a divorced dad analogy when describing Trump's presidency. When Trump provided the Clemson Tigers football team with a fast-food buffet, one Twitter user mused that we'd gone from Obama's healthy eating campaign to "divorced dad that lets (sic) you eat lukewarm junk food."