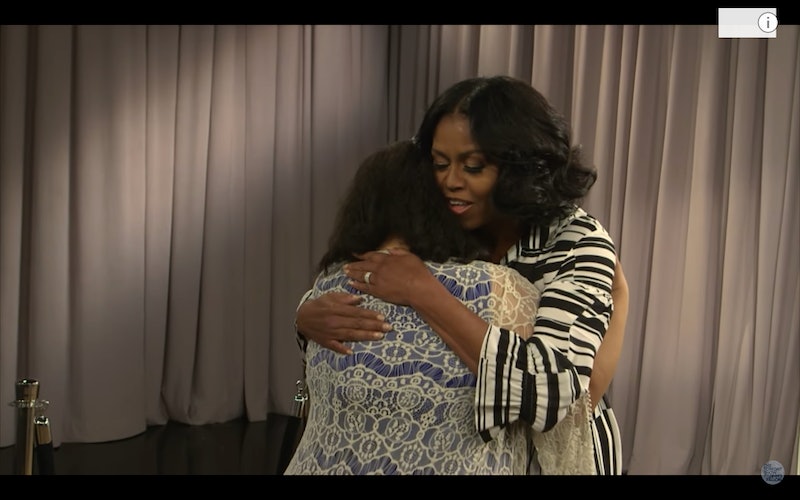 Many people are still emotional about President Obama's final speech as president, but the First Lady has shown that she will encourage Americans until the very end. She may have given her final speech as First Lady last week, but Michelle Obama made an appearance with Jimmy Fallon on the Tonight Show, surprising fans who showed up to record goodbye messages to her.

"Because of you I know that my race does not define who I am or what I can accomplish," one fan said. "For years you have shown our nation countless times that through dignity, compassion, and respect we can overcome any hardship." And it's true. One of the First Lady's most memorable lines from last year was, "When they go low, we go high," an encouragement that referred not just to a mindset, but to how we should act in our daily lives.

And despite the winner of the election not being the candidate she campaigned for, Michelle continued to inspire Americans to make a difference without tearing others down. President-elect Donald Trump's presidency scares many people, especially those from traditionally marginalized backgrounds, but during her final speech as First Lady, Michelle made a point of reminding young people that "they matter, that they belong."

Michelle's message of belonging comes in sharp contrast to some of the divisive rhetoric that has come up in during the presidential campaign. For instance, Vice President-elect Mike Pence has pushed for public policy that curtails reproductive rights, the rights of the LGBTQ community, immigration, the protection of the environment, and more. But while Michelle acknowledged that life may seem scary right now, with her relentless optimism and carefully selected words, during her post-election speeches, Michelle pushed for Americans to not succumb to fear.

One woman thanked Michelle for inspiring confidence. "You have helped me and inspired me to work in my purpose every day," she told the camera, unaware that Michelle was watching her in real-time. "I work to help women and underrepresented students get access to technology, education, and I love this work. And I'm good at this work, and I would love to work for you one day." When Michelle came out from behind the curtain, asking "Really?" the woman burst into happy tears.

Michelle's fans thanked her for everything from her amazing dancing skills, to inspiring their daughters to eat at the school salad bar, to being an amazing teacher. One fan said the reason he lets his daughter (the same one who now eats at the salad bar) stay up late to watch Michelle's speeches is because "is because the thread that runs through [her] speeches is kindness." Michelle's kindness doesn't just come from her speeches — it comes from her everyday interactions with people. No matter how many fans she saw, Michelle reacted to each one with the same genuine kindness.

Michelle will be remembered for many things; being the most academically accomplished First Lady, her willingness to engage the public through social media, and her reminder that diversity matters. She has been one of America's greatest role models, and we've been lucky to have her.