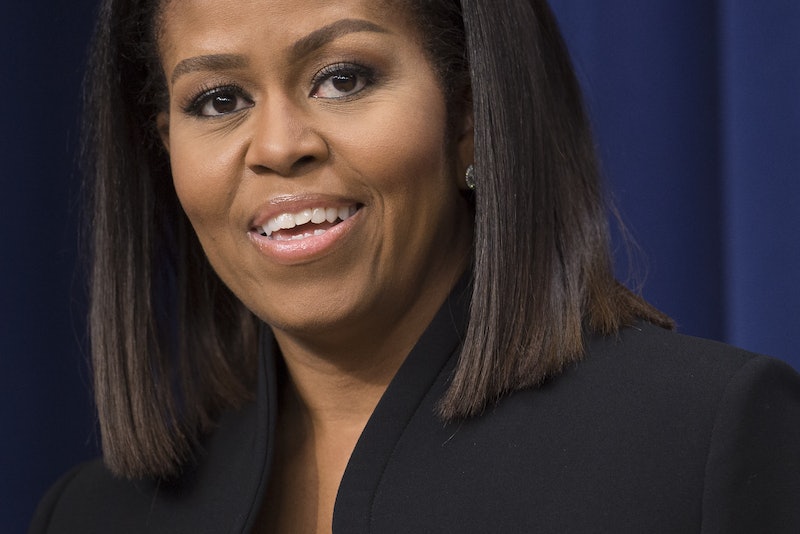 Michelle Obama returned to Jimmy Fallon's The Tonight Show Wednesday to say goodbye not just to Fallon, but to the whole country. This is the week of farewells from the Obamas. Last Friday Michelle gave her final speech, and then of course, President Obama gave his farewell speech in Chicago on Tuesday. But there was something more personal about Michelle's full-episode appearance on the late-night show; you really felt her emotion. Once again on The Tonight Show, Michelle Obama shared a message that every kid should hear.

It came up when Fallon asked her about the emotions she's feeling as her family gets ready to leave the White House. "I feel like crying right now," Obama told Fallon. "I didn't think it was gonna be that emotional, because it's like, we're ready, we're good. It's been eight years; eight years is enough. We're packed up." But there have been emotions after all — including at Michelle's final speech on Friday. Fallon asked her why. "Talking about kids," Obama responded. "Kids are my heart." Then she went on to share an important message:

When I think about the fact that some of them are afraid of the future, of what is to come, I don’t want them to be afraid. I want them to embrace the future and know that the world is getting better. We have bumps in the road. We have ups and downs but I want our kids to move forward — I don’t care where they come from — with strength and with hope.

This was very similar to the message she shared in her last speech. She was speaking Friday at an event to honor the School Counselor of the Year, Terri Tchorzynski. Her speech looked back at her time in Washington, but it also focused on the message that children should not be scared of the future. "Don't be afraid, you hear me?" Obama told the crowd, asking young people to be "determined" and "empowered" and to "lead by example with hope."

As for her own kids, Obama talked about their reaction to her husband's farewell Tuesday. Malia was there crying, but Sasha didn't go to Chicago. She had a final the next morning. "You know the Obamas. Girl, sorry, you better take your test. You can say goodbye later," Obama explained. Fallon commended that decision as an example of Sasha being a good student, but also the Obamas being good parents.

Starting Jan. 20, Michelle will no longer be the first lady, but that doesn't mean we can't look to her to inspire the nation's young people. She's promised to remain an advocate, and after her husband leaves office, we're likely to hear more vital messages from her on children and a host of other issues.