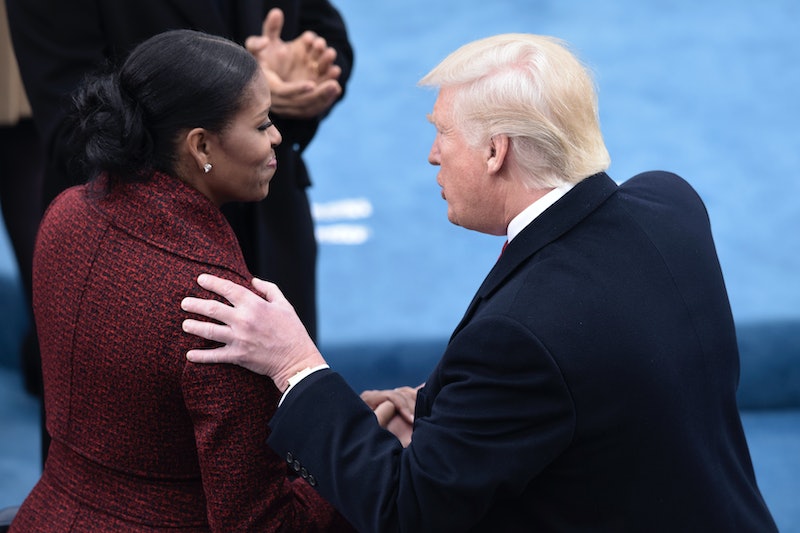 Donald Trump was sworn in as the 45th president of the United States on Friday and for many people, outgoing First Lady Michelle Obama's facial expressions at Trump's inauguration were the only thing worth watching. As Trump took his oath of office and delivered his inaugural address, cameras caught the outgoing first lady looking less than impressed, a state of mind many on social media claimed to identify with. In fact, for many Twitter users, the outgoing first lady's facial expressions served as the perfect representation of their foreboding sense of dread regarding a Trump presidency.

While the outgoing first lady never broke from protocol, her facial expressions didn't go unnoticed by those watching the inauguration. As Trump was sworn into office, marking the official end of President Barack Obama's eight-year presidency, Michelle Obama was caught on camera standing behind her husband with her eyebrows drawn together in an expression many Twitter users claimed conveyed the same sense of impending doom they were feeling.

"Michelle Obama is all of us right now," one Twitter user wrote.

But it wasn't just how the outgoing first lady appeared to react to Trump's swearing in that left Twitter talking. Michelle Obama served up more than a few candid facial expressions throughout the day's events.

From the awkward moment that ensued after incoming First Lady Melania Trump surprised her with a gift on the White House steps to the multiple side eye glances she kept giving the camera, outgoing First Lady Michelle Obama let her face do the talking throughout Trump's inauguration.

"I love women who keep it real," two-time U.S. Olympic gold medalist Hope Solo tweeted along with a picture of Michelle Obama taken during Trump's inauguration at the Capitol.

If you missed Trump's inauguration (and thus all of Michelle Obama's candid realness), fear not. Thanks to the magic of the internet, every one of the outgoing first lady's subtly solemn frowns, awkward grimaces, and side eyes has been immortalized in GIFs and screenshots.

The truth is, it's impossible to know if the outgoing first lady's dour facial expressions were the result of the rain that started up during Trump's inaugural address, an impatience to get on with her life as a civilian, or a general sense of impending doom now that a controversial businessman and former reality TV star who has vowed to undo much of the work her husband did has been sworn in as the nation's next president. Whatever was behind them, Michelle Obama's facial expressions at Trump's inauguration appeared to serve as the perfect representation of the dread so many Americans were feeling.