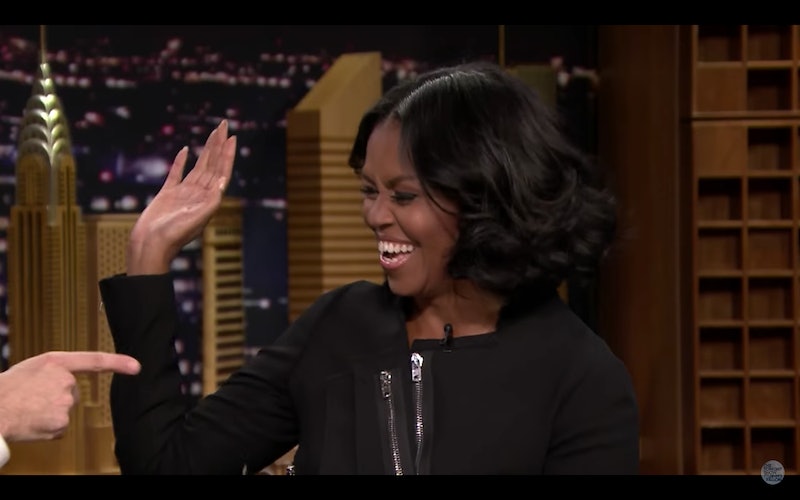 It's not the first time the First Lady has appeared on The Tonight Show, but Michelle Obama's Jan. 11 appearance with Jimmy Fallon was special since it was her last time on the show as First Lady. Many of us cried during President Obama's last address, including the president himself, and Fallon, who admitted to crying on his wife's shoulder. And during her own last address as First Lady, Michelle teared up as well. "I didn't think it was going to be that emotional," she told Fallon. "It's been surprisingly emotional for all of us in ways that we didn't expect."

Michelle has frequently appeared on Fallon's show to promote her initiatives, so it makes sense that she would visit one last time before her husband leaves office. During one segment on Wednesday night, Michelle surprised fans who were recording farewell messages to her by coming out from behind a curtain. While it was touching to see people burst into happy tears upon seeing her, it was even more inspiring to hear people thank Michelle for what she's done as First Lady, including everything from promoting diversity, to inspiring daughters to eat salad, to being an amazing teacher.

But just because the Obamas are leaving the White House, it doesn't mean we won't be seeing much of Michelle anymore. The First Lady told Fallon she would like to stay involved with her initiatives for the rest of her life. Michelle specifically referred to her school lunch initiative, which she said "makes sense."

Michelle says she wants to continue to promote optimism and hope for the future, despite her fears and those of many young people around the country. She told Fallon that she doesn't want young people to be afraid. "I want them to embrace the future and know that the world is getting better," Michelle said. "We have bumps in the road, we have ups and downs. But I want our kids to move forward — I don't care where they come from — with strength and hope."

Michelle's statement carried another important message: that regardless of place of origin, we all belong, and we all matter, an idea the First Lady touched upon in her farewell address last Friday. "Our diversities of faiths and colors and creeds — that is not a threat to who we are," she said during the speech. "It makes us who we are."

As if Michelle's love for young Americans wasn't touching enough, Stevie Wonder appeared on the show, dedicating performances of his songs "Isn't She Lovely" and "My Cherie Amour" to Michelle.

The First Lady also had something to say to her own "amour." "Thank you, Barack, for proving you're not a lame duck, but my very own silver fox," she said, during the recurring "Thank You Notes" segment.

Michelle's words for Barack are even more touching when recalling his words about her during his own final presidential address. "You made the White House a place that belongs to everybody, and a new generation sets its sights higher because it has you as a role model," Barack said. "You have made me proud and you have made the country prouder."

Hopefully Michelle will stay in the public eye and return to The Tonight Show to promote further initiatives. Either way, the First Lady will be missed.