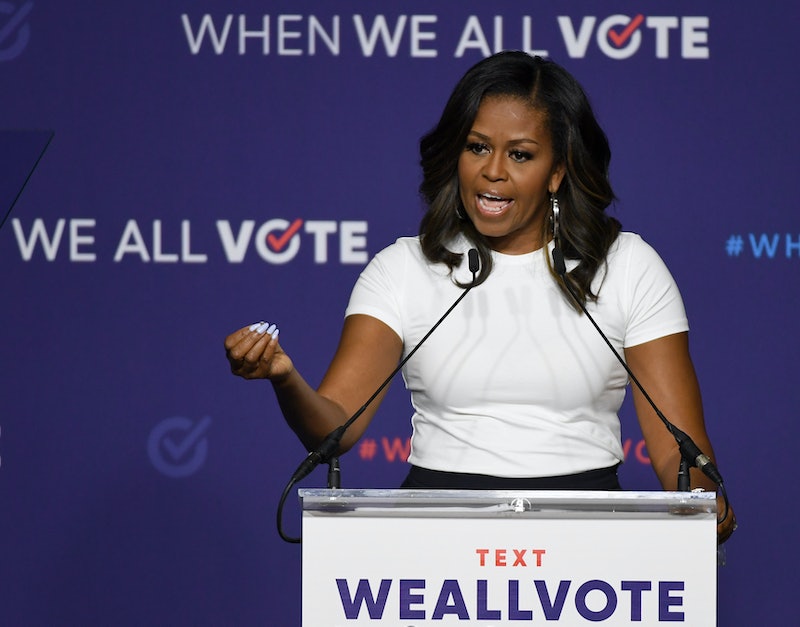 On Sunday, former first lady Michelle Obama held a voting rally in Las Vegas where she emphasized how crucial it is to cast your ballot — even if you're really frustrated with American politics. Obama's Vegas rally marked the kickoff event for a national week of action for her "When We All Vote" campaign, which encourages Americans to vote and to hold voter registration drives, among other initiatives.

During her speech on Sunday, which took place at Vegas' Chaparral High School, Obama acknowledged that, when you're "frustrated" with politics, as many Americans currently are, it is natural to want to avoid engaging with the political system. However, the former first lady stressed that this attitude will not effect the change that many wish to see. As she told the crowd on Sunday:

Believe me, I am frustrated, too. I am sick of all the chaos and the nastiness of our politics. It’s exhausting, and frankly it’s depressing, so I understanding wanting to shut it all out. … But here's the problem: While some folks are frustrated and tuned out and staying home on Election Day, trust me, other folks are showing up. Democracy continues with or without you. They're voting in every election, from city council to governor to president, because the folks who are voting know the impact that the leaders that they pick can have on every single part of our lives.

The former first lady also emphasized that while she sympathizes with being fed up with politics, choosing not to vote means that you are "essentially putting your future in the hands of others." She added, "That's exactly what some folks are hoping that you'll do. They're hoping that you'll just let them make these important decisions for you."

Obama then stressed that voter suppression is very much a problem in the United States — and is something against which Americans need to actively push back. As Obama put it:

They're finding all kinds of ways to keep you at home, hoping that when you hear about all those things [barriers to voting], you'll just give up. And just think that voting is just too hard, that it'll take hours of your time, that it requires some special skills and expertise that you just don't have. That's what they want.

Toward the end of her speech, Obama emphasized that, despite the frustrations of politics and the problem of voter suppression, voting is something that must be prioritized. She also noted that registering to vote — and voting itself — is a relatively straightforward and quick process, adding that, in the 2016 elections, Americans waited in line at the polls for an average of 11 minutes.

The former first lady concluded her speech by emphatically asserting that, when people show up to vote, that's "how change happens in America." Indeed, in her role as co-chairwoman of the "When We All Vote" campaign, Obama is working hard to help ensure that all Americans' voices are heard via the ballot box. Her organization will be traveling the country to register voters this week in hopes of helping encourage voter enthusiasm for November's midterm elections.