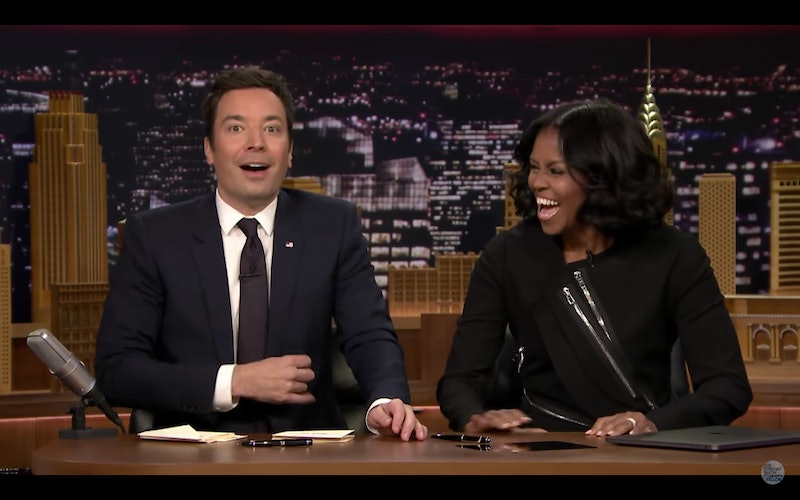 On Wednesday's The Tonight Show Starring Jimmy Fallon, special guest and outgoing First Lady Michelle Obama wrote "Thank You" notes as part of a recurring segment of the show. Obama's "Thank You" note to her husband, Barack, was the first of several notes she wrote on the show, and served as another adorable example of the genuine love the Obamas have for each other — the same love that so many of us have come to admire.

In her note to the president, Michelle wrote "Thank you, Barack, for proving you're not a lame duck, but my very own silver fox." The First Lady then smiled sheepishly after writing the note and planted a quick kiss on it. She also jokingly said that she was "angling for a good gift" after writing the note.

Michelle's written thank you note to Barack was not the only time she referenced her husband in the segment. When Fallon flashed a picture of her husband on the screen, Obama commented "That's my boo — mom jeans and all," in a joking reference to the outgoing President's penchant for high waisted jeans.

Michelle's sincere "Thank You" note to Barack, coupled with her lighthearted teasing of him, epitomize exactly why so many people have come to love and admire the couple's relationship over the past eight years.

Indeed, Michelle's note to her husband comes on the heels of another very heartwarming display of the Obamas' love that took place on Tuesday evening, this time with the outgoing president expressing his love for his wife. In his farewell speech to cap off his presidency, Barack Obama lovingly paid tribute to Michelle, calling her his "best friend" and praising the "grace ... grit ... style and good humor" she brought to her role as First Lady. The President teared up while talking about his wife, once again reflecting the depth of love and admiration the couple seem to have for each other.

Of course, Michelle sent her own sweet message back to Barack following his farewell speech. On her Twitter account, she posted a photo of herself, Barack, and a very young Sasha and Malia at the beginning of Barack's presidency eight years ago. The photo was captioned with the message, "So proud of @POTUS and all that we've accomplished together. An incredible journey filled with remarkable people. I love you Barack."

Michelle's appearance on The Tonight Show tonight capped off a week of heartfelt and sweet expressions of love between the Obamas that have helped provide some levity and hope in rather trying times. It was perpetually inspiring and comforting to watch the Obamas' interactions over the years as they navigated Barack's presidency, and it will wonderful to see them create their post-presidency path together, as they seem to epitomize what it means to love each other.

More like this
'RHOSLC’s Newest Cast Member Has Tried To Become A Housewife Before
By Jake Viswanath
Who Is Nick Cannon Dating & How Many Kids Does He Have?
By Jordyn Tilchen and Radhika Menon
Khloé Kardashian Is Reportedly Dating A Private Equity Investor She Met Through Kim
By Jordyn Tilchen and Jake Viswanath
The 'Bachelor In Paradise' Schedule Shifts To 4 Hours Every Week After The Season 8 Premiere
By Brad Witter
Get Even More From Bustle — Sign Up For The Newsletter