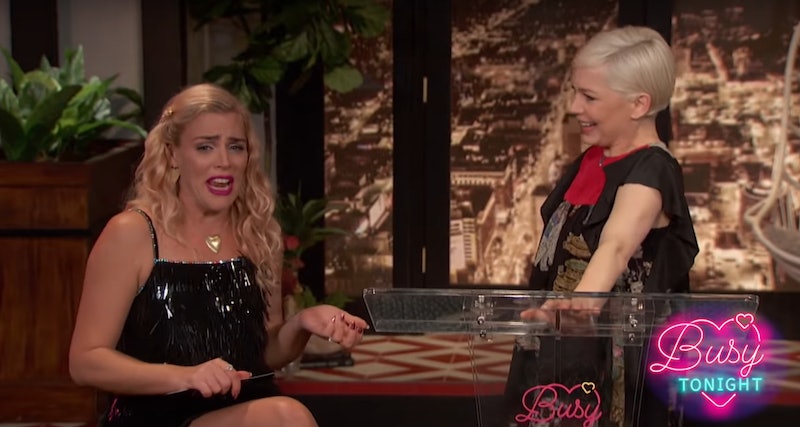 All good things must come to an end, right? Such was the case with Busy Tonight, which aired its final episode on May 16. Host Busy Philipps invited several of her famous friends to "roast and toast" her in honor of the show, including Michelle Williams, who skipped her daughter's school play to be on the Busy Tonight finale, as Us Weekly reported. Don't worry, though — Williams made sure to get permission from her daughter first.

So, if you haven't watched the last episode yet, you should probably make sure that you have a box of tissues near by before you do so. Yes, it's that emotional. There were a lot of tears — not just from Philipps, but almost all of her guests cried too.

One moment that brought on a lot of feels, in particular, was the roast and toast segment. All of the guests — Christa Miller, Jennifer Carpenter, Linda Cardellini, Whitney Cummings, and Williams — delivered sweetly sincere and funny, short speeches about Philipps and her show, but Williams' made a pretty memorable point.

After walking up to the podium, Williams dramatically ripped up her cue card and just decided to wing it. "So, as I was leaving to come here," she started to say before visibly tearing up and exclaiming, "Shoot!"

She then managed to kind of, sort of get it together (you could totally still see the tears welling up in her eyes, though), and explained, "Tonight is actually Opening Night of my daughter's school play. And when I said to her, 'Listen, Aunt Biz needs me. Are you cool if I just come to the middle and the ending?' She was like, 'Mom, absolutely. Get on that plane, of course.'"

The camera quickly panned over to Philipps to capture her reaction, and she was basically doing everything she could not to just absolutely lose it. "And then she said to me," Williams continued, referencing her 13-year-old daughter, Matilda, "'Why are you guys such good friends? You're so different.'" At this point, Philipps laughed, but it was definitely like, a combination laugh-cry.

"You're just always there," Williams added. "And I don't know how you do it, because you look like you're living a really fabulous life for yourself — but the truth is, you show up for all of us all of the time. And you are the most selfless person that I know, and it's taught me everything I know about being a friend."

So many feels, right? The whole thing was a really touching tribute to Philipps, as well as to all of the woman that came together to work on and create her show. It's a bummer that it had to come to an end, but it was good while it lasted. And hey — there's still a chance that Busy Tonight might be able to find a new home at another network, so keep your fingers crossed that perhaps this will turn out to be a hiatus instead of a permanent conclusion.

More like this
Confusion Reigns After Kanye Changes His Instagram Profile Pic To Kris Jenner
By Jake Viswanath
Everything To Know About Taylor Swift’s 10th Studio Album, 'Midnights'
By Grace Wehniainen and Jake Viswanath
Is Dua Lipa Dating Trevor Noah? New Photos Show Them Kissing & Hugging
By Brian Anthony Hernandez and Martha Sorren
Kylie Jenner Goes Into Labor & Welcomes Her Baby On 'The Kardashians'
By Jake Viswanath
Get Even More From Bustle — Sign Up For The Newsletter