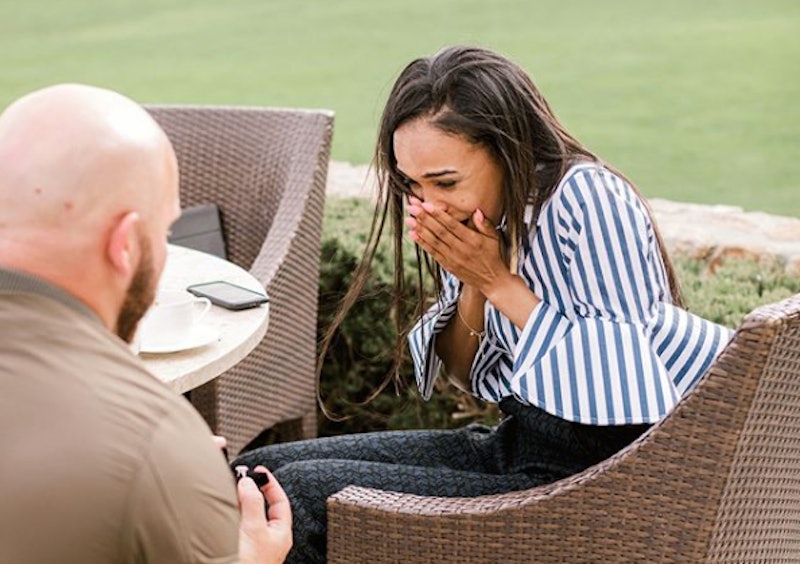 Former Destiny's Child singer Michelle Williams is officially engaged, and you will lose your breathe when you see the ring. The story behind it is even better than the look, if you can believe it. According to People Style, Michelle William' fiancé saved 11 years for her engagement ring — even though they've only been together for one year. Now that's dedication.

According to Williams' Instagram post, pastor Chad Johnson proposed to her on March 21 and she said, "Yesssssssss.....I will, I will, I will!!!” The ring that solidified the deal was a whopping 5-carat rock that he had been saving up for eleven years.

“On my 30 birthday, everybody came and celebrated me. The next day, I woke up alone. I was so lonely. I had a little pity party. My personal life was lacking so much, and I was living so single,” Johnson tell People Style. “So as a response to that moment, I opened up a ring account, and for 11 years, I put $150 into a ring account.”

Every month, Johnson put the $150 in a "ring account," not knowing whether he would use it in a year, two years, or even a decade. Apparently, it paid off — literally — because this ring is stunning, and Williams' reaction was epic. She and her fiancé posted photos of the exact moment that Johnson popped the question on their Instagram accounts.

It's not every day that you hear about someone saving over a decade for a ring for a partner that they don't have. But Johnson said that it was a way to remind himself that his wife would someday come.

“When I had the moment that I knew Michelle was it, I was so excited to get that money and go buy that ring,” he tells People Style. “There’s so much in that ring. That’s 11 years of my belief in my wife coming for me.”

If the calculations are correct, Johnson spent roughly $20,000 on the engagement ring if her only spent the savings. According to the publication, the five carat ring was from L.A. jeweler Denis Mahgerefteh. The gorgeous, cushion shaped diamond is surrounded by tons of little diamonds as is the band of the ring. Needless to say, it was well worth the 11 year wait.

Eleven years is a little longer than the average amount of time to spend saving up for a ring. There have been a bunch of silly rules about what the proper amount to save up is, ranging from one month to six months of pay. Obviously, there is no exact real wrong or right answer here. As The Knot notes, the proper time to save is dependent on financial situation, partner's expectations, and meaningfulness of the ring.

“I saw this ring in February — a friend of mine is a wedding planner from London, and I just saw this ring, and it stood out to me! And I took a screenshot of it like, ‘God, I would really like something like this.’ But how do you tell your man to make sure he gets the right ring?” Williams tells People Style.

According to the publication, he did pretty darn well. Williams says that the five-carat ring was almost identical to the one that she screen-shotted earlier in the year. I guess great minds, er, soulmates think alike.

Get your savings account ready. If there's a lesson that we can learn from Johnson, it's that it's better to be prepared for the special moment than to have to stress over funds.