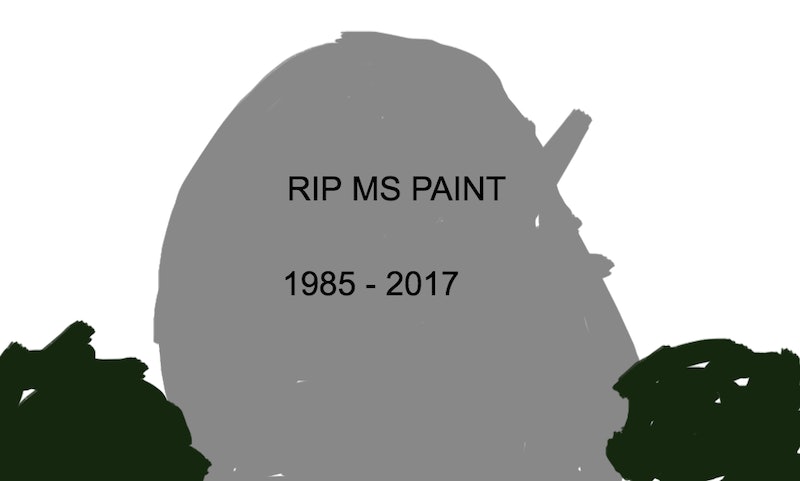 Dearly beloved, we are gathered here today in the glare of this computer/mobile device screen and in the face of this company to pay our final tribute and infinite respect for our friend, our comrade, and the source of those horrific stick figure families we made during our third grade typing classes, Microsoft Paint. At the ripe age of 32 years old, M.S. paint has been discontinued by Microsoft, to became nothing but a sweet, sweet memory in the fabric of our '90s babies brains.

Fear not for M.S. paint and for the unknowable road it travels now, for it does not travel them alone; beside it in that veil beyond your old desktop computer that for some reason your parents never unplugged from their study are other fallen comrades from the '90s. The ripped off tags from the Beanie Babies you never sold; the hair you had to cut off after dyeing the tips of it too aggressively with pink Kool-Aid; that album insert from the Britney Spears CD you lost at school when you were arguing over the actual words of "Oops! I Did it Again" and you needed to shut Jenny TF down. M.S. Paint may be returning to the darkness from which we all emerged at birth, but it returns in good company.

Now is as good of a time as any to remind ourselves that after death, there is life; after sorrow, there is hope. For although Microsoft has declared its intentions to do away with Microsoft Paint in the latest Window 10 update, aptly named "Fall," M.S. Paint will leave a legacy behind — in fact, it already has. Paint 3D launched as part of the Creators Update this past April, as Robin stepped in for Batman; for all heroes must fall, and all legacies are unwinding. But alas, Paint 3D will only offer extremely basic two-dimensional drawing, operating mostly for the sake of three-dimensional art. To quote Bob Dylan, "The times, they are a-changin'."

In the meantime, everyone, take your Otter Pops and your Hi-Cs and pour one out for M.S. Paint — the true rainy day recess hero, the unlocking of what turned out to be your fairly limited artistic potential as a child, and the now forever prison of all those photos of stick figure families with speech bubbles that said "BUTTS!!!" on them. May they all rest in peace.

More like this
A New 'And Just Like That' Table Read Pic Confirms A Key Character's Return
By Jack Irvin and Grace Wehniainen
Netflix Reveals First Look At Wednesday In The 'Addams Family' Spinoff Series
By Bustle Editors
How To Turn Off Night Mode On Your iPhone Camera
By Emma Carey
Behind The Hilarity Of The "POV: You Walk Into My Room" TikTok Trend
By Lexi Inks
Get Even More From Bustle — Sign Up For The Newsletter