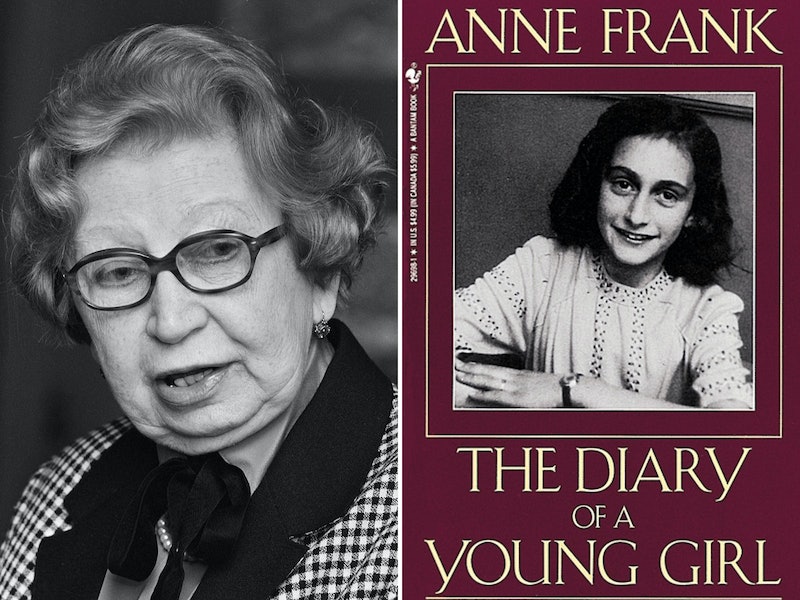 A new anthology, The World is Just a Book Away, published by the University of Southern California Libraries on Nov. 9, chronicles the stories of how books and reading inspired some of the world’s most influential people — and the book is doing a little world-changing of its own too. The anthology gathers together the personal, book-loving stories of 60 public figures: Noble Peace Prize Laureates, actors, activists, global leaders, scientists, royalty, and more. Edited by USC professor James Owens, the collection is a labor of love that took him 15 years to compile — and the personal essays inside span that time frame.

One particularly moving entry comes courtesy of the late Miep Gies — one of the Dutch citizens who hid Anne Frank, her family, and four other Jews from the Nazis during World War II, and was responsible for the recovery of Anne Frank’s diary. Gies, who gave Owens permission to reprint the essay — an excerpt from her memoir Anne Frank Remembered — in 2009 and died in 2010, wrote about the experience of reading The Diary of a Young Girl by Anne Frank, which she couldn’t bring herself to do until well after the second edition of the diary was published. “I read the whole diary without stopping,” she wrote in the essay for the anthology. “From the first word, I heard Anne’s voice come back to speak to me from where she had gone. I lost track of time, Anne’s voice tumbled out of the book, so full of life, moods, curiosity, feelings. She was no longer gone and destroyed. She was alive again in my mind.”

In another essay from the collection, the Dalai Lama — one of the most globally-recognized figures featured — describes his own experience of learning to read around seven years old, going on to explain that at age 81 (at the time of his writing, in 2016) his love of books has never wavered. “As a Buddhist monk, my main education — as well as the majority of the books I have read — have been concerned with Buddhist thought and practice," he writes. "The primary object of the Buddha’s teachings is to enable people to transform their minds, which can only be effectively achieved if the instructions are conveyed in a language that the reader can understand.”

He also tackles an issue that has been making headlines with increasing frequency around the world lately: freedom of speech. “There is so much talk about the right to freedom of speech, but much less about the right to freedom to read, perhaps because we take it so much for granted. For hundreds of years, reading and access to books have been fundamental to extending our knowledge and education. Reading books allows us to learn more about the world in which we live, but also more about the people we share it with, the way they think and the experiences they have.”

"Reading books allows us to learn more about the world in which we live, but also more about the people we share it with, the way they think and the experiences they have."

Another world-changing figure who shares her story in The World is Just a Book Away is the British primatologist, ethologist, anthropologist, and UN Messenger of Peace Jane Goodall, who wrote the forward for the collection, and whose personal essay cites The Story of Dr. Doolittle by Hugh Lofting, Tarzan of the Apes by Edgar Rice Burroughs, Silent Spring by Rachel Carson, as well as the Bible, Shakespeare, and John Keats as literary influences in her life. “I like the look of books, I like the feel of books, and I like the smell of books. I simply cannot imagine a world without them, because they take me into other worlds. They are sources of knowledge, of comfort, of inspiration, and perhaps most importantly, they are sources of hope,” she writes.

Other notable figures include actor Susan Sarandon, who describes her connection to Dead Man Walking by Sister Helen Prejean; South African anti-apartheid and social rights activist Desmond Tutu, who writes about reading Aesop’s Fables by Aesop, Tales from Shakespeare by Charles Lamb and Mary Lamb, and Sub-Mariner and Lone Ranger comic books as a child; actor Jude Law, who describes the way Animal Farm by George Orwell transformed his reading as a child, and The Hobbit by J. R. R. Tolkien has transformed the world of books for his own son today; and Iranian lawyer and human rights activist Shirin Ebadi, who cites being inspired by the memoir It’s Not About the Bike: My Journey Back to Life by Lance Armstrong.

But telling stories of book-inspired lives isn’t all The World is Just A Book Away does. Throughout the course of compiling the collection, Owens recognized the lack of access to books suffered by children living all over the world, and decided to do something about it.

During a 2008 trip to Indonesia, which was then suffering the world’s worst mudflow disaster, Owens discovered that none of the schools in the area had libraries. That’s when The World is Just a Book Away the book became the The World is Just a Book Away (WIJABA) charity. In the 9 years since WIJABA transformed from essay collection to charity, the organization has built 90 standing libraries worldwide, in addition to utilizing mobile libraries to serve an additional 100 schools — bringing books to over 70,000 children around the world, who wouldn’t otherwise have access to them. That’s a mission that every book-lover can get behind.

The World Is Just A Book Away edited by James J. Owens, $30, Amazon