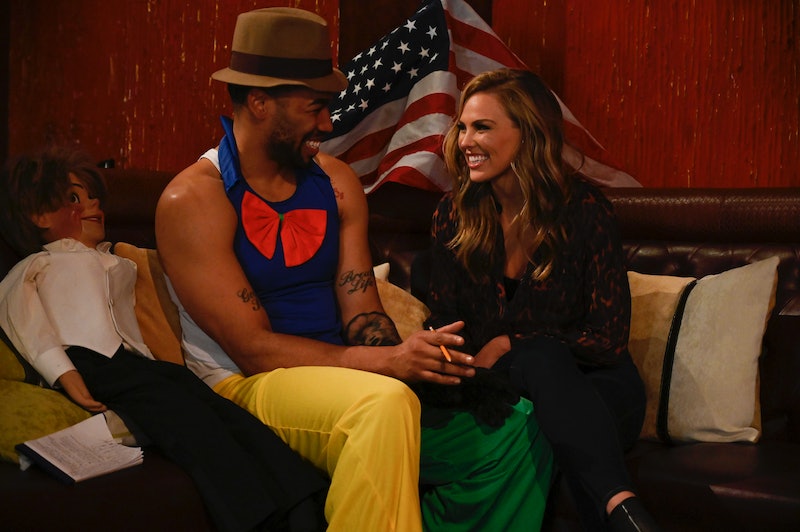 On last week's episode of The Bachelorette, Cam made it clear that he'll stop at nothing to make sure he has Hannah's attention, and on Monday night, that attitude continued to cause drama. During some one-on-one time on a group date (one Cam was actually invited to), Mike discussed experiencing a miscarriage with his then-girlfriend. And even though it led to a really meaningful moment with Hannah, it was all ruined when Cam interrupted them.

It all started during a group date, during which the men were hooked up to a machine that allowed them to experience what contractions feel like when a woman is in labor. It was definitely a funny date (especially for Hannah, who got to watch them all writhing in pain), and some of the guys admitted that it gave them a better appreciation of what their own mothers went through with them. But for Mike, it went deeper than that — it reminded him of a really dark time in his life.

When Mike and Hannah had the chance to sit down and chat one-on-one during the date, he opened up to her about his last relationship, and how he was ready to propose to the woman he was dating. She was pregnant, and he was excited about the idea of becoming a dad, but then she miscarried in the second trimester. Shortly afterward, their relationship came to an end.

It seemed to be a truly difficult experience for Mike, and it was easy to see how much it impacted him and his life just from the way he spoke about it. Hannah was totally supportive of him, and things got emotional, but the moment came crashing down when Cam decided it was time for their chat to be over.

More than once, Cam came in to interrupt them, insisting that he had something important to talk to Hannah about — and that in turn made Mike feel like Cam believed that what he was talking to her about wasn't important. Things got incredibly awkward, especially since Hannah kept trying to politely hint to him that he needed to leave the room.

The other guys weren't impressed by Cam's behavior either, and Jonathan even confronted him about it, refusing to give up any of his own time with Hannah for him. It wasn't just the men, though — fans also picked up on how inappropriate Cam was being.

When Cam did get to talk to Hannah, he filled her in on what was so important: he quit his job to go on the show in pursuit of her.

But despite Cam's best efforts, he did not get the date rose — that went to Mike. "Bold can be shown in many different ways, and you showed another way to be bold tonight," Hannah told him, seemingly hinting that the way Cam tried to get her attention wasn't cool.

Mike was brave to share such a personal story, and it seems like it really helped Hannah get to know him better. As for Cam? Well, his constant interrupting totally backfired, and Hannah sent him packing.