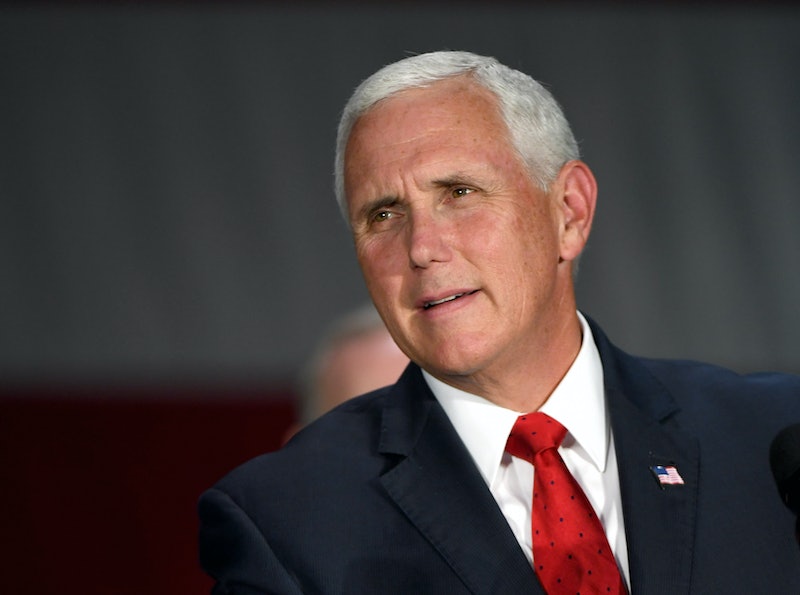 Former President Barack Obama is back from retirement and came out swinging against President Trump over the weekend — much to one current official's chagrin. Vice President Mike Pence criticized Obama for breaking "tradition" and being "political" in the run-up to the 2018 midterms in an interview on Fox News Sunday. In Pence's eyes the whole thing is "very disappointing."

The tradition that Pence speaks of is not anything set in stone or required by the Constitution, but the last several presidents have stayed out of domestic politics — at least initially. It's something Obama himself seemed poised to do upon leaving office, though staying completely out of the political realm for any past president is rarely the case.

Obama's apolitical stint, though, officially ended on Friday when he spoke unfavorably about Trump in a speech at the University of Illinois.

It was very disappointing to see President Obama break with the tradition of former presidents and become so political and roll out the same tired arguments that he and liberals have made over the last eight years.

The truth is the American people in 2016 rejected the policy and direction of Barack Obama when they elected President Donald Trump.

Republicans often point to President George W. Bush as the example of how a president can retire and not speak badly of their successor. He refused to speak ill during Obama's eight years in office.

"It's a hard job. He's got plenty on his agenda. It's difficult. A former president doesn't need to make it any harder. Other presidents have taken different decisions; that's mine," Bush told CNN in 2013, acknowledging that not every president has done so.

"I don't think it's good for the country to have a former president undermine a current president; I think it's bad for the presidency for that matter," Bush said on Fox News' Hannity in 2014.

Whether it's truly a tradition is up for debate — there are several examples of presidents not staying out of politics, namely John Quincy Adams who was later elected to the House, Theodore Roosevelt who ran for a third, non-consecutive term, William Howard Taft who served as the chief justice of the Supreme Court.

In any case, even Bush didn't hold back from criticizing Trump just months into his presidency. In February 2017, Bush told Matt Lauer on Today that he thought Trump calling the media the "opposition party" was a mistake.

"We need an independent media to hold people like me to account. Power can be very addictive and it can be corrosive, and it’s important for the media to call to account people who abuse their power," Bush said on NBC. "I consider the media to be indispensable to democracy."

"It’s always tempting for politicians for their own gain and for people in power to try to see if they can divide people, scapegoat folks, turn them on each other, because when that happens you get gridlock and government doesn’t work and people get cynical and decide to not participate," Obama said in the Friday speech.

"That, unfortunately, has been a spiral we’ve been on for the last couple of years," Obama went on to say. "If we don’t step up, things can get worse."

This is not the first time Obama's role has been discussed. Some have argued that Obama would need to stay apolitical to become more popular in in the longterm, whereas others have called on him to pull more punches in the age of Trump.