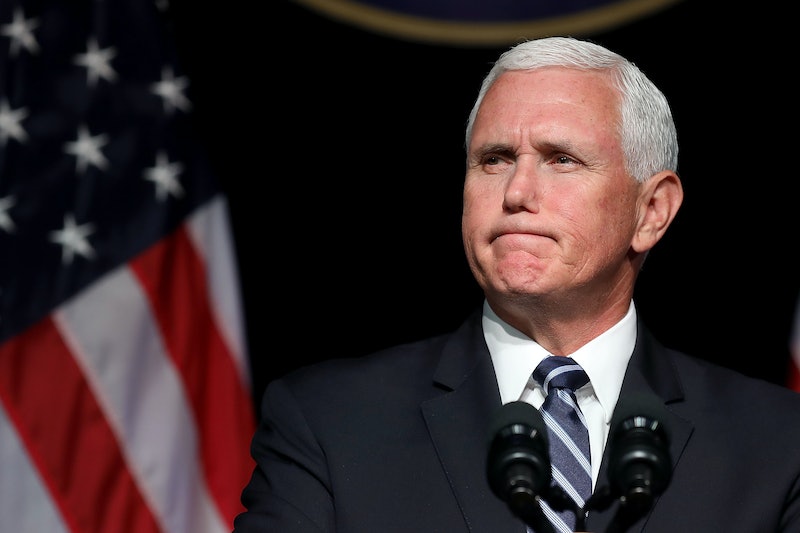 No matter what you may have heard, the vice president has something that he wants you to know: he did not pen that anonymous op-ed in the New York Times claiming that there's a resistance movement going on inside the Trump White House. In fact, in a segment on Fox News Sunday, Mike Pence said he'd take a lie detector test to prove that he didn't write the op-ed.

To have an individual who took that oath ― literally say that they work every day to frustrate the president advancing the agenda he was elected to advance ― is undemocratic. It’s not just deceitful, but it’s really an assault on our democracy. And that person should do the honorable thing, step forward and resign.

This isn't just an idle exercise on the vice president's behalf, either. In the wild speculation following the publication of the anonymous op-ed, there was much discussion on the theory that the author could have actually been Pence.

More than 50,000 people tweeted about the possibility of Pence having written the op-ed because it used the word "lodestar," an uncommon word that Pence has used fairly frequently in the past, the BBC wrote. In his segment on Fox News Sunday, Pence addressed another element of that discussion — that the author of the text might have tried to put the blame on Pence by using the word "lodestar."

Immediately after the op-ed came out, Pence's spokesperson released a statement on Twitter, saying, "The Vice President puts his name on his Op-Eds."

"The @nytimes should be ashamed and so should the person who wrote the false, illogical, and gutless op-ed. Our office is above such amateur acts," the rest of the statement read.

And since the vice president issued his first denial, some Twitter sleuths discovered another Trump administration official using the offending word. In Bob Woodward's forthcoming book on the Trump administration, Trump Secretary of Commerce Wilbur Ross reportedly used "lodestar." Ross, for what it's worth, also denied having written the piece, saying in a Thursday tweet that he "did not write and [is] thoroughly appalled by this op-ed."

None of these pieces of evidence is conclusive, though, especially considering Axios' report, which quoted an anonymous administration official as saying, "To cover my tracks, I usually pay attention to other staffers' idioms and use that in my background quotes. That throws the scent off me."

Pence's offer to take a lie detector test might not offer a conclusive answer, either. According to the American Psychological Association, lie detector tests are notoriously unreliable, because there's no single physiological response that indicates that a subject is lying. A liar could learn to lie while keeping their heart rate low so they appear calmer.

But, the White House reportedly considered using lie detector tests to figure out who wrote the op-ed, according to The New York Times, so who knows? Maybe President Trump will take Pence up on his offer.