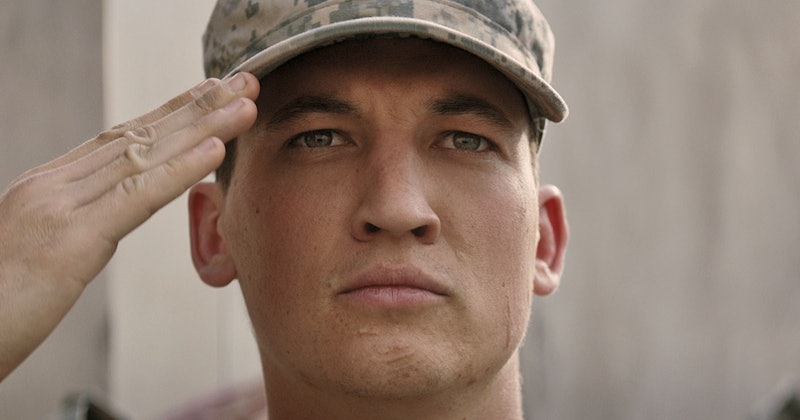 Miles Teller looks every part the military man right now, from his demeanor down to the clothes he's wearing. His infamous Roman numeral tattoo peaks out from underneath the sleeve of his T-shirt as he crosses his arms and puts one boot-clad foot on the coffee table, rattling the myriad cans of soda and glassware neatly lined up for him. But they all remain untouched. An empty Fiji water bottle is the only thing he's paying any attention to, as he fills it with brown spit produced from the chewing tobacco in his mouth. If you didn't know any better, you'd think he was deep into filming some kind of intense army movie. But production wrapped a long time ago on Teller's military veteran drama Thank You For Service (in theaters October 27), and he's not playing any role right now.

The 30-year-old actor is relaxing on a couch in a room in the Four Seasons Beverly Hills doing press for one of the two films he's promoting simultaneously (the other is firefighter drama Only the Brave). It's clear he's feeling the exhaustion of pulling double duty — he complains about having to spend the rest of his Sunday flying back to New York to continue his nonstop press tour, but he knows it's worth it. He wants to get as many eyes as possible on this film and the important issues it raises from the high rates of veteran suicide to the lack of resources for veterans when they return home from service.

This is quite a new kind of role for Teller, and one audiences might be surprised to see him playing after years of hard-partying, narcissistic, jerk characters like the ones he brought to life in War Dogs, That Awkward Moment, 21 & Over and Project X. "The projects you get in your 20s are reflecting where you're at in your 20s, right?" he asks, eyes drifting to check the score of the football game playing on mute on the TV in the corner of the room as he reminisces on his previous work. "You're a little more self-absorbed, you don't have a lot of responsibility."

Citing Leonardo DiCaprio as his ideal career idol, Teller is working to cultivate that same kind of professional reputation, despite the less-than-stellar image that has plagued him over the years, so he can collaborate with the best directors and hand pick his roles and scripts moving forward. But for now, he knows he's lucky to get the projects he's been offered, especially when he gets ones like this that allow him to show a more mature, responsible side.

"I've been awarded great opportunities and directors have taken a chance on me and that's how this [film] happened," he says. "This fell in my lap and I was looking forward to doing something that was this type of material, a really complex character and I just connected to it emotionally."

Adapted from Pulitzer Prize-winning journalist David Finkel's novel, Thank You For Your Service follows the Army’s 2nd Battalion, 16th Infantry Regiment as the soldiers return home from Iraq — into what the author calls the "after-war." Through the eyes of Sergeant Adam Schumann (Teller), the film explores the trauma haunting America's soldiers, the veteran suicide crisis and the bureaucratic nightmare veterans find while trying to seek out help from Veterans Affairs.

Teller finds it "disgusting" to see the kind of treatment the men and women from the military receive after coming home. "A lot of my buddies are in the military and I see it as one of the most honorable professions that we can have," he says. "So for this, it's not like I could just [puts on a southern accent] smoke a cigarette and shoot guns, all tatted up with Credence Clearwater Revival playing. It's not like this Vietnam movie where I'm playing a badass. We're showing these guys once they get home and for me, it was a very intimidating project."

At first, the thought of portraying a veteran suffering from PTSD — "with all these flashbacks and shit" — scared Teller. But he came to realize "that's just a very ignorant surface-level interpretation of it."

"The more I thought about it and the more I read the script, I fell for Adam," he says. "These guys come back and are dealing with an immense amount of trauma, they're in two places at once. So it went from intimidation and uncertainty to feeling like I wanted that responsibility. I wanted to help."

Through boot camp training and getting to know the real-life Sergeant Schumann, who Teller continued to consult throughout filming, "I was nervous every day of just f*cking it up." Calling it "a tight rope walk the whole time," he knew that even scenes where Schumann was just making breakfast for his family weren't simple as the subtext has to show so much more.

"These guys are ducks – on the surface they're all calm, cool and collected but underneath the water they're paddling so much just to stay afloat," he says. "Twenty-two vets a day are committing suicide because they just can't cope with what they did over there."

The filmmakers went through painstaking efforts to make the movie authentic and pay their respects to real veterans, both men and women, despite the movie only focusing on male veterans. In the scenes where Schumann and his fellow soldier Tausolo Aeiti (Beulah Koale), now dealing with the aftermath of the bomb explosion that left him with a traumatic brain injury, wait for their turn to be seen in the VA, the waiting room is filled with real-life male and female veterans instead of the usual background extras.

"Veterans can recognize other veterans so we didn't want to Hollywood-ize this at all," Teller says of casting those women and men. "We were making this movie for the people in this movie first – the real life people the characters are based on – and that community then second. There are millions of veterans in our country who are dealing with mental health issues and not getting help they need so hopefully this can help."

Since Thank You For Your Service only focuses on the men who serve and their wives' struggles as they realize the men who came home from war are not the husbands they sent off, it's not that hard to wonder if the film would change if told from a female veteran's point of view, but Teller quickly assures that it wouldn't.

"Then the man would be the support system, you know?" he says. "These women in our film, they're keeping everything together while the guy's gone and when he's back, she's got to deal with a changed person. So I don't think it would change [if the genders reversed]. I've been able to go to a few different VA programs, outpatient programs in DC and there's no difference. Gender makes no difference."

More than anything, Teller wants to "stir things up" with Thank You For Your Service. "There's always more to be done," he says, upset that The Pathway Home program that helped Schumann and Aeiti in real life was shut down due to lack of funding. "There's no special bullet or magic number of pills to make this go away. This is a day-to-day struggle for these guys and it never goes away."

So while the film is only in theaters for a short time, audiences can make a lasting impression by donating to the VA here. 100 percent of donations go toward supporting Veterans. No matter how the movie performs, it can still make a difference in a meaningful way.

More like this
Lauren Lyle Is Keeping The Contents Of Karen Pirie’s Bum Bag A Mystery
By El Hunt
On 'The Handmaid’s Tale,' Christine Ko Fights Back
By Gretchen Smail
A New Scooby-Doo Movie Confirmed Velma Is Gay & Twitter Is Pumped
By Radhika Menon
Everything You Need To Know About ‘Black Panther: Wakanda Forever’
By Bustle Editors
Get Even More From Bustle — Sign Up For The Newsletter