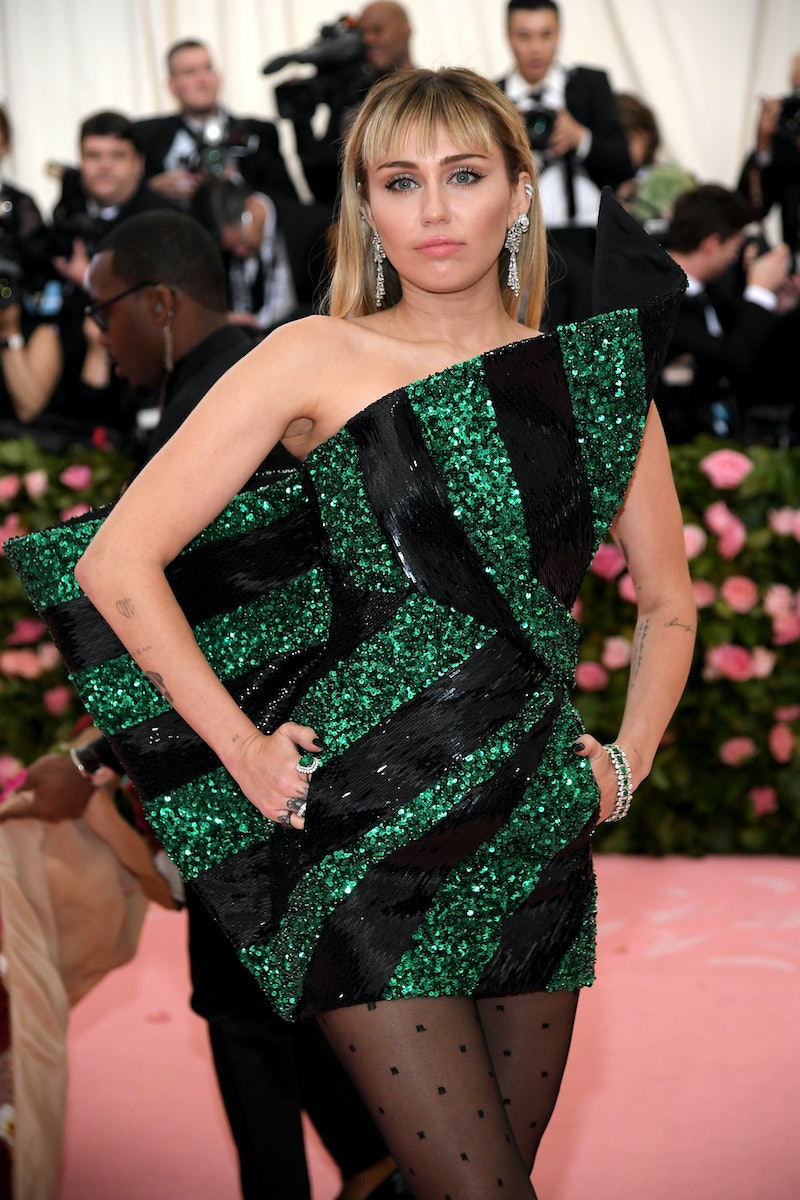 If "Nothing Breaks Like a Heart," then nothing excites the music scene like new music from Miley Cyrus. The former Disney star performed Saturday, May 25, at BBC Radio 1's Big Weekend in the U.K. — and teased some new music in the process. Cyrus performed three new songs during the gig, giving fans their first real peek at her next album, which she's been teasing on Instagram since early May.

Per Rolling Stone, Cyrus reportedly debuted three new tracks, titled "Cattitude," "Dream" and "Mother's Daughter." The upcoming Black Mirror actor also re-vamped one of her biggest hits for the event, singing "We Can't Stop" with Charli XCX. In addition to hearing new music, those in attendance at Radio 1's Big Weekend also got to hear more about Cyrus' role in Black Mirror Season 5.

"This is the story of females in the music industry," Cyrus declared, according to Rolling Stone. "I understand everyone's gone through this but I do think for females in the industry… it's hard to be taken seriously. People assume that if you're not wearing a body suit and singing pop music, why would anyone want to see you." Clearly, the performer is going in new directions both musically and in her acting career.

Cyrus previously revealed that her new album will be titled She Is Coming, and it could be released as soon as May 31. While her three new songs may not be available for download yet, they could all be headed our way in only a few days. Her album roll out began with a series of short video snippets on May 9 and, per usual with the enigmatic singer, it's difficult to decipher what the exact vibe of the music will be. Items such as fruit, a bee, and a whale have all been spotted on her feed, but her three new songs might provide more insight.

One track Cyrus performed (perhaps the first single?) was "Mother's Daughter." Cyrus posted a video of her performing this high-energy song to her Twitter and Instagram. "SHE IS COMING! SHE IS MOTHER'S DAUGHTER!," Cyrus proclaimed, alongside a black heart on her social media. Per Rolling Stone, some of the lyrics include: "Hallelujah, I'm a witch / I'm a witch, hallelujah / Swish Swish, I'm a three point shooter. Hallelujah, I'm a freak / I'm a freak, hallelujah / Every day of the week I'ma do ya."

Then Cyrus returned to some of her rapping days with the song, "Cattitude," where she name-checked high profile figures from Elon Musk to Beyoncé. She even raps the lyric, "I love you Nicki, but I listen to Cardi." At one point, Cyrus says, "Turn up your gratitude / Turn down your attitude / I love my—I mean I got cattitude!" (Who else weirdly thought of the song "Bratitude," from 2007's Bratz movie? No one? OK.)

Cyrus' third song was "Dream," and it has a slower, more hypnotic vibe. With lyrics such as, "Drugs rule everything around me / Wake up with new tattoos on my body," the musician seems to be digging deep for this ballad. Cyrus, who married actor Liam Hemsworth in December 2018, has been open about how her relationship to recreational drug use is ever evolving. No topic ever seems off the table for Cyrus, so her addressing this in new music makes sense.

As May 31 quickly approaches, Cyrus is coming in like a "Wrecking Ball" with your new summer playlist. Based off of these three songs alone, it's not hard to picture a "Party in the U.S.A" once the rest of the album drops.