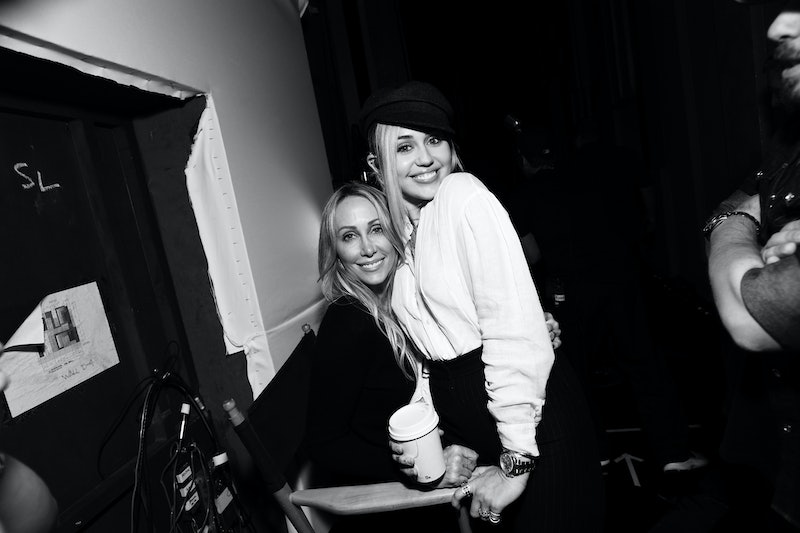 Miley Cyrus fans everywhere got a treat on May 31 upon the release of her latest EP, She Is Coming. And one new track in particular has a tribute to the singer's biggest fan. Miley Cyrus' mom Tish Cyrus gets a shoutout on "Mother's Daughter," which, naturally, focuses on the mother-daughter duo's incredibly strong bond.

In her new song, Miley sings about how she gets her rebellious streak from her mom, "Don't f*ck with my freedom / I came up to get me some / I'm nasty, I'm evil / Must be something in the water or that I'm my mother's daughter.” Clearly, Tish has been a major influence on her daughter, particularly when it comes to her outspoken and confident ways.

Now, given the singer's close relationship with Tish, it shouldn't come as a surprise to see that she's released a song in tribute to the woman who helped make her who she is. In addition to listening to "Mother's Daughter," fans can also head right to social media to get a glimpse of their sweet mother-daughter relationship. On May 31, in honor of her daughter's big music release day, Tish, who also happens to be Miley's manager, posted a throwback photo of herself and her mini-me, captioning the photo simply with "She Is Coming" and the appropriate hashtag, "mothersdaughter."

Not only do they share such a close bond, but the mother-daughter pair actually share quite a few similarities, even ones they might not even be aware of. In a May 2017 interview with Refinery29, Tish related that she was unsure of where Miley got her abundance of self-confidence. She said:

"Miley is who she is, and honestly I don't know where she got that, because I'm a little more sensitive. But somehow I did raise a strong, amazing person that’s self-confident and really doesn't care what people think."

Despite her uncertainty, and based on both Tish and Miley's outspokenness when it comes to political issues, I'd say that the "Nothing Breaks Like a Heart" singer has definitely got a fair share of her strength and confidence from her mom.

Elsewhere in her Refinery29 interview, Tish described that her children, Miley, Brandi, Trace, Braison, and Noah, "are flipping amazing, and I did something right." She continued to describe the connection that she has with them, saying that she's just as much of a friend as she is their mom:

"A lot of people say you can't be your kids’ friend. I think I really found a way to be their mom when they were younger, and then when they were older, feel like a friend. I've always been honest with them — I've never told them just what they want to hear. I think...I hope, that that’s why they trust me so much.”