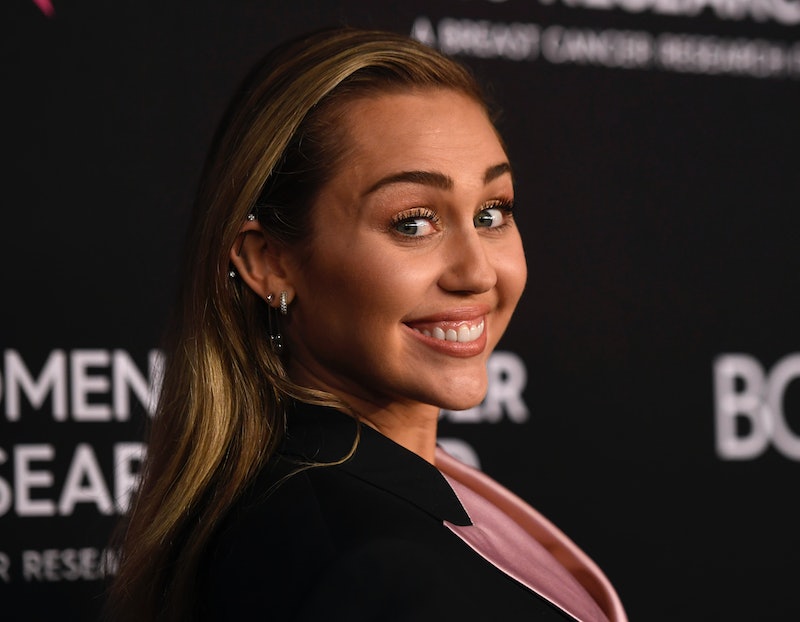 Because pitting women against each other is so 2000 and late, Miley Cyrus just shut down rumors about her, Selena Gomez, and Demi Lovatobeing competitive with one another. In an interview with Capital FM on Tuesday, May 28, the “Wrecking Ball” singer set the record straight while discussing her track “Cattitude” from her upcoming EP SHE IS COMING, which officially drops on Friday, May 31.

“Cattitude” references the feud between Cardi B and Nicki Minaj with the lyrics, “I love you Nicki, but I listen to Cardi.” On the heels of the song’s debut at BBC Radio 1’s Big Weekend, Cyrus has made it clear that she means no ill will against the rappers despite the lyrics. While doing so, the singer also shut down all competition rumors between herself and her fellow Disney Channel alums.

“I think that you’re allowed to enjoy two artists that feel in a similar lane. I grew up collaborating with Demi and Selena. There was never any competition. Ariana [Grande] is one of my best friends. When you are authentically yourself, no one can be you, so you’re never worried about someone stealing your place because it can't be taken. I think that what they do is so different from each other — that's why they both get a crown. They don't have to share, they don't have to break it in half. There's no reason to fight over it. They're both queens."

Following the debut of “Cattitude,” Cyrus took to social media to poke fun at the Cardi and Nicki lyrics. In a May 25 Twitter post, she trolled herself by referencing her fellow Disney Channel alums Gomez and Lovato, writing, "I love you Selena but I listen to Demi.... @selenagomez @ddlovato” accompanied by a dancing gif.

Twitter user @selsuality responded to Cyrus with a hilarious troll of her own, writing “i love you hannah but i listen to mikaila” — a reference to Gomez’s guest role as Cyrus’ fictional rival on Hannah Montana.

Following the initial tweet, Cyrus continued with more takes on the lyrics. “I love you Miley but I listen to Hannah …," she wrote.

She also referenced the comparisons between her and “Thank U, Next” singer Ariana Grande, tweeting, “I love you me but I listen to Ari .”

Cyrus' SHE IS COMING drops on Friday, May 31, the first project since her 2017 album Younger Now. Along with "Cattitude," Cyrus unveiled two additional tracks from the upcoming EP, "Mother's Daughter" and "Dream," at BBC Radio 1’s Big Weekend. On May 27, Cyrus took to social media to tease the black-and-white cover art for SHE IS COMING, where she rocks a t-shirt that reads, "Never mind the bollocks."

More Cyrus is coming soon. And, oh — do you hear that? It's the sound of feud rumors being put to rest.

More like this
The Spice Girls Just Dropped A Brand New Music Video
By Sam Ramsden
Everything To Know About Taylor Swift’s 10th Studio Album, 'Midnights'
By Grace Wehniainen and Jake Viswanath
How Ghosts Inspired Kesha’s New Music
By Jake Viswanath
Beyoncé’s Special Tribute To Sister Solange Was Both Touching & Hilarious
By Stephanie Topacio Long
Get Even More From Bustle — Sign Up For The Newsletter