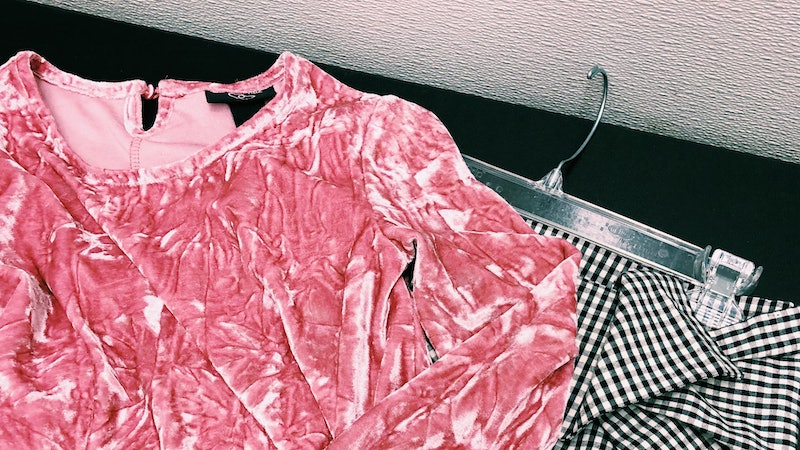 Shopping is a personal thing, but apparently an entire generation has something sartorial in common. According to ThredUp's 2018 Fashion Resale Report, millennials thrift more than any other generation — but they are also the most wasteful when it comes to fashion. Yes, the generation of impulse buyers has found a way to offset the habit, and it could just change the world.

Millennials are the most fashionably wasteful generation, according to the ThredUp report. The secondhand resale website found that people from ages 18 to 34, on average, only wear an item one to five times before discarding it. They are also the most impulsive shoppers. But the generation is taking everything they know and love about shopping and finding a way to give unwanted clothing a second life through thrifting.

Spoiler alert: It's helping more than just their wallets.

In case you're not familiar with the term, thrift shopping is buying something pre-owned. There are different ways to get involved. Some visit in-person stores to get their fashion fix, while others use websites like ThredUp, TheRealReal, and Poshmark to resell old clothing.

All of the secondhand fashion options have their own terms and conditions, but circle around one main goal — resell clothing for money.

According to the ThredUp report, one in three women shopped secondhand last year. That's 44 million women buying secondhand in 2017 as compared to 35 million the previous year. The market is growing fast, and it's leaving more room in people's wallets and closets than ever before.

That's partly thanks to websites, like ThredUp, that remove the stigma from once deemed hand-me-downs. Millennials are able to use their same shopping tactics — finding great deals at places like Zara and J. Crew or buying on impulse — and turn around to resell the items that they get bored with.

It's also partly because of the new fashion habits of millennials. ThredUp found that while the generation is known for its fashion waste, it's also know for eco-conscious habits as well. According to the study, 77 percent of millennials want to buy from environmentally-conscious brands. They're also more likely to switch to thrifting for environmental reason, compared to other generations.

The mindset is paying off for more than just millennial wallets, too. When the generation that buys clothing changes how it thinks about shopping, magic happens. According to Vogue editor Emily Farra, "fashion is the second-most polluting industry in the world, surpassed only by petroleum." ThredUp found that the life of an item is extended by 2.2 years if sold secondhand, which reduces the carbon footprint by 73 percent.

Basically, thrifting can save the planet. The ThredUp study states that if everyone bought secondhand for an entire year, they would save enough water to supply California for 14 years. On average, the average American throws away about 80 pounds of clothing per year, according to The Balance. Taking some or all of those items and reselling instead could completely change the world.

Of course, there's the obvious reason of thrifting saving you more money as well. ThredUp found that switching to thrifting for an entire year could save you an average of $2,420. That's enough for a bi-monthly massage or a cappuccino every single day, AKA a whole lot of cash.

People thrift for different reasons, but the brand found that the spark happened after the recession in 2008. It's not about just getting a great deal or saving the planet. ThredUp found that 66 percent of thrifters use the tactic to "buy better brands they would otherwise never pay full price for" and that 13 percent of shoppers are actually millionaires.

Everyone wins when you thrift. Your wallet gets fatter, the world gets happier, and clothing gets a new life. So even if millennial shopping habits aren't changing, the world is.